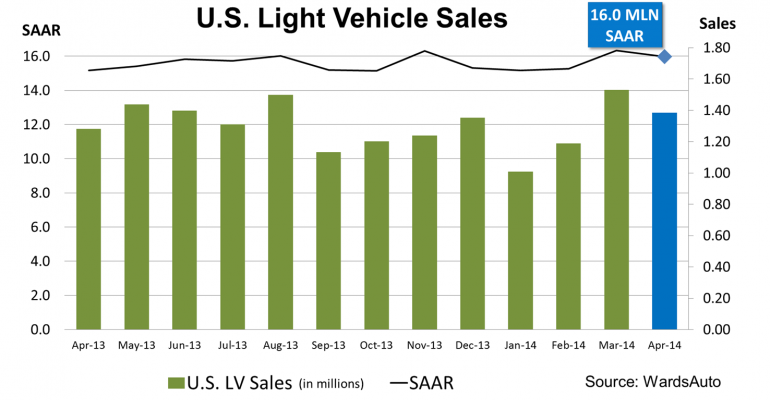 Large pickups, SUVs and vans combined for a 7.2% gain over year-ago, while share of the three segments increased to 15.8% and bucked seasonal trends by rising from March.

April U.S. light-vehicle sales returned to trend with a 16.0 million-unit seasonally adjusted annual rate, after surging in March to 16.3 million following a slow start early in the year.

It was the first time in the post-recession era U.S. LV sales reached the 16 million SAAR level in successive months, as solid economic fundamentals, pent-up demand, well-stocked dealers and some increased incentive activity all pitched in.

The strong results of the last two months lifted the year-to-date SAAR through April to 15.7 million from 15.2 million at the end of February. The 4-month 2013 SAAR was 15.2 million.

The biggest segment group, CUVs, continued to get bigger.

Rising fuel prices, which according to government data increased from the prior month for the fifth straight time in April and were above the same year-ago month for only the second time this year, did not appear to impact segment mix. April sales of all small LVs were up only 1.7% from year-ago, and market share declined to 23.2% from 23.7% in like-2013.

Large pickups, SUVs and vans combined for a 7.2% gain over year-ago, while share of the three segments increased to 15.8% from like-2013s 15.3% and bucked seasonal trends by rising from the prior month’s 15.0%.

Large SUVs, on the strength of General Motors’ new ’15 models and a surge in Ford Expedition deliveries, increased 18.1% from April 2013. After falling 14.5% from year-ago in the first quarter, GM’s large SUV deliveries shot above year-ago 17.4% in April and the year-to-date total improved to just a 3.2% deficit vs. like-2013.

The pricier segments of the Luxury Car group continued to fare well. The Middle Luxury segment increased 14.1% over like-2013, Upper Luxury topped year-ago by 4.3% and Luxury Sport, mostly on the strength of the redesigned Chevrolet Corvette, increased a whopping 41.2%. Sales of Lower Luxury cars declined 10.0%.

Most automakers reported gains over year-ago.

Nissan, as usual, recorded a precipitous decline in April from March and dropped below Honda in sales volume for the first time this year. However, Nissan’s sales increased a solid 13.8% over same-month 2013, and its year-to-date results were up 13.0%.

Fiat-Chrysler posted its 49th consecutive year-over-year increase with sales up 9.2%. Volume from the all-new Jeep Cherokee and Ram ProMaster helped, as did strong results for the Ram pickup and long-in-the-tooth products such as the Jeep Compass, Patriot and Wrangler, Chrysler 300, Dodge Journey and its minivans.

Thanks mostly to its strong truck showing which offset muted results in cars in part due to fewer fleet sales, GM April sales increased 2.8% over same-month 2013 and its market share jumped to 18.5% from March’s 16.7%.

Ford continued to struggle with its cars and CUVs, although the company says that is largely due to its strategy of offering fewer incentives relative to its competition. Ford’s total April sales, down 4.6%, declined from year-ago for the third time in the last four months.

Honda also continued its slide as sales dropped a huge 2.8% from year-ago, pushing its year-to-date results to 2.3% below January-April 2013.

After declines in the first two months of the year, Toyota’s sales climbed 8.9% over year-ago in March and 9.0% in April. Its year-to-date deliveries were up 2.1%.