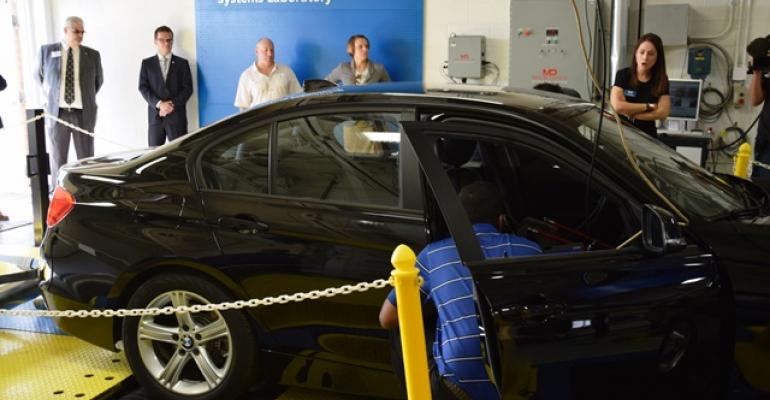 A new dynamometer at Lawrence Tech&rsquo;s campus will allow students and JCI engineers to work jointly on powertrain systems, such as a new dual-voltage stop-start system coming to market in 2018.

SOUTHFIELD, MI – Battery supplier Johnson Controls now has its first full-chassis dynamometer in Metro Detroit, and it will be used for much more than testing next-generation powertrain systems intended for production vehicles.

The $700,000 dyno is located here in the all-new Johnson Controls Vehicle Engineering Systems Lab on the campus of Lawrence Technological University, a private engineering school whose graduates feed the auto industry at a steady pace.

LTU students and JCI engineers will work side-by-side on powertrain systems with an emphasis on battery technology. JCI is the world’s largest automotive battery manufacturer, as well as a leader in battery-intensive stop-start systems.

MaryAnn Wright, an LTU trustee and JCI vice president-engineering and product development, views the work at the university as an investment.

“Like any investment, we expect a really good return,” she says at the dyno’s dedication. “We want great engineering and development coming out of facilities like this to help us accelerate our products into the market. Equally important is for us to develop the next generation of talent.”

Asked how students and JCI engineers will split time with the dyno, Wright says the workload for both groups will be seamless and integrated. JCI also will fund research to be done with the dyno, and students will be assigned projects and other work.

“We have many of our engineers over here working with students and faculty,” she says, adding that JCI has similar facilities used by students at the University of Wisconsin in Milwaukee, where JCI is based.

“We will send out proposals, and the best teams will get funded research,” Wright says. “So on very specific things, we may want fresh ideas or some new way of looking at it. There will be things that are really important to us strategically.”

Much of the research will center on electric and hybrid-electric vehicles, with an emphasis on stop-start systems, which are growing in popularity in the U.S. and worldwide.

JCI has been in the stop-start market since 2007 and produced 14 million of the systems last year, Wright says.

Stop-start systems today rely on 12V lead-acid absorbent glass mat batteries that are capable of deep cycling and frequent charging and discharging. Wright says JCI has produced 30 million AGM batteries for stop-start systems, and that reliability in the field has been excellent.

Conventional stop-start systems are designed to yield up to a 5% fuel-economy gain as the engine shuts off at stoplights and at idle.

At the dynamometer dedication here, JCI offers test drives in a ’12 BMW 328i with two 12V batteries, a standard lead-acid unit installed in the trunk to start and restart the car and lithium-ion cell under the hood allowing the vehicle to capture more energy and use it later when needed.

Under development with several global automakers, Wright says the system will come to market in 2018.

The Li-ion battery acts as a supplement by providing energy for high-powered accessories such as electric power steering, brake-by-wire and climate control.

Together, the two batteries allow the engine to stay off for longer periods – as long as two hours, according to JCI engineers – while accessories maintain full power, extending fuel-economy gains to 8%.

Wright says she is aware of the system achieving shorter engine-off cycles of about two minutes. That is long compared with many conventional stop-start systems, which may re-spark an engine within 20 seconds depending on the battery’s state of charge.

“What we are doing is sharing the load, optimizing the load,” Wright says. “You want the particular device to do what it does best.”

During the test drive, the engine cycles off as advertised and restarts with a slight, unobtrusive burble. A display screen rigged up for the demo shows power drawn from the batteries when the engine shuts off, as well as energy being regenerated through the alternator back to the batteries during long, steady coasting and deceleration.

Importance of Avoiding ‘Threshold of Electrocution’

Above that is the high-voltage “threshold of electrocution,” which adds weight and packaging challenges while requiring heavier wiring and redundant software, electronics and mechanicals.

“None of those things are value-added to the system,” she says. “If you get it below 60V, then you are focusing on performance, and that’s defined as fuel economy, emissions or powering accessories. You’re taking away that overhead.”

A Toyota Prius and Ford Fusion Hybrid, for instance, have 330V electrical systems.

Wright refers to high-voltage mild-hybrid systems from General Motors and Mercedes-Benz that can achieve fuel-economy gains between 10% and 15%, but she says those systems require extensive vehicle integration, adding weight and cost.

The cost benefits are significant when comparing JCI’s dual-voltage system with a high-voltage mild-hybrid setup.

“We’re talking hundreds of dollars versus thousands of dollars,” she says. “And you can package (JCI’s dual-voltage system) inside an existing vehicle architecture. Your powertrain doesn’t have to change, or your sheet metal structure or crash kinematics.” However, the system may require a larger alternator to accept more power.

The industry also is migrating toward low-voltage 48V micro-hybrid systems capable of fuel-economy gains of up to 15%, Wright says.

In the meantime, the new dynamometer that now belongs to LTU will play a role in development of these next-generation stop-start system, and JCI is bound to harvest some young talent in the process.

What Would Mao Drive? Regardless, Today’s Chinese Like Luxury Cars
May 13, 2015