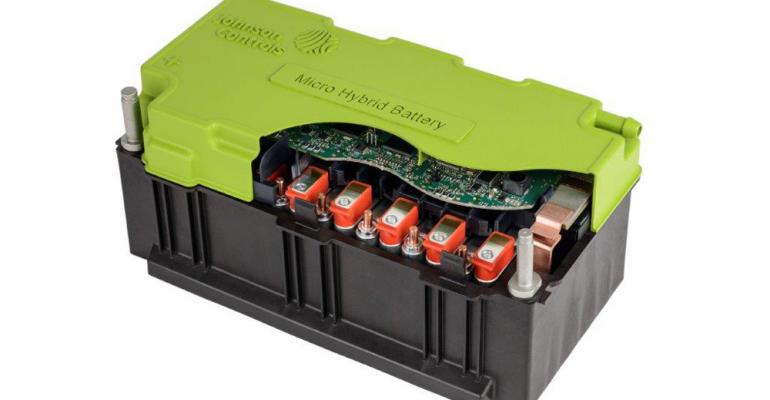 The battery supplier&rsquo;s micro-hybrid systems are expected to go into production in 2017 or 2018 in Europe, with global adoption starting after 2020. &nbsp; &nbsp;

Unlike EVs and HEVs, they will see soaring adoption rates and production in the tens of millions within the next four years, JCI says.

Installed on vehicles with conventional gasoline or diesel engines, stop/start and micro-hybrid systems improve fuel economy by shutting down the engine at stoplights and other opportune moments.

Some 40% of new U.S. vehicles will use the systems by 2018, with an 80% adoption rate in Europe and about 50% in China, predicts Brian Kesseler, president of JCI’s Power Solutions business unit.

Typical stop/start units can improve fuel economy as much as 8%, Kesseler says. More powerful micro-hybrid systems can boost efficiency up to 15% by shutting down the engine more frequently and for longer durations.

The systems already are popular in Europe, where fuel prices are twice that of the U.S., because they provide real-world savings that are apparent to drivers. The systems have had a slower rollout in the U.S., in part because the official U.S. EPA fuel-economy testing regime does not recognize stop/start benefits. Many U.S. consumers also remain skeptical.

Johnson Controls is a major global supplier of conventional lead-acid and advanced lithium-ion batteries to the auto industry.  It already has sold millions of lead-acid batteries designed to accommodate the special energy demands of stop/start systems as well as Li-ion batteries for HEVs made by Mercedes-Benz and others.

Kesseler says Johnson Controls now is pitching a concept to automakers for a micro-hybrid system that offers up to 15% improved fuel economy yet costs only hundreds of dollars, a fraction of the cost of current full hybrid systems that can add $4,000 to a vehicle’s price.

The idea features a dual-voltage network that includes a conventional 12V lead-acid battery for operating a vehicle’s low-voltage devices plus a 48V circuit that uses an additional Li-ion battery to power the stop/start motor.

Both batteries are relatively small and do not require extra space under the hood.

A key part of this low-cost strategy is the new Li-ion battery is much easier to replace than today’s over-engineered hybrid batteries. Current hybrid batteries are designed to last the life of the vehicle, 10 years or more, because they are so expensive.

Johnson Control’s new Li-ion battery won’t last that long, but it is a fraction of the price. The micro-hybrid system also keeps voltage below 60V, which is the level where expenses for all systems and components escalate.

This dual-voltage strategy can serve as a crucial bridge to full hybrids down the road for many models. Kesseler says he is having “great conversations” with prospective customers and expects the first systems to go into production in 2017 or 2018 in Europe, with global adoption starting after 2020.