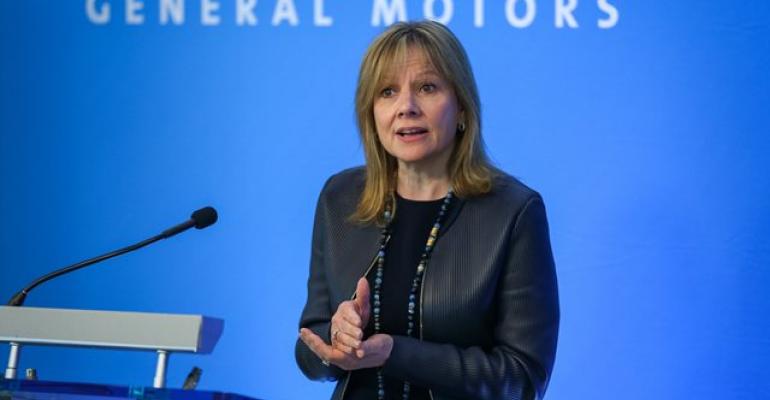 A stagnant stock price, juxtaposed against the soaring shares of startup EV maker Tesla, motivated Greenlight Capital to push an unsuccessful stock-split proposal to a vote of shareholders.

DETROIT – General Motors Chairman and CEO Mary Barra says a second shareholder bid in two years aimed at unlocking financial value from the company does not frustrate its leadership but instead motivates the automaker to outperform the industry with its core business and make smarter bets on the future of transportation.

“We have to keep earning our way,” Barra says ahead of GM’s annual meeting here, where a proposal from major shareholder Greenlight Capital to divide the company’s stock into separate share classes was soundly defeated.

“So it’s not only having an exceptional core business that’s going to outperform in any downturn, but it’s also in the transformative technologies,” she says.

Despite GM’s wins in the traditional market according to third-party evaluations, the successful rollout of emerging technologies such as the Chevrolet Bolt EV, ventures into new mobility and billions of dollars in record profits since bankruptcy eight years ago, Wall Street continues to undervalue its shares. GM’s stock price has budged little from $33 per share after its 2010 initial public offering.

A stagnant stock price, juxtaposed against the soaring shares of startup EV maker Tesla, motivated private-equity firm Greenlight Capital to push its stock-split proposal to a vote of shareholders. The effort came two years after a group of hedge funds successfully persuaded GM to return $5 billion to investors in the form of buybacks and to more regularly return cash. The automaker hired two leading consulting firms to evaluate the Greenlight proposal and both deemed it unfavorable, as did a pair of investment-credit houses.

Barra suggests the shareholders’ proposals are not a distraction to the company. She says GM values their input and finds motivation in their ideas.

Barra suggests GM has no intention of spinning off its growing mobility unit, another idea investors and industry analysts have proposed as a way to unlock value and provide a clearer view of the automaker’s future financial performance.

“We continually are looking at ideas,” she says. “We do want to unlock the value, but we want to make sure we do it in a way that is going to create long-term value from a company perspective.”

Barra reiterates GM’s plan to allocate capital at home and abroad only where there is evidence of future return on investment, evidenced by decisions to exit unprofitable markets such as Europe with its divestiture earlier this year of longtime German unit Adam Opel.

“We need to make sure as we deploy one dollar of our investors’ capital that (it) is going to deliver an appropriate return,” she says. “We analyze the countries and the regions and the segments we operate in.

“There are some operations we are still working to improve, but we think we have very good plans to do that,” she adds. “This is a continual evaluation to make, because our business also is being transformed. We have a very active capital-allocation process, where we look at deploying our owners’ capital to the most important initiatives that are going to generate the right return today and in the long term.”

“We understand (climate change) and we believe in the science, and we are committed to taking actions to reduce emissions,” she says, citing GM’s intention to draw all of its energy from renewable sources by 2050 and to sell more zero-emissions products such as the Bolt.

“We are going to take actions because we believe this is an industry that has given people freedom and mobility. We have a big responsibility and we will take these steps regardless.”