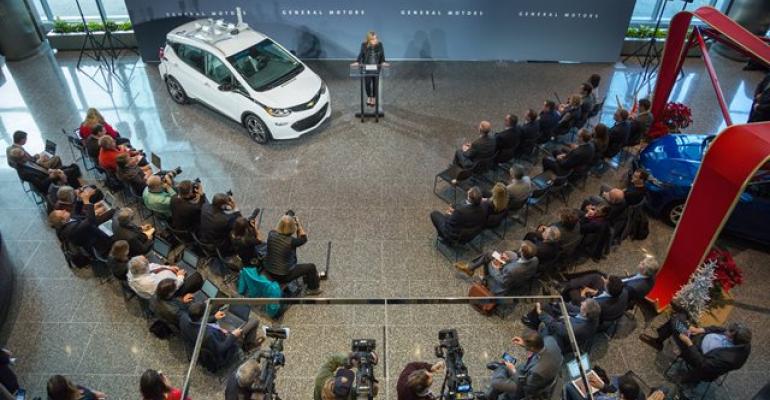 Like many topics in the automotive industry, the position of President Trump on autonomous driving and other future mobility technologies has drawn the interest of industry-watchers

General Motors Chairman and CEO Mary Barra says the automaker is dashing full speed into the new-mobility future with its Maven car-sharing startup and autonomous-driving experiments.

“We made remarkable progress last year in technology and innovation, especially in the game-changing technologies that are helping us redefine personal mobility,” Barra tells Wall Street analysts during a conference call this week.

GM launched Maven last year as one of the first OEMs to enter the car-sharing business. It operates in 17 markets with 23,231 members, who use an app on their smartphones to locate a GM vehicle nearby and rent a Chevrolet, Cadillac, Buick or GMC vehicle for less than $10 an hour. Maven users have logged 73.68 million miles (118.6 million km).

The unit has two other elements: Maven Home, which provides car-sharing to closed residential communities, and Maven Business, which caters to drivers of Lyft and Uber ride-hailing services. In California earlier this month, Maven Home and Maven Business began deploying the Chevy Bolt EV. The 238-mile-range (383 km) electric vehicle is seen by the automaker as a key addition to those fleets.

Maven operates a fleet of about 10,000 vehicles in the U.S., and Maven Business has 5,000 at its disposal. GM plans to add hundreds of Bolt EVs to the business fleet this year, Barra says.

Maven gives car-sharers and ride-hailers a chance to experience GM products they may otherwise not be familiar with, especially people on the import-dominated coasts. In addition to the revenue GM books from Maven, the automaker thinks users someday may buy a GM product after their sharing experience. GM also sees Maven as a channel for more cost-effectively managing vehicles coming off lease and cars it buys back from rental companies.

Perhaps as importantly, it gives the automaker an early foothold in the future of transportation where, according to the Center for Automotive Research in Ann Arbor, MI, the traditional ownership model will be greatly affected by rapid urbanization, economic growth, rising road congestion, increasing pollution and changing mobility preferences.

“We are learning a great deal about developing transportation as a service in urban markets due to our work with Maven,” Barra says.

The CEO also says GM is making progress on autonomous vehicles. The automaker has leveraged in-house expertise with Cruise Automation, a San Francisco-based developer of the technology it purchased one year ago for $1 billion to put a jolt into its self-driving work. The group is testing more than 40 autonomous Bolt EVs on public roads in southeast Michigan, San Francisco and Scottsdale, AZ.

GM recently released a video where the operator of a Bolt EV selected a random destination using the Cruise mobile app, pushed a button and the vehicle started moving. Those sorts of rides occur hundreds of time per day across GM’s test fleets, the automaker says.

“We’ve accelerated our progress on autonomous (vehicles), and that progress is happening on a weekly basis, not monthly or quarterly,” Barra says.

She declines to disclose how much of GM’s annual engineering investment is dedicated to autonomous research, but tells the analysts more will be disclosed about the program, as well as key milestones, later this year.

And, as with many topics in the automotive industry, the position of President Trump on autonomous driving and other future mobility technologies has drawn the interest of industry-watchers. Barra has met with Trump and his administration at least twice since the real-estate mogul took office four weeks ago.

“We’ve had a very constructive and positive conversation about the regulatory environment and putting safety at the forefront and doing the right thing for the environment, but looking at the opportunities to streamline and enable technology,” she says.

Barra also notes GM’s OnStar unit, which was launched 20 years ago as concierge service and has evolved into a key element of the automaker’s connectivity play, surpassed 1.5 billion customer interactions last year and 12 million OnStar-enabled vehicles now ply roads around the world. Users of the OnStar 4G LTE Wi-Fi hotspot option in the automaker’s volume Chevrolet brand used 4.22 million gigabytes (4,220 terabytes) of data in 2016, an increase of 200% over 2015, GM says.