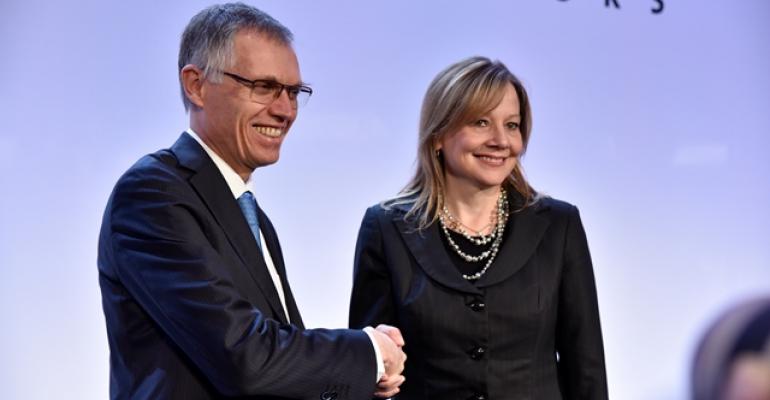 PSA chief Tavares argues the blueprint he used to turn around his company will finish a turnaround of Opel-Vauxhall begun by GM in 2013.

General Motors sees the sale of its Adam Opel and Vauxhall brands to PSA Peugeot Citroen as an opportunity to sharpen the Detroit automaker’s focus on profitability, and while it is a blockbuster for PSA the deal throws the future of several major manufacturing operations and thousands of jobs into question.

In a conference call with investors to discuss the $2.3 billion (€2.2 billion) divestiture of Opel-Vauxhall, which has not been profitable for GM since the 1990s despite numerous restructuring attempts, Chairman and CEO Mary Barra says it will free up more resources for fewer brands and models most profitable today and into the future.

Carlos Tavares, chairman of the managing board of PSA, calls the acquisition a game-changer for the recently near-death French automaker and expects no changes to its now vastly larger manufacturing footprint and employee rolls. But he warns the plan forward for the automaker includes efficiency targets requiring cooperation from its work force, which analysts say effectively leaves the door open for future cutbacks if necessary.

“Some PSA and Opel locations look more secure than others at the 2020 mark, a point at which decisions will need to be made on many next-generation vehicle locations and evidence of success in achieving efficiencies is likely to be seen,” says Ian Fletcher, principal auto analyst at IHS Markit in London.

PSA will inherit 11 Opel-Vauxhall manufacturing sites, including six assembly plants and an engineering center together comprising nearly 40,000 employees. The additions make PSA the No.2 automaker in Western Europe and No.3 on the continent, but also risk swelling costs at a company that just two years ago needed a massive restructuring itself underpinned by a bailout from the French government and China’s Dongfeng.

Tavares argues a $5.2 billion rework of Opel-Vauxhall launched by GM in 2013, a plan that included closing a 52-year-old assembly plant in Bochum, Germany, in 2014, would have put the unit back in the black this year without currency headwinds created by the U.K. voting to exit the European Union.

“Had the Brexit not happened, Opel-Vauxhall would have been break-even in 2016,” Tavares says of a political event Barra characterizes as a “speed bump” on the unit’s path to profitability.

Going forward, Tavares says he will leverage a blueprint he used to resuscitate PSA that focuses on wringing out efficiencies others may have overlooked.

“What we’d like to put on the table to help (Opel-Vauxhall) is all the best practices and everything we have learned from our own turnaround plan that we have implemented over the last three years,” Tavares tells WardsAuto during a conference call with executives from both companies earlier today.

“Everybody is asking me about shutting down plants and all that stuff, (and) it is a simplistic manner of looking at things,” he adds. “There are many, many other things you can improve.”

Tavares cites internal logistics of assembly plants and building cars to an appropriate level of quality the first time to eliminate expensive backtracking for fixes.

“If you shut the plant it just means you did not have enough ideas,” he says. “Each time we did this in (PSA) plants we made significant progress because we trust people. When we challenge people in a fair way and we give them the appropriate benchmarks, people come up with their own ideas and create their own turnaround plan.”

Fletcher of IHS speculates Opel-Vauxhall assembly plants in Zaragoza and Vigo, Spain, as well as Trnava, Slovakia, building B- and C-segment vehicle have a positive future given the popularity of their product and high capacity utilization. However, opportunities may exist to consolidate with other small-car plants in Sochaux and Mulhouse, France, and Gliwice, Poland.

Questions also exist around facilities in Rennes, France, and Rüsselsheim, Germany, due to consolidation opportunities, as well as the U.K. plants of Ellesmere Port over Brexit-related trade uncertainties and Luton because it builds many Renault-designed commercial vehicles.

At the same time, however, Fletcher says the U.K. government is keen to keep those plants viable with a plan underpinned by attracting more parts suppliers to the U.K. to ease any potential future tariffs from the EU.

Investors view the deal positively for PSA, which stands to gain enormous economies of scale in purchasing, engineering and R&D, as well as sales volumes it never would have seen without a solid brand entry in Europe’s No.1 market of Germany.

“In many markets, customers will consider German brands over French brands,” he says, calling any potential cannibalization between Peugeot and Opel quite limited. “For us the deal adds value as long as we keep Opel a German brand and Vauxhall a British brand.”

For GM, the deal unties it from a longtime financial lodestone but also removes it almost entirely from the world’s No.3 market.

GM President Dan Ammann says Opel will continue to supply product to the automaker’s Buick and Holden brands for the foreseeable future.

The deal excludes a GM powertrain site in Torino, Italy, but includes the automaker vehicle-financing arm in Europe. Opel-Vauxhall will continue to use GM-licensed technology until their products migrate to PSA platforms, the automakers say.