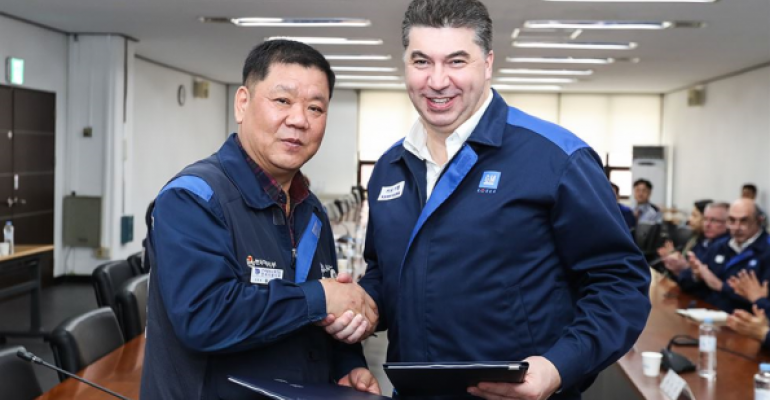 Analysts note it would not be difficult to find a suitor if GM Korea were put up for sale. GM&rsquo;s joint-venture partner in China, for one, has the financial clout to make such an acquisition.

GM Korea management is outwardly glowing about recent steps taken to implement its turnaround plan, including a wage freeze for hourly and salaried workers and a tentative interim financing deal with its junior shareholder Korea Development Bank.

But some analysts are saying it’s too soon to be taking a victory lap. Much needs to be done in the days ahead and even if all parties reach an accord, the company still is in a potentially serious financial situation.

They note that implementing the new wage and collective-bargaining agreement is conditioned on GM Korea obtaining significant new financing from the KDB. The company and the government-controlled bank thus far only have signed a conditional letter of commitment stating their intent.

Asked about progress with the potential $750 million KDB financing package, a GM Korea spokesman tells WardsAuto, “GM Korea welcomes the (tentative) line of credit and looks forward to achieving a binding agreement with KDB in coming days. A binding agreement will enable GM Korea to fully implement its viability plan, including the ratified labor agreement.”

Failure to iron out the financing details with KDB, which owns 17% of GM Korea, would have serious consequences for the Korean automaker and its parent General Motors. In addition to new KDB financing, the parties must agree on a method by which GM Korea can repay its $2.7 billion debt to GM Financial with equity shares in lieu of cash, and the conditions of GM’s proposed $3.8 billion future investment in its Korean operations.

GM headquarters lists the GM Korea restructuring program as a risk factor in the parent company’s 10Q first-quarter report. Signed by both GM Chairman and CEO Mary Barra and CFO Charles Stevens, the report does state that GM expects the $750 million tentative agreement with KDB to become a definitive agreement in the second quarter.

However, under a “risk factor” heading it cautions that, “In the event this tentative agreement is not consummated, we may be required to take further actions to address GM Korea’s financial and operational performance, which could have a material adverse impact on our financial performance.”

In other words, if the deal falters or falls through it potentially could hurt GM’s financial performance. Analysts speculate “further actions” could include divestment of the money-losing subsidiary.

Takers Could Include Shanghai GM

They also note it would not be difficult to find a suitor if GM Korea were put up for sale. GM’s joint-venture partner in China, for one, has the financial clout to make such an acquisition.

In the 10Q report, for instance, GM notes it borrowed $1.3 billion in the first quarter from the SAIC-GM joint venture (Shanghai GM) in China to provide additional liquidity to support operations.

The 10Q report also cites the financial impact of closure of GM Korea’s assembly center in Gunsan on General Motors International as well as the GM corporate parent. It will be closed by the end of May, reducing GM Korea’s production capacity 25%.

GM Korea booked a $942 million pretax special charge in the first quarter related to the plant closure. Of the charge $464 million was written off as non-cash asset impairments. An additional $436 million was for employee separation charges.

GMI’s automotive cost of goods sold in the first quarter tallied $5.77 billion, some 13.6% or $689 million higher than in the comparable 2017 first quarter. The 10Q report attributes a significant portion of the increase to the $924 million cost of closing the Gunsan plant.

In total GM expects to contribute some $1.2 billion in 2018 to pension plans outside the U.S., including payment of pension benefits to GM Korea’s separated employees.

Some potential financial threats are hovering over GM’s distressed Korean subsidiary, as well.

The possible loss to GM through consolidation would be $950 million if the cases, all of which are pending before the Supreme Court of Korea, go against GM Korea.

The hourly worker lawsuits, which involve some 10,000 workers, pose a potential loss of $600 million and the salaried worker lawsuits pose a loss threat of $200 million.

Analysts also have concerns that four years of successive losses and public perception that GM might pull out has eroded the Chevrolet brand’s value in Korea.

Considering the cost of implementing the initial parts of its revitalization program, it is virtually a foregone conclusion that GM Korea will book a fourth consecutive year of losses in 2018.

While the union has agreed to a wage and bonus freeze for 2018, labor costs still are too high to achieve profitability because of previous increases, some analysts believe.