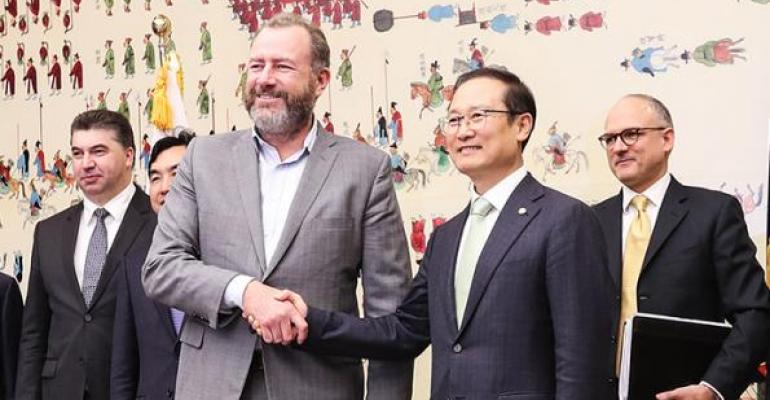 <p><strong>Under the agreement with the Korea Metal Workers Union, GM pledges to add two new vehicles to Korean plants to bring production levels up to 500,000 units annually by 2020 and maintain its Korean operations for the next 10 years.</strong></p>

GM Korea launches its effort to achieve profitability as parent General Motors and the Korea Development Bank tentatively agree to provide a $5.1 billion financial lifeline and hourly workers ratify a contract that freezes their wages and denies them bonuses for 2018.

In addition to the new financing, GM Korea plans a debt-for-equity swap of its current $2.7 billion (2.9 trillion won) of debt to GM by converting the total owed to shares in the company. The KDB does not comment on reports GM is willing to change the terms of the swap so the bank can maintain its current 17% stake in GM Korea.

Under the agreement reached Thursday, GM pledges to add two new vehicles to Korean plants to bring completely built-up production levels up to 500,000 units annually by 2020 and maintain its Korean operations for the next 10 years.

The union also backed off from its opposition to the planned May closing of GM Korea’s underutilized plant in Gunsan. The automaker agreed to provide special retirement packages or job transfers to the 680 workers who had not applied for early retirement and were facing layoffs without pay.

GM’s quarterly report notes closure of the Gunsan plant will result in an overall 25% capacity reduction by GM Korea.

The tentative agreement with the KMWU was reached at 5 p.m. Monday, April 23, just one hour ahead of the 6 p.m. deadline GM had set for filing for bankruptcy. Besides accepting a wage freeze and foregoing benefits that in the past have reached $20,000 per worker, union members also gave up certain benefits.