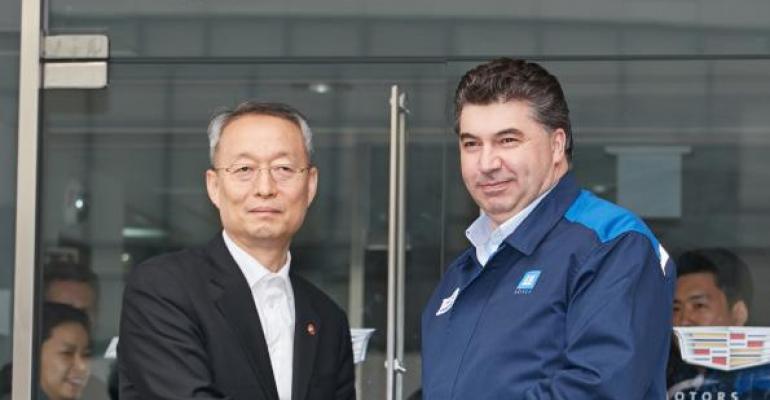 No new talks have been scheduled since an eighth bargaining session scheduled for Thursday, April 12, was short-circuited when the union refused to allow closed-circuit cameras in the negotiating room.

A crucial negotiating session between GM Korea and the Korea Metal Workers Union was canceled when KMWU officials objected to having the meeting monitored on closed-circuit TV.

Parent General Motors has said that if GM Korea does not provide a turnaround and restructuring plan to it and the Korea Development Bank – its two major financial lifelines – by April 20, its money-losing Korean subsidiary will have no choice but to file for bankruptcy.

A new agreement on wages and bonuses for KMWU members is a key to the turnaround plan.

But no new talks have been scheduled since an eighth bargaining session scheduled for Thursday, April 12, was called off over the TV dispute.

The union negotiators include some of the same individuals who ransacked GM Korea CEO Kaher Kazem’s offices when he told them April 5 the company could not provide 2017 bonuses on the scheduled April 6 payment date.

Some of the negotiators smashed and removed furniture from Kazem’s office and held a sit-in demonstration outside his office for 27 hours.

“We want to ensure that safety is an overriding priority, and we are committed to a safe workplace for all our employees,” a GM Korea spokesman says. “We do remain ready to negotiate with the union on an urgent basis, provided the right safety measures are in place.”

Meanwhile, Lee Dong-gull, chairman of the Korea Development Bank, which holds a 17% stake in GM Korea, says a due diligence to determine whether it is feasible to provide GM Korea with interim and new financing will be completed by the end of April. Previously it was anticipated the due diligence would be completed by April 20.

Additionally, Korea’s Minister of Trade, Industry and Energy, Paik Un-gyu, says his agency is expediting a review of GM Korea’s application to have Bupyeong, where its main plants, R&D facilities and headquarters are located, and Changwon, where its Spark assembly and drivetrain plants are located, designated as foreign investment zones.

Paik says no final decision will be made until GM Korea and the union complete their 2018 wage negotiations.

Designation as a foreign investment zone would provide five-year tax-free status for new investments in either location, followed by additional 50% tax reductions in subsequent years.