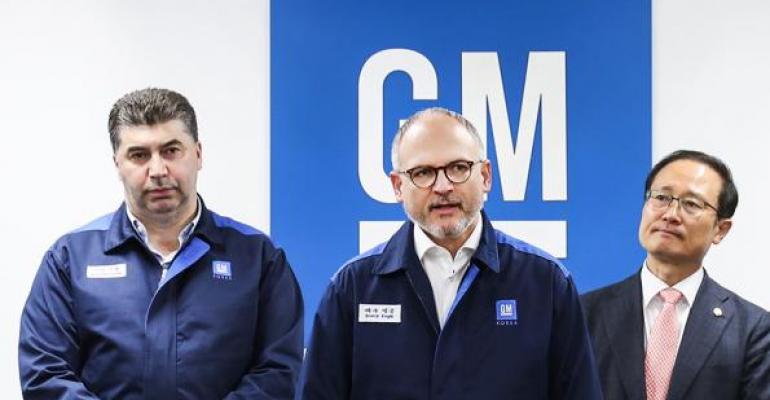 The money-losing General Motors subsidiary had threatened to file for bankruptcy if a deal including a wage freeze was not reached by Friday, April 20. The agreement was the key to a turnaround and restructuring plan demanded by the parent company and the Korea Development Bank, which owns 17% of GM Korea.

In a 12-hour negotiating session, GM Korea and its labor union today reached a tentative agreement that freezes hourly workers’ wages and bonuses and reduces fringe-benefit liabilities for the current year.

The money-losing General Motors subsidiary had threatened to file for bankruptcy if a deal including a wage freeze was not reached by Friday, April 20. The agreement was the key to a turnaround and restructuring plan demanded by the parent company and the Korea Development Bank, which owns 17% of GM Korea.

The automaker demurred after talks were held Saturday and resumed today. After the agreement was announced, the GM Korea board halted plans to vote Monday on filing for bankruptcy protection.

“It was a dramatic day,” says GM Korea spokesman Haeho Park. “There were no sessions held on Sunday, but from 5 a.m. Monday both sides launched negotiations and a tentative agreement was reached at 5 p.m. after 12 intense hours.”

A statement released by the company says a ratification vote by members of the Korea Metal Workers Union will be held Wednesday and Thursday, April 25-26.

“The labor union has demonstrated its commitment, and we continue to work with our other key stakeholders to gain their support,” GM Korea CEO Kaher Kazem is quoted as saying in the statement.

The GM Korea Branch of the KMWU issued no statements after the tentative agreement was announced. Union officials also declined to participate in a news conference following the final negotiating session.

During the weekend members of the Korea Development Bank, the National Assembly, the Ministry of Employment and Labor and other Korean government agencies held separate meetings with management and union officials which were not an official part of the negotiations.

Park notes the unusual role played by National Assemblyman Hong Young-pyo, who represents the Bupyeong district where GM Korea headquarters is located and is a senior member of the ruling political party and chair of the party’s GM Korea Task Force.

“Congressman Hong really did a lot working with labor and management,” the GM spokesman says. “He did not sit at the bargaining table but he met separately with CEO Kaher Kazem and the union chairman often to narrow the gap between the parties during the negotiations.

“The company is in a very serious cash flow situation and has been pushed to the edge of a bankruptcy filing,” Park reiterates. “The labor union agreement really saved the company from the crisis and sets a pathway for a viability plan to be supported by the Korean government and the Korea Development Bank.”

Bank Chairman Lee Dong-gull said last week due diligence will be completed by the end of April to determine whether it is feasible to provide GM Korea with interim and new financing.

A thorny issue had been job guarantees for 680 of the 2,600 workers at the assembly plant in Gunsan, which will be shuttered next month as a first move in restructuring the company.

GM Korea successfully resisted the KMWU’s demand for the workers’ job continuity. The union accepted management’s earlier promise that it would disperse the workers through a combination of early optional retirement packages and job transfers to other plants. The other 1,920 Gunsan workers already have filed for early retirement packages which provide lump-sum wage settlements and continuation of some fringe benefits.

The peaceful resolution of negotiations is viewed with caution by some analysts, as there is no guarantee union members will support the tentative agreement. During part of the negotiations GM banned executives from traveling to GM Korea properties because of concerns about possible union volatility.

After union members ransacked CEO Kazem’s offices following the seventh round of negotiations on April 6, the union signed a pledge not to cause further damage and to negotiate peacefully.

– Reuters contributed to this report.