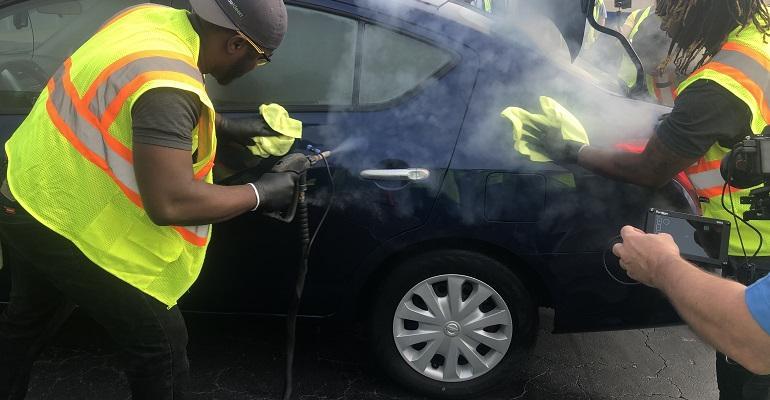 A Motional-Lyft partnership has provided thousands of robotaxi rides to paying customers – with human backup drivers behind the wheel.

Cox says the partnership lays the foundation to support Motional as it plans to expand to other major U.S. cities.

Motional already has partnered with ride-hailing company Lyft to operate the Las Vegas robotaxis. Those are based on a Hyundai vehicle platform and integrated with sensors, computers and software to enable driverless operation.

Motional is a joint venture between Hyundai Motor Group and technology company Aptiv.

Before the formation of Motional, the Aptiv Autonomous Mobility Group spent years testing its autonomous vehicles in Las Vegas.

The Motional-Lyft partnership has provided thousands of robotaxi rides to paying customers – with human backup drivers behind the wheel. That arrangement isn’t expected to change overnight.

Because of the COVID-19 pandemic, the Las Vegas robotaxi operations were suspended last year but resumed in October.

Motional plans eventually to put fully driverless vehicles on public roads, as well as launch a multimarket service with Lyft in major U.S. cities in 2023.

Pivet will coordinate daily, weekly and monthly cleaning and disinfecting of vehicles as well as oversee mechanical work for Motional’s Las Vegas fleet.

RideKleen, a Cox company that is associated with Pivet, will do the cleaning and disinfecting. It operates a fleet of specially equipped trucks to provide portable services as well.

“Motional’s innovation and dynamism in the driverless space, partnered with Cox Automotive’s geographic reach and fleet service expertise, create a potent force in the industry.”

Motional says it’s partnering with Pivet because of its national footprint and reputation.

“In 2020, we laid the technical and commercial foundations to bring robotaxis into our cities at scale,” says Gretchen Effgen, a Motional vice president. “Now, with Pivet, we’re building the critical operational structures. This partnership will enable our expansion.”