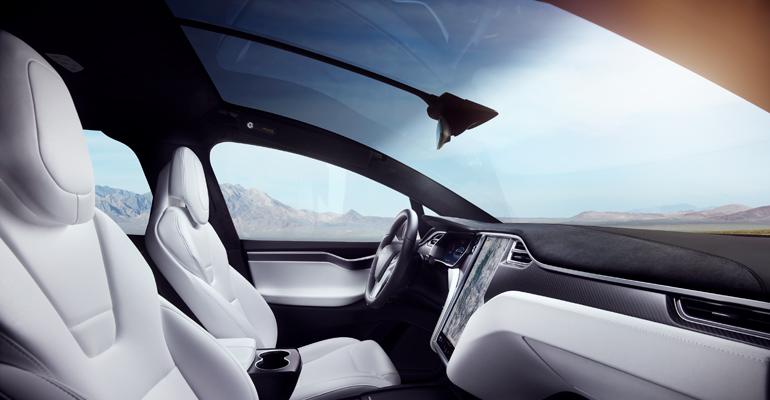 A key visual impact comes from just how big the windshield is.
Industry News

How I Drank the Tesla Kool-Aid and Became a Believer

Tesla soon will face formidable competition from German juggernauts. Technically they will be able to match everything Tesla has done. But will they be able to capture the fun, whimsical and sassy attitude Tesla has created?

Anyone who follows Tesla from afar has every right to be skeptical of the company. It loses money on every car it sells, has mountains of debt and is burning through prodigious amounts of cash. The Model 3 may represent the most botched new-model launch in the history of the automobile. And the company’s CEO, Elon Musk, veers from sheer brilliance to sophomoric petulance.

But that’s the view from afar. If you own or lease a Tesla, it’s a different story. The driving experience is unlike anything else you’ve ever had the pleasure to drive, even very different from other electric cars. After spending some time in one it suddenly dawns on you why Tesla has developed such a cult like following.

Up to now I had never spent more than 10 minutes in a Tesla. I got a brief chance to drive a Model S some years ago and got another brief drive in a Model 3 earlier this year. But a friend of mine recently let me take his Model X home for the weekend, and for me it was an eye-opener.

As part of my job I test drive about 100 new cars a year, from entry-level economy boxes, to blisteringly fast sports cars, to the toniest of luxury sedans. Unfortunately, Tesla does not make its cars available for test drives to members of the automotive media like me. I think the company is missing out on a huge opportunity. If other automotive journalists got to experience a Tesla like I did, it would likely generate a new group of enthusiastic supporters.

Tesla does not make perfect cars. The Model X I drove had buzzes, squeaks and rattles. The fit and finish did not set any benchmarking standards. And some features are not well thought through. But in other areas Tesla is 10 years ahead of the rest of the auto industry. And it’s ahead in areas that customers love and care deeply about. That’s why they overlook some problems.

The experience starts as you approach the car. It recognizes you have the key fob, illuminates the headlamps and pops the driver’s door open. As you get closer, the door opens wider, allowing you to slip into the driver’s seat. And a tap on the brake pedal closes the door. At this point your favorite music already is playing and the HVAC is setting the climate to your preferred temperature.

You don’t start up a Tesla. There’s no button to push. You just get in and go. And you don’t turn it off. You just put it in Park, walk away, and it turns itself off.

Stepping into the Model X is like strolling into a giant theater. It just seems so spacious, wide and open. Then your attention pivots and is drawn to the giant 17-in. (43-cm) display screen mounted on the center console. Tesla introduced that screen on the Model S in 2012, and even though everyone has been oohing and aahing over it ever since, no other automaker has come anywhere close to matching it.

The screen is so big it’s easy to operate, much easier than all the other screens out there. It’s the digital equivalent of big, fat knobs and switches. That helps keep your eyes on the road instead of staring at the screen, trying to steady your hand and hunt for an icon. This ease-of-use removes a layer of distraction for the driver, which makes the driving chore safer and more pleasant.

The next visual impact comes from just how big the windshield is. It carries well into the roof, all the way to the B-pillar. And that creates a panoramic view unlike any other car. It’s like watching a high-resolution version of the outside world roll by through a giant IMAX screen.

The 3-row, 7-passenger Model X is a big vehicle. Tall, wide and long. While it’s been described as an SUV, it feels and drives more like a minivan. But with a low center of gravity thanks to its floor-mounted battery pack, it handles far better than any minivan, with almost no body roll going through fast corners. Push it hard enough, however, and the front end plows like an old farm tractor.

You’ll be eager to push this car hard. My friend’s Model X is the P100 D edition with the big battery pack, and no doubt most of you know what that gives you: Ludicrous mode. Selecting that mode transforms this 5,500-lb. (2,495-kg) behemoth into an exotic supercar. It does 0-60 mph (97 km/h) in about 2.6 seconds. The quarter-mile falls in about 11.3 seconds. This kind of acceleration doesn’t just push you back into the seat, it pushes all the blood to the back of your head. As my friend says, “If you see an opening in traffic, you just teleport yourself there.”

I was pleasantly surprised to find a Tesla Supercharger station not far from my house. I live in Michigan which (stupidly) has banned Tesla from selling any cars in the state. Yet, there was a steady parade of Teslas coming and going at the station, so the ban is not stopping people who really want one. And it’s a friendly crowd. Tesla owners wave at each other as they pull in to charge up, and we struck up a conversation with an owner while waiting for the battery to top up. Besides the camaraderie, it’s a great feeling to “fill up” for free. Tesla doesn’t charge Model S and X owners to use its Superchargers.

Tesla’s engineers also have a sense of humor. The volume of the sound system can be cranked up to 11, a reference that all you fans of the mockumentary “Spinal Tap” will appreciate. Ludicrous mode, of course, is a reference plucked from the wacky movie “Spaceballs.”

As you choose Ludicrous mode, a message on the center screen warns you that it can result in more wear and tear on the powertrain. Then it offers you two selections. You can cancel out by choosing a message that reads “No, I want my mommy.” Or you can accept it by choosing the message, “Yes, bring it on.”

What other car company incorporates pop-culture references into its cars? None, of course. But it’s details like these that make Tesla owners so loyal.

Tesla soon will face formidable competition from the German juggernauts, Mercedes, Porsche, BMW and Audi. Technically they will be able to match everything Tesla has done. But will they be able to capture the fun, whimsical and sassy attitude that Tesla has created? Time will tell, but I don’t think it’s in their DNA.