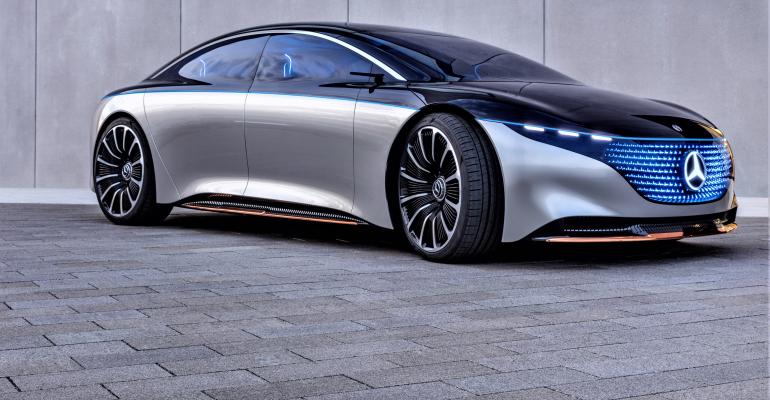 To be sold alongside internal-combustion-engine-powered versions of the upcoming seventh-generation S-Class models from 2021 onwards, the production version of the EQ S will act as a high-tech figurehead for Mercedes-Benz’s newly created EQ electric-vehicle sub-brand.

Called Vision EQ S, the 4-door provides a foretaste of what Mercedes-Benz claims will be its most advanced production model yet when it reaches North American showrooms as an upmarket rival to the all-electric successor model to the Jaguar XJ and the Tesla Model S.

To be sold alongside internal-combustion-engine-powered versions of the upcoming seventh-generation S-Class models from 2021 onwards, the production version of the EQ S will act as a high-tech figurehead for Mercedes-Benz’s newly created EQ electric-vehicle sub-brand.

It will follow the new EQC, EQ A and EQ B as Mercedes-Benz’s fourth electric model, albeit the first to feature a dedicated platform. The EQ S also forms the basis of an even more luxurious electric-powered Maybach model designed to take on an upcoming electric model being developed by Rolls-Royce.

“By 2022 we will have launched a total of more than 10 purely electrically driven vehicles,” Mercedes-Benz Chairman Ola Kallenius says. “Over and above this, we shall electrify the entire Mercedes-Benz portfolio and thus offer our customers at least one electrified alternative in every Mercedes-Benz model series, over 50 in all.”

Powered by one electric motor on the front axle and another on the rear axle to provide it with all-wheel-drive capability depending on the driving mode and a combined output of about 469 hp and 560 lb.-ft. (759 Nm) of torque, the Vision EQ S promises 0-62 mph (100 km/h) acceleration in an S560 4Matic-beating 4.5 seconds and a top speed beyond 124 mph (200 km/h). Mercedes-Benz suggests the production version of the new luxury sedan will mirror these figures.

Mercedes-Benz says the two electric motors can send power to each wheel, both front and rear, via a torque-vectoring process claimed to provide unparalleled levels of traction and handling prowess in the upper-luxury segment.

Central to Mercedes-Benz’s new range-topping EQ sub-brand model is a newly developed platform described as being scalable in both the wheelbase and width as suitable for a wide range of vehicle types. Conceived exclusively for EVs, the high-strength steel, aluminum and carbon fiber structure is designed to accommodate battery modules of up to 100-kWh capacity, as previewed by the EQ S Vision.

The lithium-ion battery from Mercedes-Benz’s sister company Accumotive is claimed to provide the zero-emission sedan with a range of over 435 miles (700 km) – some 158 miles (254 km) more than Mercedes-Benz’s first volume-production EV, the recently introduced EQ C.

As previewed by the Vision EQ S, Mercedes-Benz says it has developed the EQ S to support 350-kW charging, a standard first achieved by Porsche with its new Taycan. On such a system, the German automaker claims the battery can be charged to 80% of its capacity in just 20 minutes.

By adopting a dedicated EV platform, Mercedes-Benz provides its latest concept with different proportions than its more traditional sedan models. The hood is shorter with the windshield set well forward while the rear end is quite low by modern-day standards. The roofline is similar to that gracing the automaker’s third-generation CLS.

With the battery housed completely within the floorpan of its new MEA platform, the new sedan is said to boast an exceptionally low center of gravity in a move that, in combination with an advanced air suspension featuring active body control and anti-lean, is expected to give the production version of the new concept outstanding dynamic qualities by luxury-car standards.

Stylistically, the Vision EQ S follows the lead of the EQ C with an exterior featuring fuller forms and smoother surfacing than its current ICE models in what Mercedes-Benz describes as “one bow” design lineage. To add visual flair, the new concept receives a 2-tone paint scheme as well as an LED light band along the shoulder of each side – an effect that helps enhance its length.

In place of a traditional chrome grille, the EQ S receives a seamless black panel grille similar to that first seen on the Vision EQC in 2016, complete with an illuminated three-pointed star emblem.

Conceived to provide the new sedan with the sort of visual qualities Mercedes-Benz expects to incorporate on the exterior of future models, it supports over 188 individual LEDs creating a unique light signature with three-dimensional qualities. 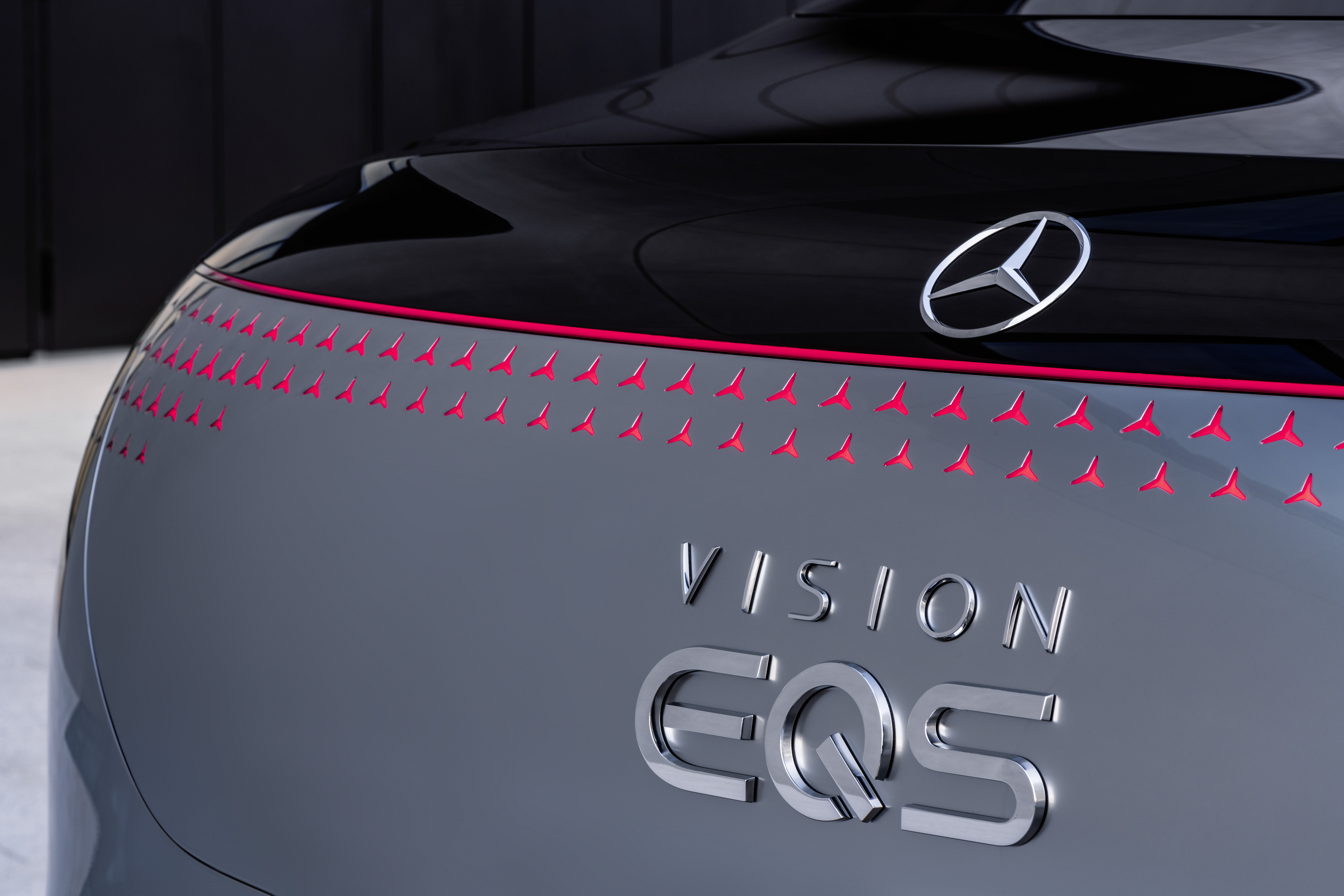 Bookmarking the black panel grille are Mercedes-Benz’s Digital Light headlamps, each featuring two holographic lens modules allowing it to project signals onto the road as part of efforts to improve safety for pedestrians.

A light band made up of 229 individual illuminated three-pointed stars dominates the rear end (left).

All up, the new concept is claimed to feature some 940 individual LEDs.

Inside, the EQ S features a newly styled cabin that Mercedes-Benz says was inspired by luxury yachts. The flowing forms of the dashboard are said to mirror the look already chosen for the production version of the luxury sedan. Also on board is a future iteration of Mercedes-Benz’s latest MBUX operating system, which works in combination with a large digital panel housing the instruments and infotainment functions.

As well as revealing the design ideas to be incorporated in its production sibling, the interior showcases a number of recyclable materials being considered for use in future Mercedes-Benz models. Included are composite materials from recycled PET bottles and plastic ocean waste as well as a fake leather material that is claimed to closely resemble the properties of Nappa leather.