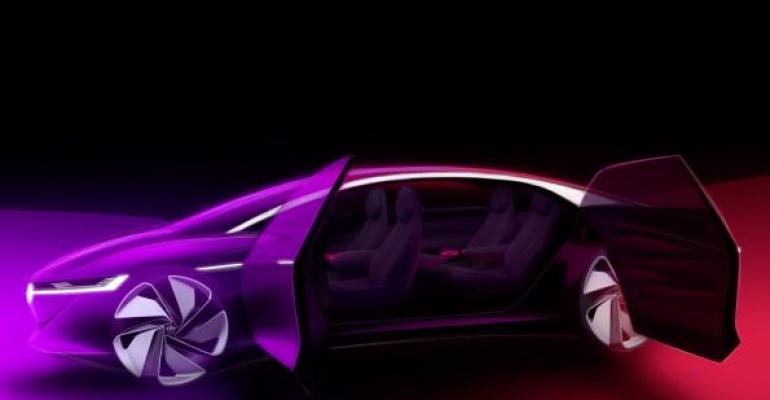 Volkswagen will reveal the fourth member in its I.D. electric-vehicle lineup at the Geneva auto show in early March.

Called the I.D. Vizzion, the new 4-door presages a Tesla Model S-rivaling flagship sedan planned to go into production in 2022 as an indirect successor to the discontinued Phaeton at Volkswagen’s Dresden plant in Germany.

The Vizzion has been conceived to complement upcoming production versions of the I.D. hatchback, I.D. Buzz MPV and I.D. Crozz CUV in an extended lineup of all-electric models planned by the German automaker as it attempts to put the Dieselgate emissions-manipulation scandal behind it.

Volkswagen hints the Vizzion will have hands-off Level 5 autonomous capability when the production version arrives in showrooms four years from now.

Teaser sketches issued by Volkswagen reveal the wind-cheating appearance of the latest I.D. concept, which claims a limousine-like 201.2 ins. (5,110 mm) in length.

In profile, the styling of the Vizzion’s nose section shares certain similarities to the earlier Volkswagen XL1 as well as the Gen-E research vehicle developed as part of a future technology program. There also are hints of the I.D. Crozz in the curvature of its roof and the sweeping line of its rear pillars.

Entry to the cabin is via coach-style doors. The lack of a B-pillar provides a large aperture.

Inside are four individual seats and a center console that extends back through the cabin.

The latest VW concept eschews a traditional dashboard, pedals and steering wheel in a move aimed at highlighting its autonomous-driving technology.

Volkswagen already has confirmed the production version of the I.D. hatchback will enter production in late 2019, while the I.D. Crozz will launch in 2020 and the I.D. Buzz is slated for 2021.