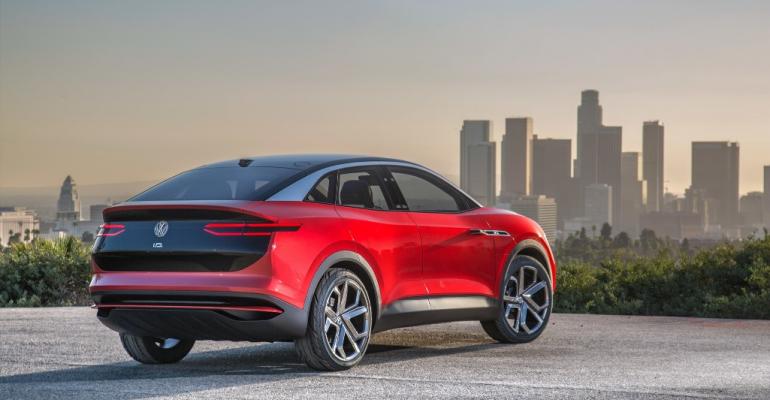 <p><strong>Production version of I.D. Crozz concept EV due in U.S. in 2020. (Concept in photo.)</strong></p>
Vehicles>Powertrain

While the shift in focus to electrics initially may have been motivated by VW&rsquo;s Dieselgate emissions scandal, it appears the strategy now goes well beyond plugging holes in the automaker&rsquo;s lineup, to changing the very way its vehicles are bought and sold.

LOS ANGELES – Volkswagen of America furthered its commitment to electric vehicles, announcing here on the outskirts of the Los Angeles auto show it will sell a new all-electric CUV model nationwide in the U.S. in 2020.

And while the shift in focus to electrics and away from diesels initially may have been motivated by VW’s Dieselgate emissions scandal, it appears the strategy now goes well beyond plugging holes in the automaker’s lineup, to changing the very way its vehicles are bought and sold.

VW says the CUV, which will be based on its new MEB dedicated EV platform and derived from the I.D. Crozz concept first shown in Shanghai in April, will be the size of a Tiguan, have the interior space of the bigger Atlas and be priced on par with a conventionally powered Atlas (not including any tax or other government incentive), which starts at about $31,000.

VW is spending €6 billion ($7 billion) on developing its new MEB platform and a number of new models that will serve multiple brands in the VW Group.

The VW marque alone expects to have 15 MEB models in its lineup by 2025. The first, due in 2019, will be the I.D. hatchback, which is similar in size and style to BMW’s i3 and will be offered in Europe and China.

VW says the vehicles will be rear-wheel drive, but offer all-wheel drive as an option. The automaker decided against front-drive for the platform because it couldn’t get enough weight over the front axle to ensure adequate traction under all driving conditions.

Complete details on the MEB batteries are not being disclosed, but the concept features an 83-kWh lithium-ion pack that powers two electric motors – one on each axle with combined output of 302 hp. That battery would be good for a 300-mile (483-km) range and would represent an upgrade option on the production model, which will get a battery good for a 200-mile-plus (322-km) range.

Recharging times can be as little as 30 minutes for an 80% fill via a 150-kWh DC fast charger.

But the MEB game plan covers more than just the platform’s powertrain, as executives here detail changes in how the vehicles are sold and how owners interact with them.

On the sales side, VW will simplify product choices so buyers are able to configure their MEB vehicles online in five computer clicks, similar to the way a smartphone is purchased: One to select the model, one to pick the power option (battery range), a third to select the color, a fourth to choose from among a handful of option packages (no stand-alone options will be available) and a fifth to purchase any software and service packages available.

The automaker also is experimenting with mall-type stores where shoppers can browse products, take test drives and spec out models with advisors before being turned over to a dealer to complete the sale. One such store in the U.K. drew 30,000 visitors the first month, conducted 350 test drives and led to 10 sales, the automaker says.

VW says software available on the EVs will be updatable, and buyers will be able to download available packages at any time during ownership.

“We’re trying to disrupt ourselves as much as possible,” Juergen Stackman, in charge of VW brand sales and marketing, says of how VW is attempting to change company culture and how it interacts with its customer base post-Dieselgate.

VWA President and CEO Hinrich Woebcken says VW wants to be the EV leader in the U.S., predicting battery-electric vehicles will account for 10% of industry sales in the U.S. by 2025.

“This is a big statement of bringing electric mobility to a larger number of consumers,” he says of the upcoming I.D. Crozz and future MEB derivatives. “With this, we believe we have a chance to be the highest-growing brand in this country.”