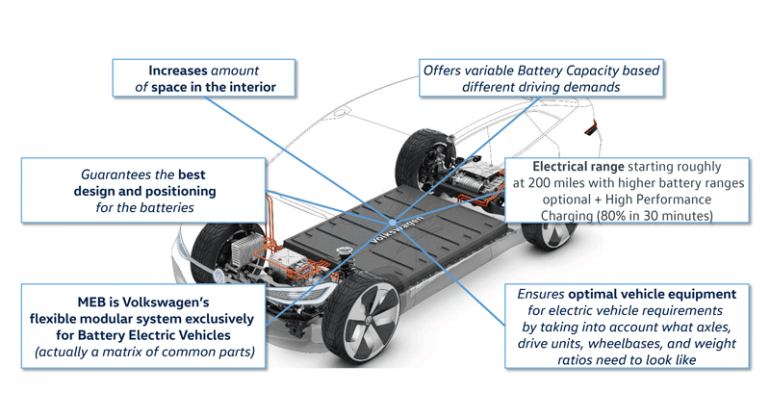 The new architecture will consolidate electronic controls and reduce the number of microprocessors, advance the application of new driver-assistance technology and somewhat alter the way cars are built at the German automaker.

Volkswagen’s new MEB architecture not only will result in a broad lineup of new battery-electric vehicles, it will usher in unique production methods and pave the way for broader application of advanced technology at the automaker’s core brand, officials say.

VW’s EV plan is a sweeping one, with 50 BEVs and 30 plug-in hybrid-electric vehicles slated to roll out from the group’s 12 brands between 2019 and 2025. Designed to ensure the strategy’s success, the automaker this week announced the appointment of company veteran Thomas Ulrich to head a new e-mobility division.

The aggressive product plan includes a healthy slate of MEB-based vehicles for the Volkswagen marque, which is banking on BEVs as part of its post-Dieselgate image-rebuilding campaign. The first VW-badged MEB model, the A-segment-sized I.D. hatchback, will debut in Europe next year, followed by the ID Crozz, a small CUV that also will be sold in the U.S. beginning in 2020.

Coming after that is a battery-electric sedan (likely around 2021), followed by a CUV one size bigger than the Crozz. The I.D. Buzz, a modern interpretation of the VW Bus, is due in 2022, followed by additional derivatives and yet another MPV/CUV prior to 2025. Commercial vehicles based on the MEB platform also are in the cards.

VW predicts industry BEV sales to account for about 10% of the global market in 2025, with VW outpacing that share slightly. BEVs will control a much larger 35% of the global premium segment by then, the automaker says.

“It’s easier to sell it in the premium segment,” Matthias Erb, executive vice president and chief engineering officer for the North American region, notes in a briefing revealing some of the first technical details around the MEB platform. “(But) our group is very, very convinced that electrification is going to happen, and coming out of our (Dieselgate) crisis, I think we’ve got a little more motivation than many other companies.”

Pricing will be among the keys to market growth, and VW is promising to position its MEB vehicles competitively based on each model’s interior volume. Because the MEB’s purpose-built design doesn’t have to accommodate an engine and transmission, it allows for a flat floor and a roomier-than-normal cabin. The upcoming I.D. Crozz CUV, for example, has a Tiguan footprint but the interior package of the bigger Atlas model. VW says it will be priced similarly to an Atlas – before any government incentives such as the current $7,500 U.S. EV tax credit are factored in.

The MEB architecture is designed to cover the full market spectrum for the VW brand.

“All our traditional Volkswagen cars will fit on (the) platform,” Erb says, acknowledging that Audi and Porsche will need an additional BEV architecture for larger models. “(The MEB) is not a platform to go from zero to 100.”

Going with a dedicated architecture enables the MEB to be rear-wheel drive (all-wheel drive will be an option). That makes for better weight distribution that should lead to improved driving dynamics, executives say, pointing to the current MQB-based front-drive e-Golf, which can lose traction under certain driving conditions due to the extra weight of the battery pack over the rear axle.

Although there are plans to produce MEB-based sedans, Erb admits to a bit of a styling hurdle with that body type due to the platform’s higher ride height required to accommodate the battery pack.

“It’s no challenge to create an SUV,” he says. “The real challenge is to keep the sedans beautiful. We’ll have a challenge to make (MEB models) look like sedans.”

Although factories won’t be radically different, the MEB is a rolling-chassis configuration and production methods will be somewhat unique from those used for VW’s MQB-based vehicles.

That means dedicated production lines make the most sense, Erb suggests. VW will start by converting its Zwickau, Germany, plant, now home to Golf production, to 100% MEB output. Plans for production in China also have been confirmed – VW wants to build 1.5 million new-energy vehicles, mostly BEVs, annually in China by 2025. U.S. output is eyed as well, though no firm commitment has been made.

Having stand-alone plants, rather than mixing MEB models into production at ICE-vehicle plants, makes the BEV program a bigger risk for VW, but Erb says the benefits to product design from having a dedicated electric-vehicle platform are worth the gamble and outweigh the cost of any manufacturing inefficiency.

“We (are) more convinced than ever that volume-wise you can build real (full-scale) factories for electric vehicles,” says Erb, alluding to the automaker’s bullish market projections.

MEB will be the first VW-brand platform to switch to a more streamlined data-processing strategy. It uses a centralized domain controller Erb says will reduce the number of microcontrollers to a handful from an average 60-80 today and permit over-the-air software updates. Although similar in concept to what Audi already is doing, components won’t be identical.

“The (electric/electronics) platform will be a different one for Volkswagen, because it also will apply for our MQB,” he says. “It’s going to be a huge step, by the way.”

MEB also will be a prime conduit of VW’s advanced driver-assistance systems, including traffic-jam assist and, ultimately, full autonomous technology. The automaker says the BEV platform will be prepped for a full array of lidar, radar, ultrasonic and vision sensors to provide a 360-degree view of the area surrounding the vehicle.

“It’s a gradual process,” Hinrich Woebcken, CEO of Volkswagen North American Region & Volkswagen Group of America, says of the automaker’s plans to roll out ADAS technology via the new EV platform. “You can be assured all of the (advanced) technology will be prepared for (MEB). We have in the backbone (of the platform) the technology (needed) for higher levels of autonomous driving.”

For instance, MEB is expected to be the basis for a production version of VW’s Sedric concept car, an electric, autonomous, ride-sharing fleet vehicle ultimately expected to be produced for the automaker’s MOIA mobility arm.

At CES 2018 this week, VW announced it is partnering with NVIDIA on an “Intelligent Co-Pilot” system for the I.D. Buzz that will incorporate artificial intelligence to provide driver alerts when a bicycle is in the vehicle’s path and gaze tracking for driver-distraction alerts, as well as gesture-control and facial-recognition features.

As for the MEB’s battery strategy, VW will offer a standard pack that will top 200 miles (322 km) of range in the U.S. driving cycle and at least one upgrade extending that to about 300 miles (483 km). Charging time is as little as 30 minutes for 80% of the maximum range, the automaker says.

The battery pack’s lithium-ion cells will be prismatic, at least initially, meaning Panasonic Energy is the likely supplier. Panasonic, the only major EV battery maker producing prismatics, already provides cells to Audi, Porsche and Tesla and also is Tesla’s partner in a new battery plant in Nevada, which presumably would be a candidate to supply any U.S. MEB production.

However, Erb says the liquid-cooled packs could accommodate pouch-type cells, and that VW will have to be prepared to adjust sourcing depending on supply-chain issues.

“You have to be flexible,” he says. “But if you localize the product…you are going to change parts. You have to. This also would apply to the (battery) cells, as far as we see at the moment.

“And we’re already planning for the next-generation of batteries,” he adds. “Sooner or later we could switch to solid-state batteries – this is what the market expects and what we’re already working on.”

VW’s electrification plan doesn’t end with MEB. Erb promises there will be hybrid versions of all the automaker’s models eventually.

“This is a clear target that each of the (12 Volkswagen Group) brands will have,” he says. “There will be many more hybrids, of course.”