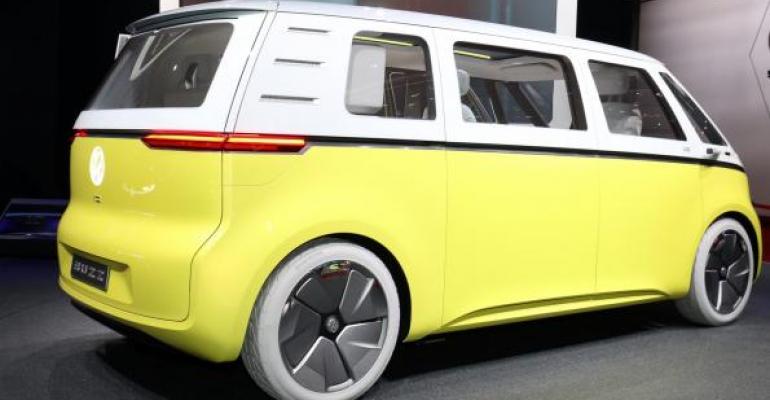 <p><strong>Matthias Muller says the &ldquo;Roadmap E&rdquo; plan calls for Volkswagen to build up to 3 million electric vehicles annually by 2025 and market 80 new electric models across Volkswagen Group by then.</strong></p>

Volkswagen is promising to set up 16 battery-electric-vehicle production sites around the world by the end of 2022.

The move announced by Matthias Müller, CEO of Volkswagen AG, at its annual media conference in Berlin underlines the automaker’s commitment to electric-vehicle production. Currently it produces EVs at three locations and says another nine plants are scheduled in two years’ time.

VW is advancing its plans by reaching several production partnerships with battery manufacturers for the European and Chinese markets. The contracts already awarded are worth a total of about €20 billion ($24.6 billion) and a supplier decision for North America will be made shortly.

“Things are really moving. A change of course for the Volkswagen supertanker – full speed ahead to the future!” Müller said. “Over the last few months, we have pulled out all the stops to implement ‘Roadmap E’ with the necessary speed and determination.”

Müller added that when “Roadmap E” was launched last fall, VW announced plans to build up to 3 million electric vehicles annually by 2025 and market 80 new electric models across Volkswagen Group by then. This year, another nine new vehicles, three of which will be all-electric, will be added to the group’s portfolio of eight BEVs and plug-in hybrids.

He also mentioned the number of innovations presented at the recent Geneva auto show, among them the Audi e-tron, Porsche Mission E and I.D. Vizzion, another member of the Volkswagen I.D. family. From 2019, there will be a new EV “virtually every month,” Müller said.

“This is how we intend to offer the largest fleet of electric vehicles in the world, across all brands and regions, in just a few years,” he added.

While Müller admitted the Dieselgate scandal cost the automaker “billions,” he stressed that diesel-powered vehicles remain a vital part of VW’s near- to mid-term production plans, especially in terms of combating climate change.

“We are making massive investments in the mobility of tomorrow, but without neglecting current technologies and vehicles that will continue to play an important role for decades to come,” he said. “We are putting almost €20 billion into our conventional vehicle and (drivetrain) portfolio in 2018, with a total of more than €90 billion ($111 billion) scheduled over the next five years.”