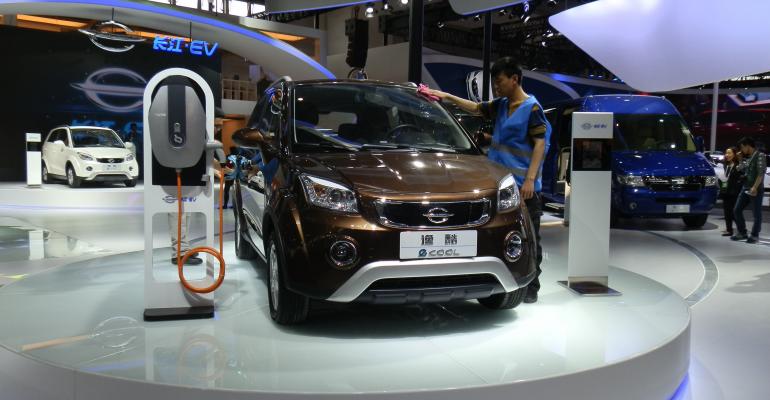 As government incentives encourage all types of companies to try their hand at producing battery-electric and plug-in hybrid-electric vehicles, suppliers are being swamped with requests to work with clients whose long-term prospects are unknown. &nbsp;

BEIJING – China aims to be the world leader in electric-vehicle production and sales, and government incentives are encouraging all types of companies to try their hand at producing new-energy vehicles, as battery-electric and plug-in hybrid-electric models are known here.

That has created a problem for suppliers in China, who are being bombarded with requests to work with companies whose long-term prospects are unknown.

“If we added up all the volume these new companies are talking about (producing), by 2020 there would be 3 (million) to 5 million units coming out at the same time in the same market,” Frank O’Brien, Magna International executive vice president-Asia Pacific Region, tells

Wards Auto. “That has risk for us.”

Trying to figure out which of the companies will survive eats up valuable time. “The potential to distract people from their current work in the organization is important,” O’Brien says.

Last year, Magna was approached by 17 companies looking to use the supplier’s engineering expertise and components. Some were actual automakers, others weren’t even in a commercial business.

For example, six Chinese men came to talk with Magna in China about vehicle development there, O’Brien says. One had a business card from a shady trading company; the others were from a provincial government whose name they wouldn’t reveal. They planned to build a city of 300,000 people around a plant producing 3 million EVs annually, with production launching by 2018.

Another Chinese group visited Magna in Michigan, aiming first to set up operations there and adopt best manufacturing practices. They figured producing and selling EVs in the U.S. would be easy because there would be fewer homologation issues, O’Brien says.

“Those guys came once and never came back,” he says.

But a portion of those sales later were declared fraudulent – a desperate attempt by various players in the last few months of the year to grab a share of government incentive money.

Even legitimate EV sales are not evidence of a boom in demand for the vehicles in the world's No.1 automotive market, says Janet Lewis, head of industrials research with Macquarie Group in Hong Kong.

Cities such as Shanghai, Beijing and Shenzhen, which have policies restricting registration or limiting driving days for non-EV drivers, account for much of the demand for the vehicles, she says.

“If it were a real boom, you would see foreign automakers participating moreˮ in EV production and sales, she says. “They will do so reluctantly from late 2017 to 2018 because they need to lower their fleet fuel economy.”

If suppliers believe, as does NextEV, that EVs, together with the shared economy and autonomous driving, are game changers, “it is in their interests to invest in a promising EV startup,” says Dave Cai, director of business development.

“It is anyone’s guess who it is, but we are convinced that NextEV is a top candidate.”

Determining which companies are the real thing is the problem, says Matt Boyle, president and CEO of Sevcon, which manufactures motor controllers and inverters for EVs. Sevcon’s Chinese business is thriving, but it has to evaluate potential customers carefully, says Boyle.

Sevcon is getting lots of inquiries from Chinese suppliers who want it to integrate an existing drivetrain with a Sevcon inverter. A key indicator if a company is serious is whether it is willing to “put skin in the game” by paying for the redevelopment and repackaging of the power electronics, Boyle says, adding that sometimes, “You find after a few hours of talking to them it is three guys in a shed in Guangzhou.”

Others have potential, but probably not for another decade, he says.

Sevcon focuses on programs that can meet the Chinese government’s requirement that a vehicle travel at least 62 miles (100 km) only on electric power to qualify for a pure-EV subsidy, Boyle says.

China’s EV market has huge potential, he says. “The biggest problem is finding out if the guys you are doing business with are going to be around next week.”