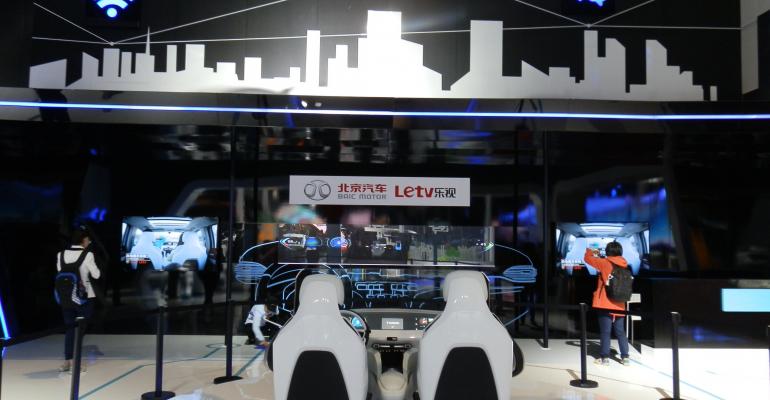 <p><strong>LeTV shows console of smart car it is working on with Beijing Auto at the Shanghai Auto Show in April, but also aims to produce its own smart car.</strong></p>
Industry News

&ldquo;We are moving away from the mechanical expertise that dominated the (Chinese) auto industry,&rdquo; says Thilo Koslowski of market researcher Gartner. &ldquo;There are no boundaries in the way the technology companies are thinking about automobiles.&rdquo;

China once thought it could leapfrog the world in producing electric vehicles. After all, it supplies most of the world’s lithium-ion batteries. That turned out to be harder than anticipated.

There is another area China leads in, however: number of Internet users. It also is the world’s largest vehicle market. The somewhat vague term “connected car” combines those two fields, and Chinese companies now are looking to be global leaders in connected cars.

“At this moment Chinese companies are on a much more level playing field (with connected cars) than in the conventional auto industry,” Raymond Pei, senior intellectual-property counsel for China’s LeTV, tells WardsAuto.

LeTV is one of a handful of Chinese companies vying to create a whole new kind of connected-car experience. Their ambitions are big, but so is the opportunity.

“We are moving away from the mechanical expertise that dominated the auto industry,” says Thilo Koslowski, vice president and automotive practice leader at market researcher Gartner. “There are no boundaries in the way the technology companies are thinking about automobiles.”

The Chinese companies are part of what Koslowski describes as “a big bang moment” in the automotive industry. But he has advice for tech companies looking at building their ownconnected car: “They need to respect the complexity and regulation around an automobile.”

Leshi Internet and Information Technology, or LeTV, as the Beijing-based parent company is generally known, already has a large portfolio of connected products, including a Web-enabled TV and smartphone.

It is one of China’s largest content-streaming companies, with more than 400 million monthly users. It also has developed a connected-car operating system, LeUI.

It aims to own all the intellectual property related to the connected car, Pei says.

“I am lining up the engineers to do a mass download from their brains of all the ideas they have come up with for connected car and we are going to do patent applications” on all of it, the LeTV attorney says.

That’s a natural progression for LeTV, says Paul Gao, a partner at McKinsey & Co. in Shanghai.

“They have partially succeeded in the battle for the first-screen-in-the-house TV (and) they are still trying to get a foothold in mobile,” he tells WardsAuto. “The screen in the car would be the final battleground.”

But LeTV is going one step farther. In January it said it would produce an entire connected car that will, by the way, be an electric vehicle.

“LeTV is big on the vertical integration,” Pei says.

Pateo, based in Shanghai, has its own ideas about innovation in the connected-car space. The company already is one of China’s largest telecommunications-service providers to automakers in the country, co-founder and CEO Freeman Shen says.

But Pateo has a much broader vision. At AutoChina in Shanghai in April, the company previewed Project N, a range-extended EV concept.

“Ours is not only a smart car, it (also) is a business model,” says Shen, who comes from an automotive background. “We are trying to be involved in the driver’s usage of the vehicle in every single step.”

Pateo is working with China’s largest electric utility, the State Grid, as well as local governments and others to cover all aspects of the connected-car business, from beginning to end.

In the payment area, for example, the car will feature iris recognition to provide high security for the planned continuous connection to a credit card, Shen says.

The vehicle’s platform will come from a European OEM and Pateo will do the body-in-white design, the electronics and, of course, the human-machine interface that forms the customer experience. It will have an in-car Ethernet system and seven screens in the vehicle to enhance HMI.

Pateo touts its connected car as unique in another way: It will learn from the driver’s personal preferences, becoming a “personal driving companion,” Chris Atkeson of Carnegie Mellon University says in a video shown at the press conference in Shanghai.

Pateo is working with Atkeson, who developed a caretaker robot that was the inspiration for the movie “Big Hero 6,” to make its car more, well, human.

Says Shen, “Our car understands you.”