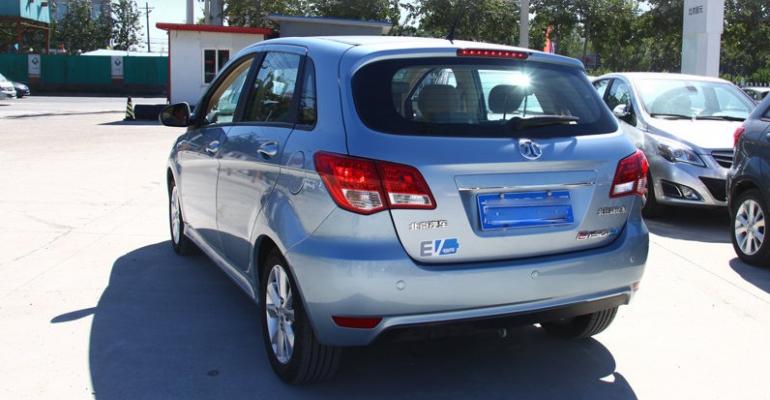 EV sales in China are growing, although they represent a microscopic portion of the world&rsquo;s biggest auto market. As there is little organic demand for the vehicles, the central and local governments have turned to a cornucopia of incentivizing policies to move the electric metal.

BEIJING – Li Jing, manager of a BAIC electric-vehicle dealership in the Beijing suburbs, is a happy man. His store sells only all-electric vehicles produced by Beijing Automotive Industry, and business is good.

“A lot of people are buying them now,” he says. “We have been selling 180 a month for the last three months.”

EV sales in China are growing, although they represent a microscopic portion of the world’s biggest auto market. As there is little organic demand for the vehicles, the central and local governments have turned to a cornucopia of incentivizing policies to move the electric metal.

Beijing Municipality is a perfect example. In June, the government began exempting EVs from rush-hour restrictions keeping vehicles off the road for one day a week. That exemption coincides closely with the sales explosion at Li’s BAIC dealership.

“The EVs are a second car for most buyers,” says Li. “They use them to get to work. You can drive an EV every day in Beijing.”

After a slow start, this year sales have taken off. In the first nine months of 2015, deliveries of plug-ins in China more than doubled to 136,733 units. BEVs accounted for 64% of those sales.

To produce this kind of growth, however, the central government and local governments have had to rely on various policies, such as the rush-hour allowance, to make EVs attractive to consumers.

Not all of those measures have been effective. Government subsidies for EV purchases have been around for years with little impact. Exempting EVs from a purchase tax also did little to excite car shoppers.

Owners of EVs for a time were exempt from Beijing’s license-plate lottery. The capital is among a handful of cities in China that attempt to control traffic by issuing a limited number of license plates each month via lottery. The wait to receive a plate can stretch to years.

Since June EV owners have had to get their license plates through a lottery as well. Their wait reportedly is much shorter, however.

“Young people have no chance to get a license,” says Zhang. “The EV lottery improves their chances to three to one.”

Sales did start to grow last year because of the incentives, Li notes. The latest move, allowing everyday driving, seems to have been a tipping point. “Sales are really accelerating now,” he says.

Even with all the favorable EV policies, Chinese consumers have another worry: charging.

“Buyers can plug in to any outlet, but everyone worries about where to charge,” says Li.

BAIC’s solution is to give away a free-standing charging station with each EV it sells. The state-owned automaker also has installed some 5,300 charging stations in cities around China to boost demand for its EVs.

Looking to California for Ideas

BAIC’s Beijing Electric Vehicle subsidiary produces four EV sedans, which vary in price according to battery range. The parent company plans to expand EV production to all its self-owned brands and add a PHEV model as well. BAIC also partners to produce traditional vehicles in China with Daimler and Hyundai.

All of China’s domestic automakers at least pay lip service to producing EVs as the central government has leaned on them to do so. But the selection of consumer EVs remains limited.  Some of China’s local governments are looking at California’s Zero Emission Vehicle (ZEV) rules as a model to help change that.

The Innovation Center for Energy and Transportation, a nonprofit with offices in Los Angeles and Beijing, is working with local officials in Beijing and the South China city of Shenzhen to implement rules similar to the ZEV program.

Under California’s ZEV rules, automakers must produce a certain number of zero-emissions vehicles for sale in California or be fined. Automakers earn credits for each ZEV vehicle produced, and if an automaker doesn’t earn enough ZEV credits, they can be bought from other automakers who have excessive credits, such as Tesla. Because of those ZEV credit purchases, it’s likely no automakers ever have been fined outright in California.

The ZEV program has resulted in a larger selection of EVs in California than in any other state. California also accounts for a huge majority of all EV sales in the U.S. Although that is mostly because of subsidies and High-Occupancy Vehicle lane access, the larger selection does help boost sales. Chinese cities are hoping California’s rules will have a similar impact for them.

An Feng, iCET founder and president, says China’s government wants domestic automakers to “get serious” about producing EVs, and a ZEV program could do that. The caveat, he says, is enforcement.

“California has worked because it has a very high penalty,” says An. “In China, who has the authority to introduce the penalty and manage it?”

In any case, demand for EVs in China won’t really take off until foreign automakers introduce high-quality models, he concludes. BAIC dealership manager Li might look at his showroom traffic and beg to differ.