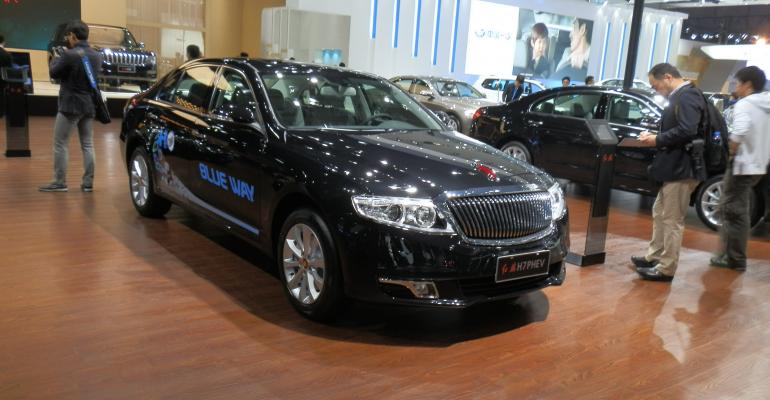 Regardless of consumer demand, and despite the possibility of incentives ending by 2020, automakers in China will have to keep churning out PHEVs and EVs to meet future fuel-efficiency standards.

At AutoChina in Shanghai in April, General Motors announced it would add a plug-in hybrid-electric version of the Cadillac CT6 sedan to its lineup. Besides allowing GM to show off a luxury vehicle in a crucial market, the announcement helped the automaker demonstrate it was listening to the Chinese government regarding electric vehicles.

It was no surprise that it chose to announce a PHEV rather than pure electric drivetrain, however.

“This is a realistic solution,” says Yale Zhang, managing director of consultancy Auto Foresight in Shanghai. “You don’t need to worry too much about your driving-range issue.”

China has ambitious targets for sales of EVs and PHEVs over the next decade. Automakers face pressure from Beijing to produce both types of vehicles. But PHEVs are the only type of EV Chinese consumers are buying these days, so automakers are going after that segment first.

Audi unveiled two new production-version PHEVs in Shanghai, as well as a concept PHEV. Among domestic automakers, BYD, which used to tout its all-electric drivetrain, unveiled two new PHEV SUVs. Even the iconic Red Flag sedan, produced by First Auto Works and the favored sedan of army elite since foreign-brand purchases were banned, included a PHEV version at its stand.

Though its customers include both car and commercial-vehicle makers, cars account for the majority of its customers, he adds.

The plug-in electric vehicle market in China would seem to be booming. In the first four months of 2015, sales of passenger PHEVs more than doubled to 10,865 units and all-electric sales rose 90% to 12,783, according to Auto Foresight.

But the PHEV buyers were mainly in two cities, Shanghai and Beijing. “Retail adoption remains limited outside of cities with license-plates restrictions and policies specifically favoring EVs,” says Robin Zhu, an analyst with Sanford C. Bernstein in Hong Kong.

BEV sales were more evenly distributed, says Auto Foresight’s Zhang, “but most of the customers are fleet customers such as taxis.”

Consumers won’t buy EVs until charging stations are installed in neighborhoods where people actually live so they can charge overnight, he says. Thus far, charging stations in Shanghai are concentrated in a few pilot areas in the suburbs.

But Zhang says there are hurdles to neighborhood installation, such as complaints about someone taking up one parking space all the time, or possible fires.

“If there is some trouble, who is responsible?” he says. “If I am the property manager, I don’t want to do this.”

While it hasn’t yet come out with those kinds of policies, China’s Ministry of Industry and Information Technology (MIIT) in late May announced its latest New Energy Vehicle goals (New Energy Vehicles include PHEVs, EVs and hydrogen-fuel-cell vehicles.).

They include annual sales of 1 million PHEVs and EVs by 2020, rising to 3 million by 2025. This does not include low-speed electric vehicles, which China already produces in volume. LSEVs are considered too low-tech for Beijing, which aims to boost not only the number but also the local technology content of its electric vehicles.

“I don't think the government has a very good attitude towards LSEVs,” Chen Quanshi, director-Tsinghua University’s Automotive Research Institute says at the CBU/CCPIT conference in Shanghai in April.

Regardless of consumer demand, and despite the possibility of incentives ending by 2020, automakers in China will have to keep churning out PHEVs and EVs to meet future fuel-efficiency standards.

It will be a challenge impossible to meet without the inclusion of electric vehicles.