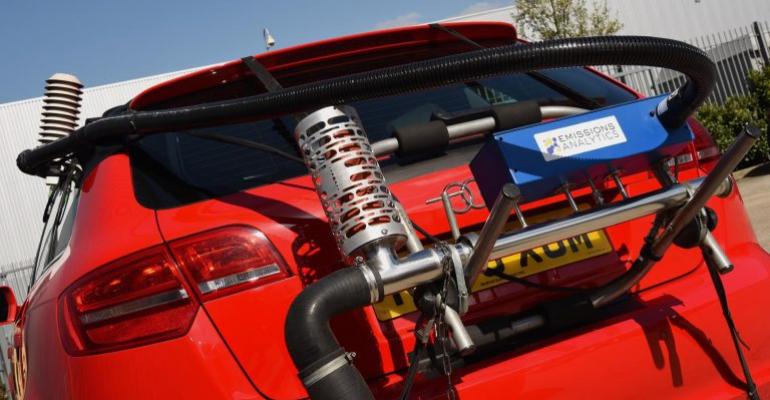 The U.K.&rsquo;s Emissions Analytics testing firm shows in some vehicles, the level of noxious air being breathed in the cabin can be up to 10 times higher than air-pollution figures recorded on the sidewalk as polluted air is driven toward car occupants by the vehicles&rsquo; ventilation systems.

Research by the U.K.’s Emissions Analytics air-quality and fuel-economy monitoring specialist shows in some vehicles, the level of noxious air being breathed in the cabin can be up to 10 times higher than air-pollution figures recorded on the sidewalk with polluted air being driven toward car occupants by the vehicles’ ventilation systems.

The company, based in Winchester some 65 miles (105 km) southwest of London, has developed a robust and dependable portable emissions-measurement systems device to measure a car’s fuel economy and emissions on public highways.

Its latest research into cabin pollution is at a fledgling stage and, so far, only six new vehicles have been tested. However, those tests reveal a huge gulf between the air quality of expensive and inexpensive cars.

One upmarket sedan recorded a figure of 75 particles per cubic centimeter compared with 19,631 found driving in a low-cost car.

In a report recently aired on British television, the company also says its tests have found some new vehicles that meet the latest Euro 6 emissions standards are more polluting than the best of the older Euro 5-compliant cars. This implies some automakers may be dumping dirty cars on the market before the mandate for all vehicles in London and Paris to be tested in highway conditions takes effect by year’s end. Both cities will use on-road emissions data collected by Emissions Analytics.

“It looks like there is a concerted effort to get out cars which will struggle to comply under the new regulations just before the new regulations bite,” Nick Molden, Emissions Analytics founder and CEO, tells the news show: “We can’t prove this for certain but we have a very strong upward trend from about five times the limit to about seven times the limit of the very latest ones we’ve tested.”