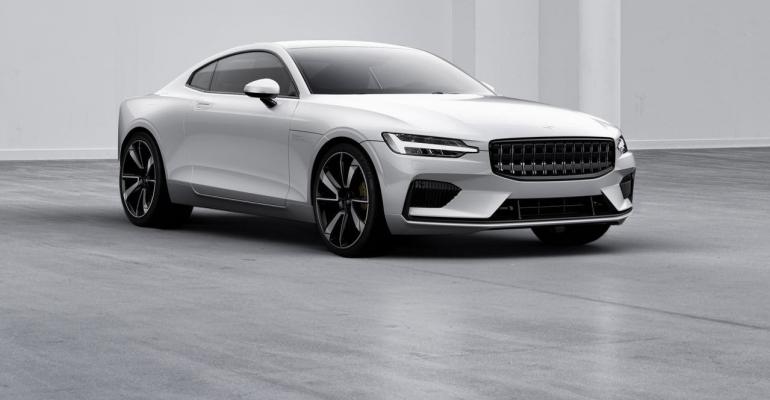 Once Targeting AMG and M, Polestar Now Sets Sights on Tesla and Porsche

The Polestar CEO hopes to see an end to the acceleration wars, saying, “As soon as you’re beyond the 4.0-second (mark) and zero to 100, all that feels just flipping fast anyway and you’re not able to detect the difference anymore.”

But now, with a path toward electrification firmly in place, it sees itself going head-to-head with a different crowd. Polestar CEO Thomas Ingenlath calls Tesla and the increasingly electrified Porsche “our competitive set.

“Our conviction is 100% that the future of (the) automotive industry is electrification,” Ingenlath says in an interview with select media here.

He defines Polestar, a company founded in 1996 to race Volvos solely with internal-combustion engines, as a brand producing premium performance vehicles but one concentrating “on full-on electrification.”

Polestar a year ago laid out a plan to offer electrified, high-performance models under its own brand and last month announced Polestar Engineered, a trim level on select electrified Volvo models offering their highest-output, most athletic grade.

The first Polestar Engineered model will be a 415-hp version of the next-generation Volvo S60 T8 plug-in hybrid sedan. The car also will make 494 lb.-ft. (670 Nm) of torque.

Ingenlath says software tuning strictly is responsible for the powertrain enhancements that add 15 hp and 22 more lb.-ft. (30 more Nm) of torque to the S60 Polestar Engineered T8 plug-in hybrid over the output of the standard S60 T8 plug-in.

“It’s not working with the physical components,” he says. “I think it is a very sophisticated and very considered software tuning. It’s as well not all about the horsepower and putting the big emphasis on gaining lots of horsepower. It’s really much more on how the car responds, about how the torque development is. The car just simply feels a bit more alert and a bit more responsive.”

While the Polestar Engineered S60 puts out some impressive numbers, Ingenlath is not a fan of the specification wars, particularly those surrounding acceleration, within the auto industry.

“I think there’s nothing bad about having great torque in the car, (but) I dislike personally a lot that there’s such a silly emphasis on the 0-100 (km/h [0-60 mph]) figures and making that like a tenth of a second (faster) still makes you better than anybody else,” he says. “That is so irrelevant for a day-to-day performance experience of a car.

“As soon as you’re beyond the 4.0-second (mark) and zero to 100, all that feels just flipping fast anyway and you’re not able to detect the difference anymore,” he continues, saying the more important metric is overall performance. “How does the car handle and how does it drive around the street and the bend and how does it feel?”

Separate from Polestar Engineered, Polestar has a plan to offer electrified vehicles, either partially or fully electric, that share componentry and technology with Volvos.

“Polestar brand with our product is one thing,” Ingenlath says. “Volvo and us and us working for Volvo in terms of doing PE cars (is a separate endeavor).”

Like the new S60, the forthcoming Polestar 1 is based on Volvo’s new SPA unibody platform for midsize and large vehicles. The 2-door is a plug-in hybrid with a 336-hp 2.0L supercharged and turbocharged inline 4-cyl., two 163-kW electric motors and one 35-kW integrated starter/generator that altogether make 600 hp and 738 lb.-ft. (1,000 Nm) of torque.

When asked if there will be a less-Volvo-influenced design for the Polestar 2 all-electric midsize 4-door than the S90-look-alike Polestar 1, Ingenlath says the 2’s exterior and interior are “Polestar-unique and specific.” However, certain shared values will be present and Volvos and Polestars “will not contradict each other.

“It will show that there is a family behind it,” he says. “(We’ve made) a clear decision, that we will not do the utmost to make the opposite of what Volvo is. There (are) shared values and Scandinavian design is based on all of that.”

The plan going forward includes technology and platform sharing between the two, with the electrified powertrains Polestar uses set to filter down to the Volvo brand and Polestar also set to create its own models off Volvo’s compact CMA platform (XC40) that is soon to be electrified.

“Sharing the base technology is the foundation of our business model … and then we do our thing with it. Certainly the top power position that we will do then (will be) very much in the Polestar focus.”

That is beyond the 500 units Polestar expected to build, but with so many willing to put down a €2,500 deposit ($2,918), the performance brand now is looking to expand capacity at a new dedicated Chengdu, China, plant set to open this summer.

Still, he notes this is a limited number because the carbon-fiber-intense Polestar 1 needs to wait for “the glue to dry.”

While most Polestar-specific models are expected to be assembled in its Chengdu plant, Ingenlath says he would not mind building future CMA-based Polestars in Volvo factories to achieve economies of scale.

As for the S60 Polestar Engineered model, he expects a “couple hundred” to be assembled in the first year. The vehicle is slated to be built at Volvo’s new South Carolina plant near Charleston, which is doing pre-production builds now and targeting production builds of the S60 to begin in late August.