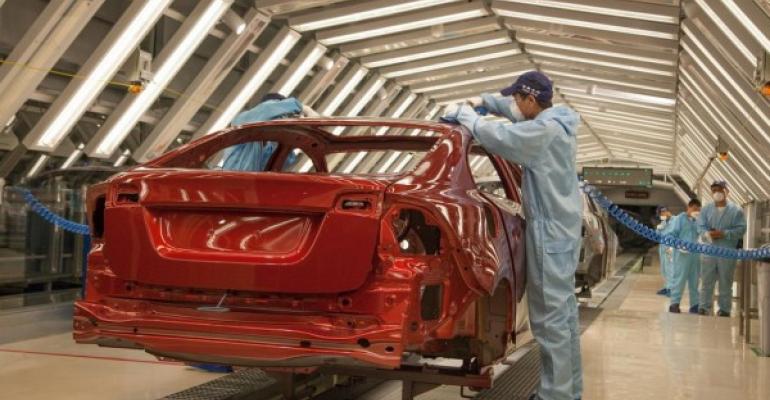 <p><strong>Volvo bullish on EVs but reliant for now on 4-cyl. ICE models such as China-built S60.</strong></p>
Vehicles>Powertrain

<p><strong>CEO Hakan Samuelsson<em><strong> </strong></em>says the push of emissions legislation will be joined by the pull of consumer demand wanting the cleanliness and convenience of electric vehicles.&nbsp;</strong></p>

GENEVA – Volvo is putting its long-term powertrain eggs firmly into the electric-vehicle basket, according to CEO Hakan Samuelsson.

Speaking at the Geneva auto show, Samuelsson is unequivocal in his support for electrification as a way of meeting Europe’s ever-lower mandated carbon-dioxide emissions levels set to fall below 95 g/km by 2020.

This level, plus the tightening of nitrogen-oxides emissions limits, poses an impossible challenge for light-vehicle diesel engines to remain a competitive consumer powertrain.

“Looking further down the line, at under 95, diesel will not be able to help us. Only electrification can,” Samuelsson tells WardsAuto.

He says Volvo will market its first EV in 2019 but doesn’t say whether it will be a compact urban car or a large premium one. “We are developing not just one model but electrification for the small platform and also for the larger platforms, and we haven’t revealed which one will be the first,” Samuelsson says.

He says the push of legislation will be joined by the pull of consumer demand wanting the cleanliness and convenience of EVs.

“Electrification is not just about lower emissions,” Samuelsson says. “It’s about having a convenient powertrain that when you drive one it’s very difficult to say that there is anything wrong with it as a powertrain.

“The driving experience with a fully electric vehicle is really very good with high acceleration (and) quiet, little or no transmission noise, so once we bring down the cost it becomes a very good proposition. People will buy it not just because of lower emissions, but because it’s good technology.”

He acknowledges small diesel engines still have a role to play in Volvo’s powertrain lineup but only for a comparatively short time, because the cost of producing diesels that can match NOx levels of gasoline engines will become prohibitive.

“After (2020) the diesel will be expensive while, at the same time, twin-engine and all-electric cars will be seen as more favorable as volumes of batteries go up and the costs come down,” Samuelsson predicts. “There is a crossover somewhere there where a twin-engine could be priced more or less equal as a diesel.”

Samuelsson also is adamant automakers should not be relied on for providing and funding EV infrastructure. “This is a sort of hen-and-egg discussion,” he says. “I think our biggest contribution to this will be our commitment. We believe in electrification and will be providing the market for somebody as a business opportunity.

“To back this up, we have to show that we are very firm in that we believe in electrification and are…not just saying ‘We are looking into electrification and (will) build some concept cars.’ We see the future is electrified and we want to be fast in that transition, and this fits with our commitment of 1 million electric cars out on the road, and that would provide the potential business for someone investing in charging infrastructure.”

At the same time, Samuelsson expresses doubts about the future of hydrogen-fuel-cell cars, a path being taken by other manufacturers such as Toyota, Honda and Hyundai.

“Of course, you should never say never, but right now it’s important for us to be clear,” he says. “The grass is always greener on the other side and there is always something new, but battery electrification is what we believe in. With hydrogen you would require all new infrastructure once more, so I think there is a limit to what people will invest in.

“We believe we have to focus on one main energy source and we believe that is electrification because it’s more flexible.

Electrification will draw on lessons Volvo has learned from employing a modular approach to production limited to 4-cyl. internal-combustion engines, Samuelsson says.

“We’re absolutely committed to this,” he says of the 4-cyl. ICE. “Two years ago, my answer would have been a bit more vague, but today we are absolutely convinced about this. The reaction to this decision has been (felt) even in the U.S.

“There are two reasons for this: No.1 is to really bring down fuel consumption, with a smaller engine having lower internal friction, and secondly, cost of production and especially around installation.

“For example, if you get an engine from a partner, which we had done with Ford, installing it into your own car can be a nightmare with all the piping and ancillaries. We had up to eight different engines at one time and all requiring different cabling, harnesses and piping and that brings with it a lot of complexity. Now we always have a 4-cyl. installed in the same way, so it’s much more modular and cost-efficient.”

The cause of the 4-cyl. will be driven forward by the new S60 due to be launched in 2018, with production plants in the U.S. and China.

“In 2018 we have a midsized sedan in the shape of the new S60 built in Charleston (SC) and then the V60 (station wagon) that will be built in Europe,” Samuelsson says. “Today S60 is built in China then shipped to U.S., so we now need two factories to handle the high volumes for this car, which will be about 30% of our total sales.”