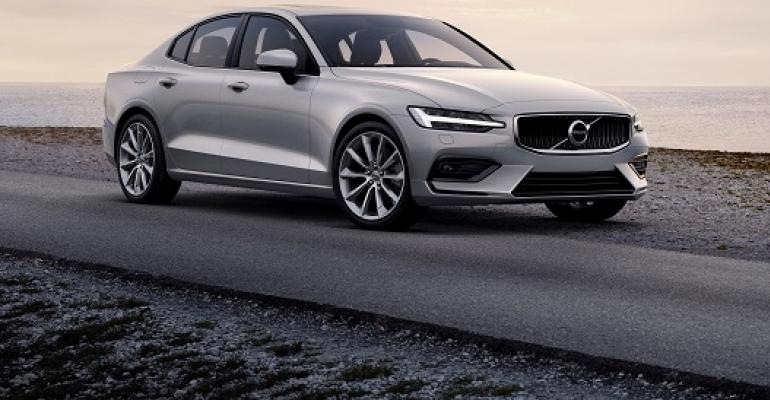 The car will offer two plug-in-hybrid powertrains, with one, the T8, having Volvo’s new Polestar Engineered performance option.

CHARLESTON, SC – Volvo reveals some details of its new S60 sedan ahead of today’s official opening of the Swedish automaker’s new U.S. assembly plant in Ridgeville near here.

The S60 is “a true driver’s car that gives us a strong position in the U.S. and China sedan markets,” Volvo Cars CEO Hakan Samuelsson says in a statement.

As the first Volvo car to be sold globally without a diesel engine option, the S60 will offer buyers a choice of the automaker’s T5 and T6 4-cyl. gasoline turbocharged 2.0L engines and – reflecting Volvo’s desire to electrify its new models from 2019 – two plug-in hybrid propulsion technologies: its T6 340-hp dual-powered all-wheel-drive system and its 400-hp T8 dual-powered AWD system.

Volvo’s new subscription service, Care by Volvo, will offer the S60. The app for Care by Volvo will be the only way to purchase the Polestar Engineered version of the car: a 415-hp T8 variant with performance handling and that will be sold in extremely limited quantities, Volvo says.

Riding on the SPA platform, as do the V90 wagon and S90 sedan and XC60 CUV, the new S60 has the same safety and infotainment technology as those vehicles, including the automaker’s pedestrian-detecting City Safety with Autobrake technology collision-avoidance system. Volvo leadership including Samuelsson, as well as local dignitaries, gathered late this morning in Ridgeville, about 40 miles (64 km) southeast of Charleston, for the official opening of Volvo’s first U.S. vehicle-assembly plant. The $1.1 billion plant, which will begin S60 production this fall and next-generation XC90 production in 2021, eventually will have an annual capacity of 150,000 units and supply both U.S. and export markets.

Volvo plans to employ roughly 4,000 workers at the plant, with an estimated 1,500 expected to be working by late this year at the facility, Volvo’s first passenger-vehicle assembly plant in North America since it closed its plant in the Canadian province of Nova Scotia in 1998, the Swedish automaker says.

Volvo has been majority-owned since 2010 by Chinese automaker Zhejiang Geely Holding Group.