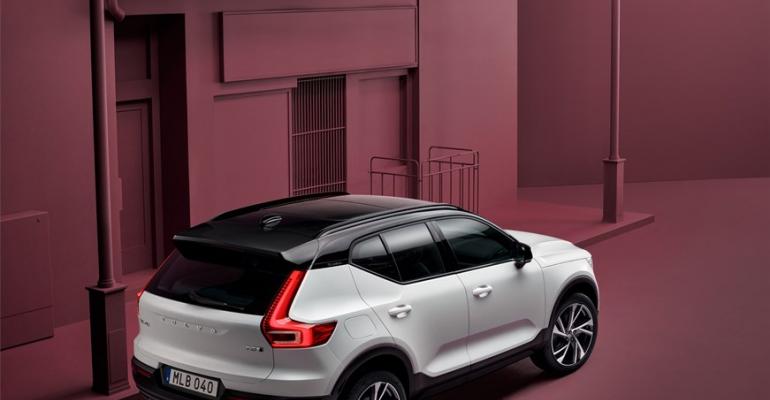 Volvo&rsquo;s engineering and R&amp;D chief talks to WardsAuto about joint development of the new CMA compact-vehicle platform and where things may be headed with electrification.

Volvo unveiled its all-new XC40 model at the Los Angeles auto show in November, moving the brand into the rapidly growing small-CUV market segment in the U.S.

And while it’s attractively styled and appears to tick all the boxes needed to blend seamlessly into the lineup alongside its XC60 and XC90 big brothers, what’s most important about the new 5-seat CUV may be what you don’t see.

The XC40 is the result of the first real in-depth collaboration between Volvo and parent Zhejiang Geely, which codeveloped the vehicle’s new Compact Modular Architecture and will derive additional models from the platform for the new Lynk & Co. brand jointly owned by Geely and Volvo. Sales of the RMB158,800 ($24,054) Lynk & Co. 01 model, based on the CMA platform, began in China last week and plans are to launch the brand in Europe in 2019 and in the U.S. in 2020.

Volvo officials are reluctant to detail how many new vehicles will be spun from the architecture for the two brands, but at minimum expect next-generation S40 sedan and V40 wagon models based on the CMA to hit the market in 2021, according to WardsAuto data. In addition, there are performance spin-offs that will come under the Polestar brand. The first Polestar plug-in hybrid will be based on the bigger Scalable Product Architecture platform and is due in 2019, but Polestar 2 will come from the CMA.

Depending on the market, the XC40 initially will be offered with a lineup of 2.0L gasoline and diesel 4-cyl. engines, but a 3-cyl. engine also will be available later. In addition, there will be multiple electrified powertrains offered, from a 48V mild hybrid to a plug-in hybrid and full electric, fulfilling a pledge by Volvo to electrify all of the vehicles it sells by 2019. The Lynk & Co. brand also plans 48V, plug-in and full-electric versions of the 01 and may only offer the battery-electric model when it comes to the U.S.

WardsAuto recently caught up with Volvo R&D/Engineering chief Henrik Green to discuss how the CMA platform program evolved, where it might be headed and the possibility of U.S. production of electric vehicles in the future. Following is an edited transcript of that discussion.

WardsAuto: How did the CMA program come together with Geely?

Green: Most of the stuff we have developed together. Geely set up an operation close to our R&D center in Gothenburg called CEVT – China Europe Vehicle Technologies. In that entity they recruited a lot of engineers, Swedish engineers, international engineers – a lot of good competence. Then in collaboration with the team I have in Gothenburg, and of course some collaboration back to their China team (that) has been growing during the development of this platform, we developed this architecture together.

WardsAuto: How did you divide that work?

Green: We put the platform responsibility on CEVT. Then we shared a lot of components that are not exposed to the consumer, a lot of the things that are underneath that you and I don’t see or touch or feel or smell. The main idea behind (sharing) those components is to scale the economy. Then everything on top of that we developed separately. So (Volvo) developed the XC40. For instance, we carried over a lot of the electrical architecture from our bigger cars. We brought in the active safety systems from our SPA platform, the infotainment system you see with the touchscreen in the center stack, the digital cluster.

WardsAuto: How much of the sourcing is from Chinese suppliers? That’s part of the savings here, right?

Green: Absolutely. I don’t have a figure to give you on that, but we set up the whole sourcing from the start to take care of the fact we have plants in Europe and in China. So every component was sourced on that global assumption that we need to look for supply both in Europe to our Ghent (Belgium) factory, where we build this car, and in China, (where) the Chengdu factory also will build this car one day. Some suppliers in China, some in Europe, but always (sharing) with both (Volvo and Lynk & Co.) vehicles.

WardsAuto: Can you shed more light on CMA electrification plans?

Green: This platform can hold a plug-in hybrid battery in the tunnel, very much similar to the SPA platform, so we can have plug-in hybrids easily with this car. We’re also developing a full-electric floor. This platform can cater to all three propulsion types, combustion (including with a 48V mild-hybrid system), plug-in hybrid and full electric type. The full battery-electric we’ve said we’re starting the rollout during ʼ19, and the plug-in hybrid we haven’t given a specific date, but it is somewhere between now and ʼ19.

WardsAuto: Do you see electrification mainly serving the Chinese market? What other markets might it be as relevant?

Green: It’s going to be a bet where it takes off. If you look at it today, it’s basically driven by three different mechanisms in the three regions. The U.S. is the region where we see most of the natural demand for EVs – that’s where you see people buying EVs. In China you have a good incentive program and there are huge sales of low-end EVs in China (that are) highly incentivized. So where in the U.S. (demand) comes from the top (with) the most expensive cars, in China it comes from the bottom, with the most (inexpensive) cars. In Europe (electrification) is driven mainly by (carbon-dioxide) fleet legislation, where currently plug-in hybrid is doing a good job. But eventually fully electric will take that role also in Europe. So I see fully electric, and including plug-in hybrids and mild hybrids, (eventually) will be driven by consumer demand in all three regions.

WardsAuto: What is the sweet spot on EV range?

Green: I think the sweet spot will change over time. As the technologies are being introduced, people are used to carrying a great deal of range when they come from a gasoline or diesel car. And we see a range anxiety in people going to electric. So in the beginning, that will be a balance between what you can afford – but you really want to have as much as possible. I would say somewhere between 200 and 300 miles (322-483 km) you have to have in the base version, and then of course the top versions can and should go above that. Over time, (as consumers get used to electrics) I think you’ll not want to carry more battery than you need. Then I could see a need for a shorter-range (battery) becoming more interesting. But that is a step the consumer is going to have to get used to first.

I’ve been in the industry now for 21 years. Doing a combustion-engine car program, you start three or four years before you launch the car and set the targets. Then you work flawlessly and you deliver what you said and you know you have a competitive product. Now, working with electric vehicles for a year, I would say nothing has (as much of) a moving target as the electric-vehicle business. So we need to be able to adapt. I would never commit to what is necessary to have two or three years down the line, because whatever happens out there, we will need to be able to adapt.

WardsAuto: Will you offer longer-range batteries as an option similar to what other automakers are planning?

Green: We will have a base offer that gives you a decent range, and then you would have a premium offer that will give you a long range. Exactly what that range will be I think we need to work all the way into the bid round, if you will, working with the chemistry, working with the weight of the vehicle. We should work as hard as possible…to really push what’s possible.

WardsAuto: You mention the U.S. being a big EV market relatively speaking. Does this suggest building EVs here at some point?

Green: Absolutely. Eventually we will build EVs in all regions.

WardsAuto: Are you concerned at all about the supply infrastructure for batteries and electric motors?

Green: In different ways, yes. I think we will start to see bottlenecks in the industry. When every manufacturer is ramping up, the supply of motors, batteries and (other technology) may become a bottleneck for a period.

WardsAuto: Are you actively trying to line up contracts to ensure supply?

Green: Absolutely. That’s a balance of course, because costs are coming down, efficient new products are coming out. So in some perspective, you don’t want to lock yourself in too early while there’s something more competitive coming out. And at the same time, you need to secure the capacity of certain elements not to run out of supply when the demand comes.

WardsAuto: Are you sourcing batteries from China?

Green: We are, (but) basically I would say batteries are such a key component both (in) value and size…it is difficult to ship due to the restrictions around shipping batteries. So I would say with batteries you typically want to source close to where you build the cars.

WardsAuto: Right down to the cell level?

Green: Well, it’s easier to ship cells than battery packs. So battery packs would be the absolute worst. Ideally you would source the cell close, but if that’s not possible then you would try to import only cells or modules and definitely not entire packs. In the long run, we (should) have battery suppliers in all regions where we build battery cars. That’s a long-term strategic goal.