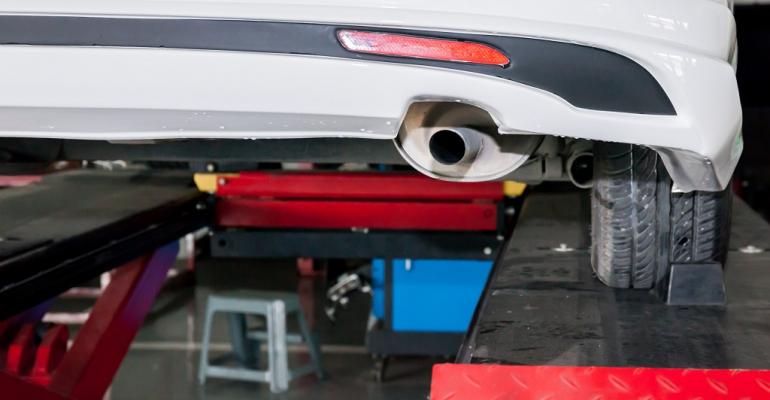 EU Calls for Emissions Checks in 20% of All New Cars

Automakers found cheating could be fined up to &euro;30,000 per registered vehicle found in breach of the rules, with the European Commission able to step in and enforce these controls if and when national regulators fail to act.

BRUSSELS – European Union lawmakers approve emissions-compliance checks on 20% of all new cars already on EU roads in an effort to prevent cheating on tailpipe-pollution tests.

The European Parliament, meeting Tuesday in Strasbourg, France, OKs the requirement in an amendment to proposals drafted by British Conservative MEP Daniel Dalton on a proposed law revamping the EU’s type-approval system of standards for vehicles sold in different member countries.

Under the new rule, which needs ratification by the EU Council of Ministers to take effect, EU member states would have to check annually “at least 20% of the number of types (models) placed on the market” the previous year, with the vehicles selected based on “substantiated complaints,” independent test reports, remote sensing and information from testing facilities.

Clearance for the much-amended scheme comes as the Parliament approves a second report, jointly written by Dutch liberal MEP Gerban-Jan Gerbrandy and German Christian Democrat Jens Gieseke, setting out the findings and recommendations from the yearlong Committee of Inquiry into Emission Measurement in the Automotive Sector formed to investigate the Dieselgate scandal primarily involving Volkswagen and Audi cars.

Under the new type-approval rules, automakers found cheating could be fined up to €30,000 ($32,000) per registered vehicle found in breach of the rules, with the European Commission, the EU’s executive branch, able to step in and enforce these controls if and when national regulators fail to act. Parliament wants greater EU oversight of type approval in the member states to prevent national regulators shielding domestic automakers from checks and sanctions.

While the EC originally proposed European oversight, Parliament’s version of the rules takes this further, boosting the powers of a body representing national regulators called the Forum for Enforcement, but stopping short of backing creation of an independent European Vehicle Surveillance Agency.

The Parliament’s version of the law insists on “a strict separation of roles and responsibilities” between national type-approval and market-surveillance authorities, which must “function independently from each other.” Member states also would have to audit type-approval authorities at least every three years.

To break financial links between automakers and testing agencies, lawmakers insist member states fund type-approval and market surveillance either from national budgets, fees or both. But automakers no longer would pay test houses directly.

Both the law and inquiry aim to prevent a repeat of the Dieselgate scandal that saw VW, Audi and other European car companies use software engineered to produce compliant nitrogen-oxide emissions results in laboratory tests.

However, the regulatory solutions Parliament now supports to prevent cheating, particularly the requirement that 20% of all new models undergo laboratory tests, has automakers running scared. A spokesperson for ACEA, the European automakers’ association, tells WardsAuto: “The industry has grave concerns as to how this would work in practice, given the already existing shortage of testing facilities.”

Automakers also have “serious doubts” about parliamentary proposals on repair and maintenance information and access to in-vehicle data, the spokesperson adds.

Parliament has added “substantive changes” to repair-and-maintenance rules that the original proposal shifts from EU emissions regulations to the type-approval law, but it has done so without a proper impact assessment that substantially would increase access to such information, ACEA complains.

Parliament further wants to require direct access to in-vehicle data through wireless connections. Both automakers and automotive suppliers already are working on a way to provide secure access to vehicle data for those that need it, the ACEA spokesperson says. “Various technical solutions are currently being explored. So, we believe that it would be premature to include some of the ideas proposed in the report in the revision of the type-approval legislation.”

While ACEA appealed to Parliament on these issues before Tuesday’s vote, its pleas fell on deaf ears, possibly because automakers did little to ingratiate themselves to lawmakers during the inquiry, with Gerbrandy telling a press conference after the vote: “Generally the attitude of car manufacturers has been appalling.”

The Dutch MEP criticizes the companies’ lack of apology and compensation for Dieselgate and pledges: “It’s not over yet. It’s inexcusable that the car industry is acting as it is.”

Hearing an ACEA representative answer “yes” when asked whether having cars comply only in laboratory tests – and not also on “real-world” highway tests – was within the spirit of the EU type-approval law was “one of the darkest moments of the last 12 months,” Gerbrandy says.

Nevertheless, the Committee of Inquiry report is not binding and the type-approval provisions still must clear EU member states in the Council of Ministers and be passed by the EC. The current text represents Parliament’s negotiating position on the future legislation, but now the hard work begins in persuading Council and EC negotiators in three-way discussions of the lawmakers’ demands.

Talks among member states are ongoing with the aim to have an agreement ready at the May 29 competitiveness council. Only then can the three-way negotiations begin.

Whatever the shape of the final deal, Dalton says: “This new system replaces one which was at best patchy and at worst ineffective, allowing the car-emissions scandal to be undetected for so long.

“Any manufacturer who wants to try and cheat the system is now very likely to be caught with the combination of these new measures, combined with the real (highway-) driving emissions tests for new cars passed last year.”

The Parliament also has given the EC 18 months to report on action it has taken in response to the Committee of Inquiry’s conclusions and recommendations. Notably the Parliament concludes in its report no national authority had suspected or searched for defeat devices, and neither did the EC raise concerns despite its in-house research arm flagging suspicions.

The lawmakers also want automakers to compensate consumers affected by the Dieselgate scandal and say the EC should propose an EU-wide coordinated, collective redress system.

The Committee of Inquiry chair, Belgian Socialist Kathleen Van Brempt, tells the press conference: “Everybody could see that in terms of consumer rights there is a problem.”