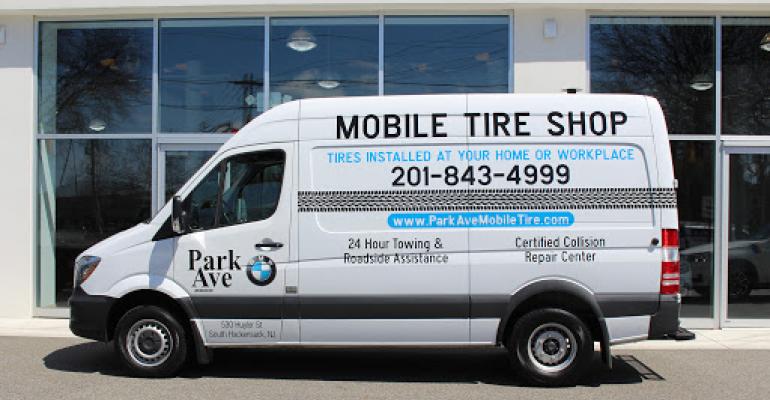 “When people see that van, and the doors open, and they hear that generator start up, they want that service,” says David Bergamotto, service manager for Park Avenue BMW of Rochelle Park, NJ.

The coronavirus has motivated some dealerships to double down on mobile service vans, to deliver light service work in customers’ own driveways or workplaces, according to service managers.

Bergamotto says he has offered some form of mobile service since 2010, so the concept isn’t new. But with this year’s pandemic, customers value the service more than ever, he says. Years of experience also gave the service department a head start over other dealerships, which had to scramble to meet the sudden demand for remote service.

“It’s a no-brainer. There’s not one customer who doesn’t think Park Avenue is outperforming every other dealer,” Bergamotto says during a webinar hosted by Automotive News and in comments during a follow-up phone interview. “When people see that van, and the doors open, and they hear that generator start up, they want that service.”

Park Avenue BMW started out with a single flatbed wrecker, for emergency roadside assistance, Bergamotto says. Today, the dealership has two flatbeds, two mobile repair vans, plus one mobile tire-service van and a second tire van in the works.

He says the dealership probably averages 10 calls per truck per day. BMW of North America subsidizes roadside assistance calls and the tire vans. “I’m very, very happy how BMW has embraced this,” Bergamotto says. “Basically, it pays the lease on your truck.”

Ed Roberts, fixed operations director for Bozard Ford of St. Augustine, FL, says his dealership purchased a mobile-service van in late 2019. The original idea was to serve fleet customers. Roberts was skeptical individual customers would accept the idea, but the idea caught on right away, he says during the webinar.

Then the pandemic hit. In response, the dealership added a second mobile-service van last spring. By the summer of 2021, Roberts says he’d like to have five vans to provide remote service, and as many as 10 vans by the end of next year.

The vans cost about $80,000 each, he says. It was assumed at first they would be used mostly for oil changes, but Roberts says the vans are equipped to do “just about anything,” except internal engine work. “If it can be done safely in the field, we’re going to do it in the field,” he says.

Jim Henne, general manager for Performance Toyota/Performance Volvo Cars, Sinking Spring, PA, says during the webinar mobile service is “definitely on my radar,” but he doesn’t offer it yet. The dealership does offer customers pickup and delivery, though, he says.

“It is an investment,” Roberts says of mobile service. “It’s a commitment to pick up business you would not be getting otherwise.” He says Bozard Ford’s mobile-service vans sometimes even do work for other dealerships, for instance if those dealerships are short-handed.