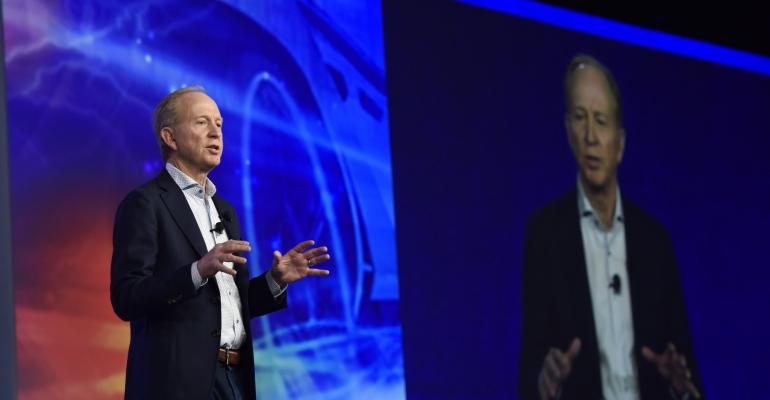 “Rather than letting seismic shifts rock us to the core, let’s make this a defining moment and create our own destiny,” says 2021 NADA Chairman Paul Walser.

For the trade group, threats include franchise-law challenges from electric-vehicle makers who sell vehicles directly to customers, not through independently owned dealers such as NADA members.

Walser advises franchised dealers to stay cool in the face of challenges.

“Rather than letting seismic shifts rock us to the core, let’s make this a defining moment and create our own destiny,” he says in his chairmanship farewell address here at the annual NADA convention.

Alford (pictured, below left), a North Carolina Chevrolet dealer, says franchised dealers are “all-in on EVs” and, more importantly, vital to ushering in the coming “electric age” of vehicle buying. 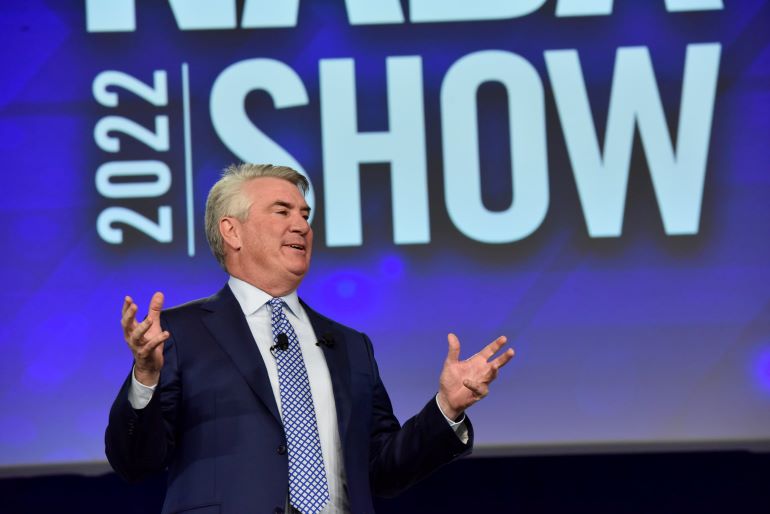 “We are on a path to an electric future. And we cannot get to the end of this road without franchised dealers leading the way,” Alford says.

Tesla entered the market by challenging franchise laws state by state, winning some and losing some. It is still illegal in some states to sell Teslas.

Even so, Tesla has become the darling of the EV world. EV startups, such as Lucid and Rivian, are following Tesla’s direct-sales model.

Traditional dealers and their trade associations early on invoked franchise laws to fight the likes of Tesla in the legal trenches.

Tesla had argued that since it never had a franchise network, franchise laws don’t apply to the California-based EV maker.

While still protective of their turf, franchised dealers appear less jingoistic about it than before, as evidenced by Walser’s NADA convention speech.

“Let’s take what’s already built and improve it,” he says, adding, “Let’s focus on what really matters: capitalizing on our existing dealership presence and finding new and better ways to excite our customers.”

He contends the franchised dealer network has a competitive advantage over direct-sales manufacturers. He urges dealers to stay engaged.

“Engagement starts with knowing all the issues that can help or hurt us,” he says in his NADA speech. “And then going out, speaking up and advocating with your trade associations and with your local officials.”

That includes promoting the dealer franchise system and its advantages for customers and OEMs alike, he says.

“Imagine a workforce where diversity and inclusion are the standard, where we are the industry that encompasses everyone – so much so, that our efforts are respected and celebrated by other industries, government agencies, legislators and everyday people looking for an opportunity or a career. And where there is no shortage of people wanting to be part of it.”