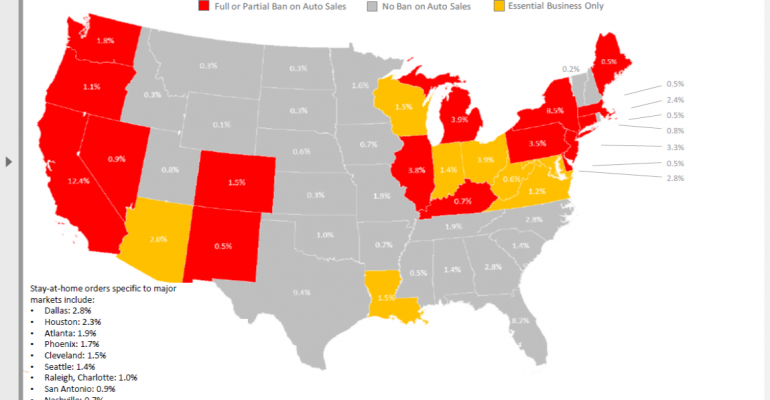 J.D. Power
This J.D. Power map shows which states have and haven’t limited dealership operations because of the COVID-19 virus as of March 25. On March 26, New York’s government relaxed some of its restrictions.
Dealers

“We had to furlough some employees, and it’s not something I’m proud of,” says Bobby Sight of Bob Sight Ford in Kansas City, MO.

With national unemployment rates so low at the start of this year, car dealers were grappling to find qualified job candidates.

Now, many dealerships are laying people off – or contemplating the prospects of doing so – as the coronavirus pandemic carries on.

“We had to furlough some employees, and it’s not something I’m proud of,” says Bobby Sight, operations director at Rob Sight Ford. The Kansas City, MO, store’s service department is open but by state mandate the sales department can only sell vehicles to essential-services businesses.

Power Ford in New Mexico is in the same situation of staying open to fix vehicles but limited in selling them. The dealership hasn’t laid off employees yet, but the thought of doing so eats at its marketing director, Matt Sneed.

“We haven’t made hard personnel decisions yet,” he says. “It would break my heart to tell people they can’t come back to work.”

Sight and Sneed are among dealer people participating in a webinar hosted by Dealers United, a Facebook automotive advertising agency.

Also participating is Michael Renaud, a vice president of Leader in Cars Auto Group that owns two dealerships on Long Island, NY, which he described during the webinar as “ground zero” because of the heavy restrictions the state had placed on dealership operations.

Leader in Cars Auto Group has been relying on its service and parts department to maintain some sort of revenue flow.

“We pick up cars for service and return them to customers,” Renaud says. “We clean the vehicles in their presence.

“We also have an online parts business, and we’ve expanded that, (selling to automotive do-it-yourselfers).”

To drum up service business, the group’s stores are combing through lists of car buyers who have not yet responded to recall notices.

Dealers are contacting each other for ideas on how to get through the health crisis that has crippled their businesses.

Renaud adds: “Whatever crazy, goofy idea you may have, now is the time to offer it.” Renaud says.

Also participating in the Dealers United webinar is Stu Berkley, general manager of Middletown Honda in New York. He says service business is down 40% to 50%.

Berkley reports that an employee tested positive for the COVID-19 virus. He is hospitalized and affected salespeople were quarantined and tested.

“Unfortunately, it took a long time to diagnose him,” Berkley says of the stricken worker. “The hospital at first thought it was allergies. The good news is that he was taken out of ICU the other day.”

Webinar moderator Pete Petersen of Dealers United says, “It is time to understand the true pain of what’s going on.”

A poll of Dealers United webinar attendees indicates 19% of their dealerships are fully operational, 46% are under sales and service restrictions and 35% are service-only but allowed essential vehicle sales.