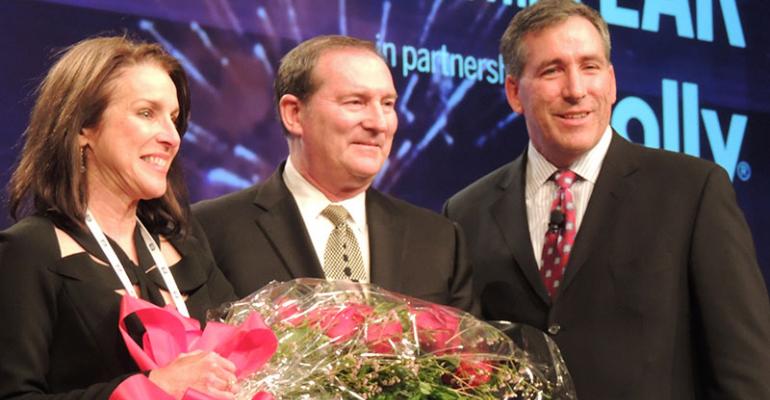 Jeff Teague of Arkansas is selected among 56 nominees for an annual award presented by Time magazine and Ally Financial.

NEW ORLEANS – As a kid Jeff Teague got in trouble at church for using three hymnals on the back of the pew in front of him for something other than their intended purpose.

He would pretend he was driving a car, and step on the song books as if they were an accelerator, brake and clutch. If doing that prompted some church-lady clucking, it also demonstrated a love of automobiles.

Drawing on faith and money from his father, Teague acquired part ownership in a dealership in 1981. He has since become a pillar of his community.

His good deeds are such that the owner of Teague Ford Lincoln in El Dorado, AR, is selected among 56 nominees to become the 2014 TIME Dealer of the Year, an award exclusively sponsored by Ally.

The honor was bestowed during a ceremony at the National Automobile Dealers Assn. convention here.

“This award recognizes the best of the nation’s dealers, not only for their business successes, but for their extraordinary commitment in giving back to their local communities,” says Tim Russi, president of Auto Finance for Ally Financial.

Ally will contribute $10,000 to the worthy cause of the winner’s choice, as well as $5,000 to charities that each of the three regional finalists pick. Ally also donated $1,000 to charities selected by all nominees.

“I’m truly overwhelmed,” Teague says upon receiving the award. “I did not expect this.”

He recalls that the only way he could first afford a dealership as a young man was for his father to help him purchase a distressed store. The younger Teague then built it up. That went on to become a business model he used three subsequent times.

His father was not in the car business, but mortgaged everything he owned to help his son – who had worked in auto sales and then at a public utility – acquire half-ownership in Chevrolet-Oldsmobile in Walnut Ridge, AR.

“I am forever grateful to him for that,” Jeff Teague says. “My method of operation has been to envision the potential in a business, hire good people and to build it into a financially viable institution.”

A pilot for 26 years, Teague has put his flying skills to work for people in need. He has flown church staff for charitable initiatives and was retained on standby by a local liver-transplant patient. He also flew to New Orleans to bring home a child who was a victim of domestic kidnapping.

Teague is chairman of the South Arkansas Regional Airport Commission. “My goal is for our local airport to reach its maximum potential,” he says. Under Teague's leadership, the airport has grown, offering daily flights to Dallas, Memphis and Hot Springs.

He is a member of various service organizations including Rotary International, El Dorado Economic Development Board and two local chambers of commerce.

All dealer nominees are featured on AllyDealerHeroes.com, which highlights their philanthropic contributions and achievements.