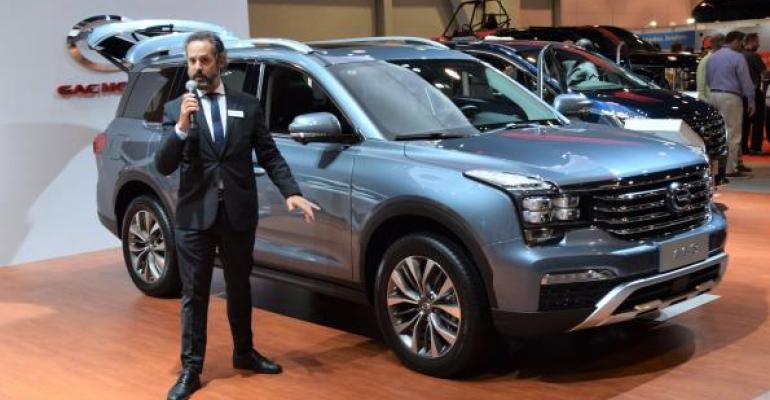 LAS VEGAS – GAC Motor, aiming to be the first Chinese auto manufacturer to sell its own brand vehicle in the U.S., displays three models at a booth on the floor of the National Automobile Dealers Assn.’s convention and expo here.

The automaker isn’t doing any official press interviews. It is only meeting with potential dealers.

“The most important thing we want to do here is to understand (dealers’) thoughts,” Rifei Huang, marketing manager of GAC’s international business department, tells WardsAuto at the stand.

Entering the U.S. market is difficult for any new brand. Chinese nameplates face especially high hurdles because of a history of failed attempts and substandard offerings. Though the stand was filled with visiting dealers, they have their doubts. Still, they are interested.

“If I don’t have to invest a lot, I would consider” obtaining a GAC franchise, says Bill McDaniels, owner of McDaniels Auto Group in Charleston, SC.

Some, though not all, of his concerns were addressed at a closed-door dealers-only meeting here. One of his main concerns was whether GAC has a financing arm. The parent company, Guangzhou Automobile Co. Ltd., does have a financing subsidiary, he learned.

But McDaniels still wonders if GAC will offer leasing assistance in the way a captive lender does. GAC plans to enter the U.S. market with a premium SUV, and leasing is an important sales tool in that segment.

He also wonders if GAC will offer floor planning. Another concern: What kind of marketing support will it provide?

McDaniels figures the automaker needs a marketing budget of $100 million to $150 million to launch the unknown brand in America. As an unknown, it will be “an uphill battle,” he says.

The automaker has done well on J.D. Power quality studies in China. And it has robust sales there, including deliveries of its own brand and foreign-brand models GAC produces in joint ventures with other automakers, including Honda, Nissan and Fiat.

“They come in as a credible company,” Gordon Wisbach, president of GW Marketing Services, a dealership brokerage in New England, tells WardsAuto.

The automaker is working with automotive consulting firm Urban Science to determine good locations for its dealerships, says an industry executive.

It is working with J.D. Power on consumer perception and has done consumer clinics to determine their impressions of its vehicles, he says.

“The Korean model is good for them,” he says. “They need to come into high- volume segments with products that are competitively priced and high-quality,” says Beavis, who formerly worked for Kia. “They need a sales plan, a marketing plan and short-, medium- and long-term distribution plans.”

The U.S. model will be modified from the China version, including a more robust powertrain and some seating changes, he says.

The second model to enter the U.S. will either be a minivan or sedan, he says.

“It depends on which gets approved” by U.S. regulators.