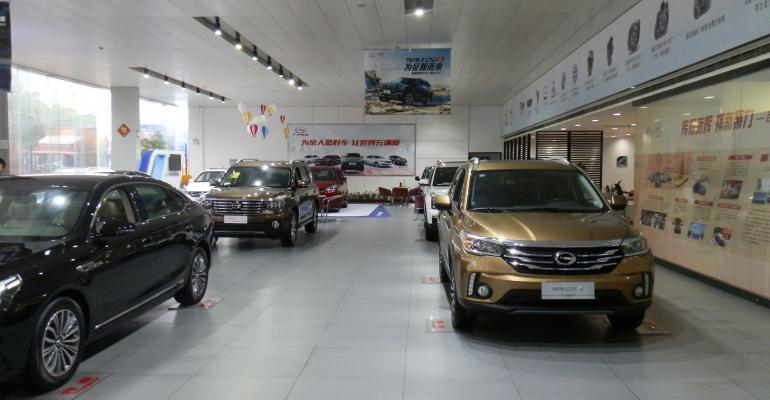 GAC says it will enter the U.S. market with its midsize GS8 SUV. That model will need to be high quality, loaded with technology and interior content, and be competitively priced to stand a chance of gaining a foothold here, industry analyst Jessica Caldwell says.

SHANGHAI – Guangzhou Automobile Co. Ltd., or GAC as the company goes by, is laying the foundation to begin selling vehicles in the U.S., as early as 2019.

Other Chinese automakers have announced similar intentions. None have thus far followed through with a U.S. launch. It is too early to tell if GAC will succeed in the U.S., or even actually sell here.

So, who is this Chinese automaker and how good are its vehicles?

Guangzhou Automobile is a state-owned automaker based in the south China province of Guangdong. The group has diverse transportation-related assets and is listed on the Hong Kong and Shanghai stock exchanges.

Trumpchi is an approximate transliteration of the two characters that compose the brand’s Chinese name.

GAC has a strong balance sheet. In 2016, the Group’s vehicle sales including all its joint ventures rose 27% on-year to 1.65 million units, according to the annual report. GAC’s 2016 net income was the equivalent of $896 million with a profit margin of 12.7%, according to Bloomberg Markets.

The parent firm has a very diversified business portfolio that besides new car and motorcycle manufacturing includes auto components, R&D, engineering, and financial services. It ranked 238 on the 2016 Fortune Global 500 list.

The Trumpchi brand currently sells 10 models in China including four car and six SUV styles. The Trumpchi GS4 compact SUV was far and away the best-selling model in 2016, racking up sales of 333,280 units versus 13,401 units for the next best-selling Trumpchi GA6 sedan, according to LMC Auto.

The SUV segment is the fastest-growing in China, and GAC added four SUV models to its portfolio in 2017.

The Trumpchi brand did well in last year’s J.D. Power China surveys – for a domestic brand. Though it failed to place first in any category, the GS4 model was one of the top three in the Compact SUV segment in the 2017 Initial Quality Study.

Trumpchi ranked above the mass market industry average in the IQS, Vehicle Dependability Study, and Automotive Performance, Execution and Layout Study. That is somewhat of an honor.

Posters trumpeting the JDPA rankings cover the walls at the

Chinese consumers are buying domestic brands instead of foreign brands more now, he says, because the quality has improved a lot. But, he adds, “If Trumpchi didn’t have all its SUV models, it would be in trouble.”

GAC says it will enter the U.S. market with its midsized GS8 SUV. That model will need to be high quality and loaded with technology and interior content, at a competitive price, to stand a chance of gaining a foothold in the U.S., says Jessica Caldwell, executive director of industry analysis at Edmunds.com.

Market growth is slowing, says Caldwell. “It is going to be harder for these challenger brands to gain a foothold,” she says. Plus, GAC is starting from scratch as far as brand awareness is concerned, and building a brand is expensive.

The name alone – containing as it does the name of the controversial U.S. president – could garner some publicity. But GAC has hinted it will change the English name before introducing the brand to the U.S.

In any case, GAC’s goal may not be volume sales in the U.S., says Zhu.

“It’s probably more aimed at telling Chinese consumers – and the government – that they’ve ‘made it’ as a brand, and that their cars are great because look, American consumers like them too,” he says.