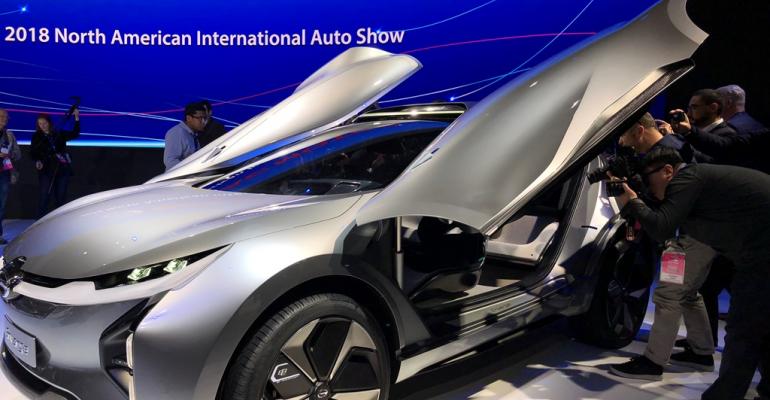 To show its determination, GAC stages an elaborate press conference at the North American International Auto Show in the epicenter of the U.S. auto industry.

DETROIT – Chinese automaker GAC says it will start selling cars in the U.S. in late 2019 and attend the National Automobile Dealers Assn.’s annual convention in March, presumably to recruit dealers.

If all goes according to plans, GAC – short for Guangzhou Automobile Co – would become the first Chinese company to sell vehicles in the U.S. Over the years, other Chinese automakers have said they would do that, but those plans didn’t materialize.

The company says it will enter the U.S. market with its midsize GS8 SUV.

To demonstrate its determination, GAC holds an elaborate press conference at the North American International Auto Show here in the epicenter of the U.S. auto industry.

He adds: “We have come to the Motor City to share our thoughts with the global car industry. You will find us open and innovative. We stand ready to share our high-quality products.”

GAC Group President Feng Xingya says the automaker wants to become a global presence and “hopes to contribute to the well-being of mankind.”

GAC was founded in 1997. It initially produced vehicles only through joint ventures with foreign automakers.

NADA officials attending the press conference say they are pleased GAC plans to attend their annual convention in Las Vegas, seeing that as a sign the automaker would sell vehicles through the traditional U.S. franchised dealership network.

“They must see the value in doing it that way,” Larry Mullen, NADA’s senior director-industry relations, tells WardsAuto. “That’s a big story.”

The concept EV unveiled in Detroit is a compact CUV. Zhang Ian, GAC’s vice president-engineering, says the Enverge is “suited for urban life,” although its sweeping gull-wing doors look as if they would present ingress-egress issues in  tight parking spots.

The concept Enverge is “from China, to America and then the rest of the world,” he says, adding it would offer 240-mile (384-km) range on a 10-minute battery charge. Some press conference attendees say that seems awfully ambitious and would set a range record.

Also speaking at the press conference is auto dealer Ryan LaFontaine, chairman of the dealer-staged auto show. He plays the role of the gracious host.

“It is honor to have you and to see your passion,” he tells GAC representatives. “We can’t wait to see your vehicles on our streets.”