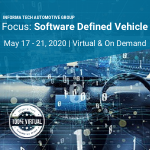 Average Fuel Economy Down in September
Oct 11, 2017
All car segments show declines from prior-year, but SUVs were the only light-truck segment to come in behind year-ago.

World Vehicle Sales Up 4.1% in August
Oct 02, 2017
Growth was seen in developing nations across the globe, as well as in large established markets in Europe.

North America Production Down 8.5% in August
Sep 21, 2017
Numbers were down in the U.S and Canada while Mexico posted another record total.