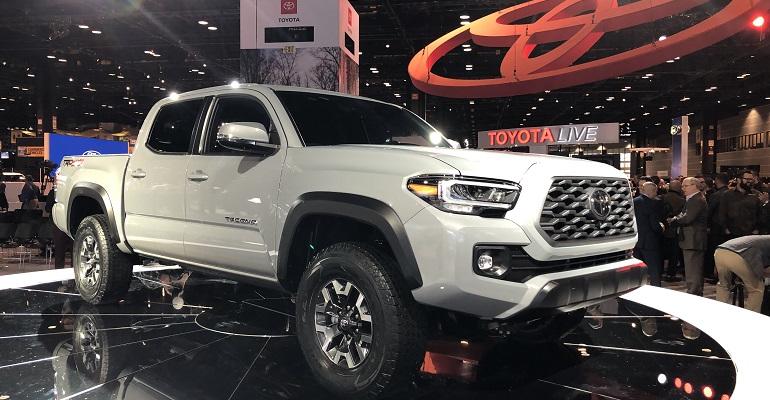 At the Chicago Auto Show, Toyota executive Jack Hollis talks to Wards about the midsize pickup segment getting bigger and more competitive.

CHICAGO – Returning its Ranger midsize pickup truck to the U.S. market after an eight-year hiatus, Ford says it particularly is going after segment-leader Toyota Tacoma.

For a while, the Tacoma nearly had that segment to itself, competing only against the Nissan Frontier after domestics Ford, Dodge and General Motors pulled out.

But General Motors returned with the Chevy Colorado and GMC Canyon in 2014 and Ford re-introduced the ’19 Ranger. Jeep will join the fray with its new Gladiator pickup this year.

“The Tacoma is still king of the hill,” says Jack Hollis, vice president and general manager of Toyota’s U.S. unit.

After the upgraded truck’s unveiling, he talks to Wards about the midsize pickup segment getting bigger and more competitive, what it means to Toyota and how it will affect the market.

Wards: Ford says its new Ranger specifically is targeting the Tacoma. What’s your reaction to that? Will you be playing defense or offense?

It’s great they are coming back to the segment they all abandoned. We’ve stayed the course.

Wards: Why is it great to have more competitors, especially with one of them saying they are aiming to take sales from you?

Hollis: It means if you are out in front, they want to come after you. It challenges our team to keep doing better. That’s why we have a great upgrade with the ‘20 Tacoma and improved TRD Pro Series. To give our customers the best-selling midsize truck for 14 years, going on 15.

It also brings more attention to the segment. It’s just like anything. When more players come in, there’s more marketing and more excitement. More customers are going to shop (the segment). The customer will always win, and that needs to be the case.

Wards: Will the presence of more competitors bring more overall volume to the midsize truck segment, or will it be a case of cutting up thinner slices of the same-size pie?

Hollis: Absolutely it will increase the entire segment’s size. No doubt about it. Proof of that is the small or midsize, entry-level SUV. The Toyota RAV-4 (was one of the first vehicles) in that space. Others came in slowly, slowly. Look how big that segment is today.

I don’t see it being any different with the midsize pickup segment.