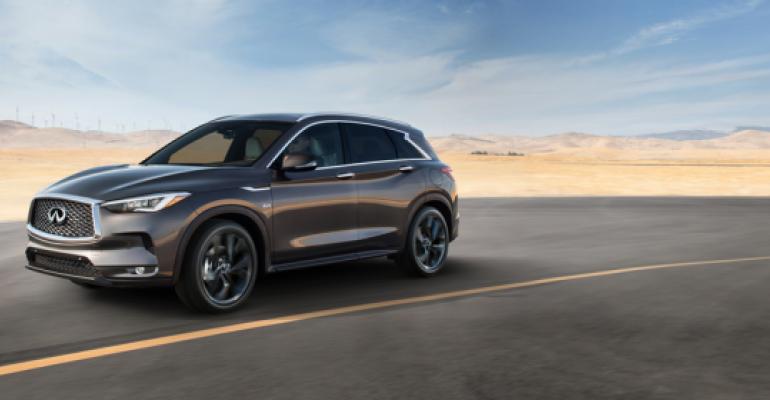 Infiniti Gets Electrified in 2021

Parent Nissan has been a pioneer in battery-electric technology, retailing one of the earliest EVs in the world, the Leaf, since December 2010.

DETROIT – Infiniti announces 2021 is the date it will begin electrifying new vehicles, following in the footsteps of other luxury brands making similar moves.

Infiniti says its models released at that time will be all-electric battery powered, or a type of range-extended hybrid system it dubs e-Power.

“(The) Infiniti proprietary e-Power technology features a small gasoline engine that charges a high-output battery, eliminating the need for an external charging source and providing the convenience of refueling with gasoline while offering the same driving experience as a pure EV,” the brand says in a release.

The Nissan Note subcompact in Japan is the first model in the Nissan alliance, of which Infiniti is a part, to have the e-Power system. It shares parts with Nissan’s Leaf EV to reduce costs, Reuters reported last year when the vehicle with the powertrain went on sale.

Like other luxury makes, Infiniti will maintain its internal-combustion engines, as it says it expects electrified vehicles to make up more than half of its global sales by 2025.

Speaking to WardsAuto Jan. 15, Christian Meunier, global division vice president for Infiniti, teased the electrification announcement, and said the brand would not pursue hydrogen fuel-cell vehicles in the “short-term." He also noted the brand’s link until its electrified-powertrain shift was its new VC Turbo engine, going into the soon-to-launch QX50 CUV.

Parent Nissan has been a pioneer in battery-electric technology, retailing one of the earliest EVs in the world, the Leaf, since December 2010.

Infiniti five years ago had planned a version of Nissan’s Leaf BEV. The vehicle later was canceled, which he says “was a good thing.” Many industry-watchers felt the Infiniti LE concept small sedan, which was to evolve into the Infiniti production EV, wasn’t luxurious enough.

Infiniti at various times over the past five years also has spoken about using plug-in hybrid or extended-range electric-vehicle technology. Nissan has gained PHEV technology with last year’s acquisition of Mitsubishi.

Infiniti had an EREV concept, the Emerge, at the 2012 Geneva auto show.

The concept Infiniti revealed here at the 2018 North American International Show, the Q Inspiration sedan, was thought to be electrified due to its lack of obvious tailpipes, but Meunier says they are hidden beneath the car. However, Infiniti notes the car’s proportions are perfect for electrified powertrains.

Most luxury manufacturers have laid out clear goals for electrifying their lineups, with Lexus for instance noting it plans an electrified variant of every model, or standalone electrified models, on a global basis by 2025.

Volvo has said from 2019 it will offer on its new models some form of electrification.

BMW is planning a new vehicle architecture to enable electrification of any model in its lineup.

Lexus, Volvo and BMW already offer many hybrid-electric vehicles, those with an electric motor paired to a gasoline engine, while BMW also has a full battery-electric vehicle in the i3 hatchback.