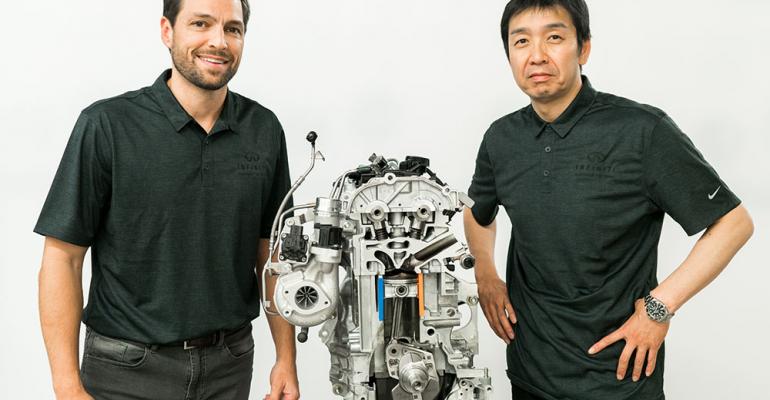 Modifying the compression ratio of a running engine sounds like a recipe for disaster, but after driving Nissan&rsquo;s variable-compression 4-cyl. we can attest it&rsquo;s ready for production.

STANFIELD, AZ – Shinichi Kiga cracks a smile as we lead-foot our Infiniti QX50 test mule down the back straightaway here at Nissan’s desert proving grounds.

Kiga, Nissan’s chief powertrain engineer-gasoline engine project group, has good reason to be pleased, considering what’s happening under the hood and how long he’s worked to bring it to fruition.

That’s remarkable given that, during operation, the engine is instantly and continuously varying the length of the stroke as much as 6 mm to change the compression ratio from 8:1 to 14:1, thereby achieving both remarkable power on demand and fuel efficiency in one tidy package.

The idea of the VC-Turbo isn’t new – Nissan had the idea as early as 1996 and engineers invented the Japanese automaker’s patented multilink device to make it work two years later. But until now no one has been able to put the concept into production.

All that changes in March when the ’19 QX50 premium midsize SUV rolls into U.S. dealerships powered by Kiga’s VC-Turbo engine, and the longtime powertrain engineer couldn’t be happier. Kiga has been immersed in development of the VC-Turbo in Yokohama for the past four years, joined two years ago by his U.S. counterpart, Christopher Day, senior manager-powertrain performance, who works here at the automaker’s Arizona Testing Center south of Phoenix.

In our test runs on both high-speed tracks and dynamic handling courses, the engine performs flawlessly, sending power to the wheels via a continuously variable transmission with D-Step Logic tuned to mimic an 8-speed automatic.

We observe the slightest hesitation in a wide-open throttle launch, but engine speed builds quickly to 2,000 rpm and then turbo boost kicks in to rocket the engine to its 6,000-rpm redline. Under full throttle, the engine holds near redline as it works through the gear ratios and speed builds past 100 mph (161 km/h).

At more modest speeds on the handling track, the engine provides ample power despite constantly varying speeds and throttle demands. We drive primarily in Sport mode, one of three options along with Eco and Standard that affect throttle response.

The engine sounds smooth and refined – almost V-6-like – with a distinct but understated exhaust note combined with pleasant throttle-matching blips on downshifts (in Sport mode). The engine recedes into the background while coasting and is barely audible at low speeds and while idling.

Anyone familiar with Infiniti’s power-packed V-6s, such as the 3.0L twin-turbo that earned a 2017 Wards 10 Best Engines accolade, will appreciate this engine’s capabilities and sophistication.

How It Works, What Comes Next?

Unlike a conventional internal-combustion engine with a set compression ratio, the VC-Turbo varies compression by lengthening or shortening the piston stroke by up to 6 mm via a series of linkages that simultaneously adjust all four cylinders.

Key to the system is the multilink, one of 300 technologies the automaker has patented for the engine, which effectively changes the length of the piston connecting rod to alter the distance it travels to top dead center.

“It’s always a 2.0L, it’s just about how much we’re using of that 2.0L,” Day explains. “We’re changing the cylinder volume that we sweep, but the displacement will stay the same.”

The crankshaft-mounted multilink is actuated by a linkage driven by a small DC electric motor sending its power to a patented Harmonic Drive reduction gear with a ratio of 243:1. The resulting torque easily rotates a control shaft driving a final linkage that adjusts the multilink angle.

That output compares favorably to Nissan’s naturally aspirated VQ35DE 3.5L V-6, but the VC-Turbo delivers 27% better fuel economy compared with the larger engine – equal to a 6-8 mpg (2.6-3.5 L/100 km) gain in a similar-sized vehicle like the Nissan Murano.

Overall, the engine is 18 lbs. (8.1 kg) lighter than the V-6, but about 22 lbs. (10 kg) heavier than a competitor’s 2.0L turbo 4-cyl., Shiga says, due to added hardware to actuate the system. However, increased mass is minimized because part of the variable-compression system eliminates the need for balance shafts.

Shiga and Day say additional applications of the VC-Turbo engine are coming, along with variances in displacement. The system also works with naturally aspirated engines.

The 2.0L displacement for the QX50 was chosen because it allowed engineers to closely match the power and torque of the V-6 it replaces. Only inline engine applications are planned.

The engineers say breakthroughs in computers and electronic controls enabled Nissan to take the VC-Turbo off the shelf and put it into action.

“The industry has been trying to do this for almost 80 years,” Day says. “We haven’t been doing this for 80 years, but there’s been a lot of work in the last 20 (years) because we can see on the horizon that things are going to be getting better electronically.”