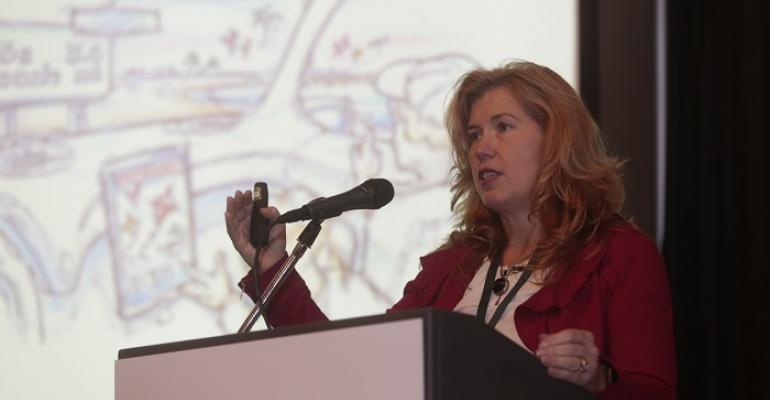 Potential From Monetizing Apps Too Great to Ignore, Says Panel

&ldquo;If the vehicle became a channel for consumption, why shouldn&rsquo;t the vehicle play a role in that transaction?&rdquo; says an FCA executive.

NOVI, MI – Smartphone apps that start your car remotely when it’s cold out, tell you when it needs an oil change or how far your teenage driver is from home have proliferated in recent years.

The handy apps in most instances are free to download and use, but as profitability per vehicle wanes, that may change.

Noting how much General Motors generates from its OnStar subscriber services, one panelist here at the 2016 WardsAuto User Experience conference indicates monetization of apps is inevitable.

While more than an app, Hecker cites OnStar as proof apps could be ripe for a subscription-type model.

“Go check GM’s SEC filing for 2015, in which they publicly disclose they made $1.8 billion on subscription services,” she says, noting GM not only is making money from the subscriptions bought by the vehicle owner, but also gets a cut of every Amazon transaction initiated via GM’s OnStar’s in-car push-button concierge service.

But she cautions automakers to be creative, not charge for a service that people are used to getting for free. She puts forth the idea of an automaker someday charging for or getting a cut of music or audiobooks if that entertainment content was purchased in the vehicle. “If the vehicle became a channel for consumption, why shouldn’t the vehicle play a role in that transaction?”

Dan Ward, co-founder of app creator Detroit Labs, believes there is opportunity for automakers to charge for select features of apps.

“I think in a lot of ways you can take what’s currently out there and just change the business model around to create a more compelling reason to have a connected vehicle…you have to combat the desire to have it all be free,” Ward says.

He suggests an a la carte business model for apps. “You could really start to dice it up” and automakers could charge $3-$4 a month per app feature, he says, believing at that low price point the cost wouldn’t become a financial burden to subscribers.

“Now you’re in the Netflix/gym membership model where it’s not enough to show up on your monthly costs report, it’s just kind of lost in the mix,” he says.

Lock/unlock and remote-start functions of vehicle apps could be free, he suggests, but speed alerts or stolen-vehicle notifications are something car buyers could be asked to pay extra for.

Beyond being a revenue generator for automakers, apps also can “extend the brand experience,” says Covisint’s Tim Evavold, executive director-automotive.

Getting buyers to think positively about their vehicle and its maker when they’re not driving it is one reason Ford says it created its new FordPass app. The increasingly popular owner’s-manual apps work to do this, too.

“A lot of times you’re sitting in the living room, watching the game, watching the news and then you go, ‘Oh, this happened in the car. I don’t want to go into my car (and get the printed manual) to figure it out. I can do it on my iPad,’” Evavold says.

The Covisint exec also promotes the notion apps should work across a variety of devices (car, phone, tablet, laptop) and be set up just once, creating a user identity and preferences that are transferrable, especially in light of the predicted rise in ride sharing.

“For these mobility models to be successful you need to have that transportability,” he says.