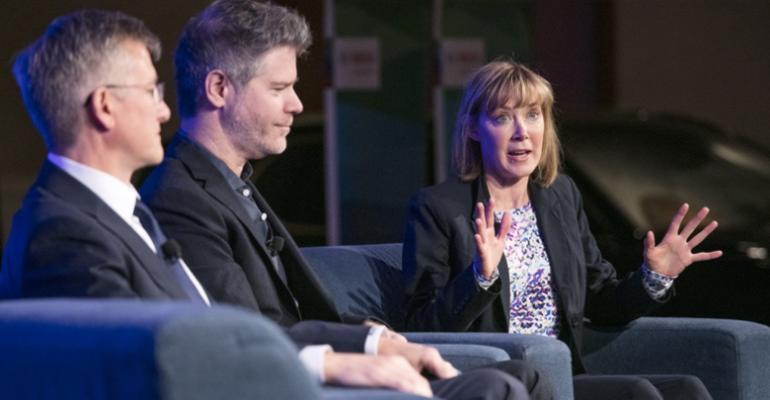 Tomorrow’s Vehicles May Lose the Buttons and Knobs

NOVI, MI – Tomorrow’s vehicles may lose what for years have been traditional interior givens: control buttons and knobs.

That forecast comes from a new online survey of auto industry players and WardsAuto subscribers.

Eighty-three percent of respondents expect automakers will replace conventional buttons and knobs in five years, according to the WardsAuto/Inteva 2019 Automotive Interior Trends report, based on survey data.

The industry polling includes other futuristic topics, including how cockpits might change and which interior features will people most desire in five to 10 years.

That doesn’t mean they all will be, he adds. “It’s a question of user experience.” He cites the benefit of “turning a radio knob and getting instant feedback.”

Maddelein participates in a WardsAuto UX Conference panel discussion entitled “HMI and Cockpit Design: Where Is It Headed?”

If tomorrow’s vehicles are button- and knob-free, what will swap them out?

“I’m blown away by how much technology has advanced,” she says. “Who would have thought five years ago voice (control) could replace everything.”

Wetzel isn’t necessarily betting big on buttons 10 years out. At that point, “you don’t need buttons at all, except for some on the steering wheel,” she says. “You can use controls without ever taking your hands off the wheel.”

Some knobs, particularly in Volvos, are “gorgeous” he says, likening them to jewelry.

Today at least, most consumers prefer sound system dials over touchscreen controls, Lyon says. “We tried volume control without knobs, and the market didn’t like it.”

Key findings in the 2019 Automotive Interior Trend report include:

Vehicle cleanliness – especially as it relates to low-germ counts – is expected as a must-have feature in impending autonomous vehicles that are put to ride- and car-sharing use, says Wetzel.

In such circumstances, cleanability “absolutely” is an issue, says Wetzel, who adds that the first thing she does when seated in a commercial airplane is use an anti-bacterial wipe to disinfect her surroundings.

A self-driving vehicle that virtually cleans itself on the go “becomes really important” in future car-sharing programs, Lyon says. “Stopping and cleaning all the time could slow down the autonomous future.”

He foresees the possibility of easily reconfiguring tomorrow’s autonomous vehicles based on a particular use. For example, a vehicle could function as a delivery van with lots of cargo room, then convert into a people mover with abundant seating.

Maddelein isn’t sure such a morphing vehicle will find a place in the market of tomorrow. “It is possible, but I don’t know if we want to do it.”

For designers, “shared is the future,” Lyon says. Today, ride hailers more readily take what they can get. “When I order a Lyft ride in New York, and a green minivan shows up, a part of me dies. But I don’t wave them off.”