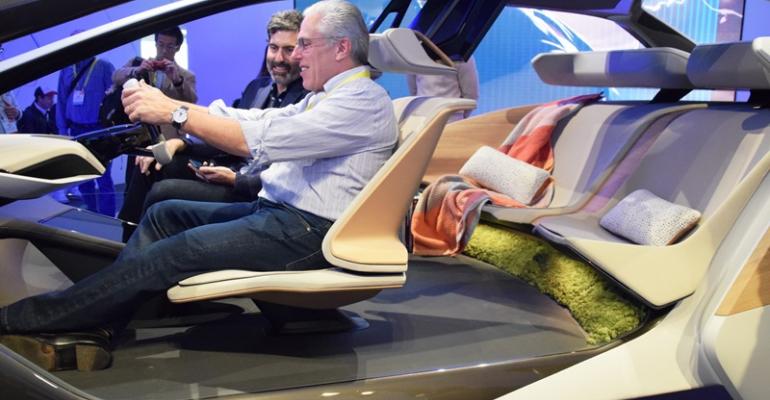 Designer Eric Brown spoke at this week&rsquo;s WardsAuto Interiors Conference about the BMW i Inside Future Sculpture&nbsp;show car, which integrates holographic controls and a second-row lounge with a bookshelf. &ldquo;How do you enjoy your time in the vehicle if it&rsquo;s driving itself?&rdquo; he asks.

DETROIT – The world of self-driving cars may sound gloriously relaxing to some consumers, utterly terrifying to others, and this drastically altered state has automotive designers asking tough questions about the future of mobility.

“How will interior geometry change when the steering wheel no longer is the focus? What future technologies will shape the way we interact? How can the car be a critical hub of your digital ecosystem as the car is becoming a connector essentially between home and work?” asks Eric Brown, interaction design director at BMW Group Designworks, with studios in California, Munich and Shanghai.

BMW says it will bring to market self-driving cars in 2021. “Where does that leave the driver, which is especially important for a brand like BMW that is so driver-focused?” Brown asks during his keynote speech at this week’s WardsAuto Interiors Conference here.

These were the questions designers pondered in dreaming up the BMW i Inside Future Sculpture, which the automaker describes not as a concept car but as a demonstration of the possibilities for vehicle interiors when occupants no longer have to watch the road ahead or steer safely.

The i Inside Future Sculpture was unveiled at the Consumer Electronics Show in January and instantly drew attention for its Eames-style seats, holographic controls and second-row lounge equipped with a bookshelf, throw pillows and sound-deadening moss near the flat sustainable cork floor.

In crafting the show car, BMW designers looked to the past, when people assumed we’d be in flying cars by now and living in homes that resembled the inside of a spaceship. To illustrate his point, Brown calls up slides from the 1980s showing what living rooms were supposed to look like in 1999 – cold, sterile, technical “and totally devoid of life,” he says.

For contrast, Brown shows a photo of his stylishly modest living room today, where there’s plenty of natural-wood furniture and windows to let in sunlight.

“So we need to ask ourselves, ‘Do we want to continue to live in spaceships? Do we want to create spaces that are lacking in life?’” he says, suggesting people will want a cozy living environment for years to come.

The BMW i Inside Future Sculpture springs from the automaker’s “Fixstern” process, which translates from German into fixed star or north star, setting a strategic vision forcing designers to work backward for near-term solutions.

As most concepts are developed, designers “put all the character into the exterior” and then fit the interior within those parameters, Brown says.

“This was inside out. The exterior was a holding shape, kind of a placeholder for what we were doing with the interior, which had a lot more fidelity. All the fidelity was going into what’s happening on the interior,” he says.

“So we are here now at a new inflection point for us, which is the rise of automation,” Brown says. “This is driving a new user expectation all around empowerment.”

A top priority with this interior exercise was to achieve “humanized design” and “move away from this “tron”-like future” and instead create a space that is natural and warm, he says.

Essential were multiple comfortable places to sit, open space, fresh air, light and renewable materials. The front seats are contoured, rotate and have floating head restraints, and an ottoman adds a family-room element.

The instrument panel is scaled down significantly and a steering wheel is present “because it’s still a fairly near-term vision we are painting here,” Brown says.

The lounge element really comes to life in the second row. “One of the designers pushed it further with a bookshelf and cupholders; it was initially humorous as he was doing it,” he says. “But the more we sat with it, the more we loved the idea of pushing this a bit – the analog experiences in the rear seat. How can we really bring the living room home, and it would be in your vehicle.”

The unconventional approach continued with material selection: There’s no veneer or leather in the vehicle. The moss underneath the backseat is used for sound damping, as it is in commercial real estate, and to elevate the mood in the cabin.

“We posed the question: ‘Could we make a living-room feel or space that is alive enough that plants could live there?’”

After his speech, Brown says the moss, although green and resembling heads of broccoli, actually is dead and is sensitive to humidity. In Las Vegas during CES, he says the arid climate made the material dry and brittle. Meanwhile, the moss was fine when the car was taken to Vancouver a month ago for a presentation at TED2017.

The design team didn’t actually determine if foliage could grow inside a vehicle, but Brown says he’d like the subject explored. “I think using more natural materials like that gives you more of a connection to life and well-being,” he says.

On the infotainment side, the team abandoned the cold, “black rectangle” display screen that has become ubiquitous in vehicles today and instead embraced the emerging trend of “shy-tech,” the notion that user interfaces need not always be staring the driver in the face.

“We wanted all the technology in here to come on when you need it, then go away when you don’t,” Brown says.

The main control system consists of BMW’s groundbreaking HoloActive Touch, which acts like a virtual touchscreen. Its free-floating display is operated using finger gestures and confirms the commands with what the driver perceives as tactile feedback.

Brown says the enabling technology is a “micromirror,” a pane of glass in the center console with an array of prisms reflecting an image downward stereoscopically so it appears to be floating in space. A gesture camera on the instrument panel tracks finger movements when the driver is scrolling through virtual menus. When the driver makes a tapping motion to select, an array of 180 ultrasonic jets disrupts the air at your fingertips, creating positive feedback.

Asked how soon BMW could introduce holographic technology in production vehicles, Brown says it requires a lot of interior space to be effective. “And getting it integrated seamlessly into the instrument panel is a bit of a challenge until that technology is more robust,” he says.

Ultimately, the BMW i Inside Future Sculpture focuses on time management, allowing for individual “me time” and social interaction “we time.”

“How do I get as quickly as possible to my destination, and what’s the navigation scenarios that will take me there?” Brown says. “With this vehicle that is fully autonomous, the idea is you want to maximize your time. How do you enjoy your time in the vehicle if it’s driving itself?”

Gesture Control One Path to Simpler Interiors
May 12, 2016