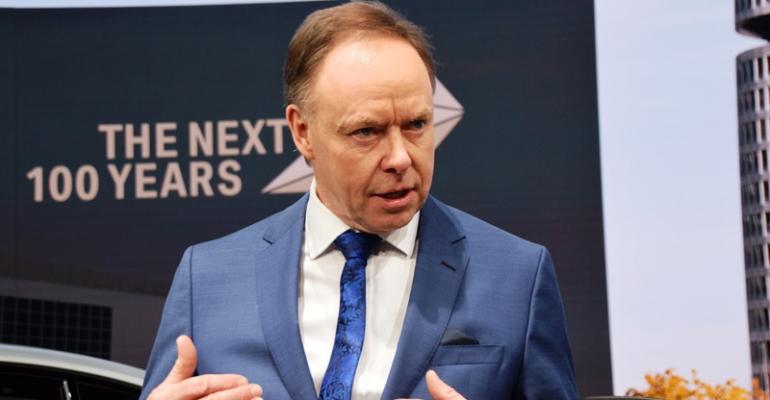 The board member says BMW &ldquo;will work with the new administration in the same way we&rsquo;ve worked with administrations before.&rdquo; That includes trying to educate the Trump team about BMW&rsquo;s massive U.S. manufacturing operations.

DETROIT – It appears no automaker, foreign or domestic, can escape President-elect Donald Trump’s wrath for investing in operations south of the border.

General Motors, Ford and Toyota have had their turn, and now BMW, based in Munich, has been called out. In an interview with Germany’s BILD Zeitung, published late Sunday night, Trump said BMW would “waste its time and money” building a plant in Mexico, and that he would impose on the Bavarian automaker a “35% border tax.”

Speaking with reporters here at the North American International Auto Show last week before Trump issued his warning, BMW Board Member Ian Robertson says Mexico represents an important strategic investment, and that the automaker has not decided whether vehicles produced there will be imported to the U.S.

“We’re building capacity there which will supply cars to many countries in the world,” he says. “Mexico is additional capacity. The beauty of BMW is, we are very flexible in the sense we can change things to suit requirements as and when they develop.”

The German automaker broke ground in mid-2016 for the plant in San Luis Potosi in central Mexico; production of 3-Series sedans is slated to begin in early 2019. It will be the automaker’s second North American plant.

BMW’s plant in Spartanburg, SC, has been producing vehicles for more than 22 years and has grown to become the automaker’s largest manufacturing site in the world.

The plant ushered BMW into the high-volume, profitable segment of utility vehicles, having started with production of the first-generation X5 in 1999. Today, it also produces the X3, X4, X6 and, soon, the larger 3-row X7.

“Overall, we’re very happy to be in the U.S.,” Robertson says.

Trump may not be aware of it, but BMW Spartanburg exports 70% of its output to other markets in the world, including Mexico. The value of the exported vehicles amounts to $10 billion a year, making BMW the largest exporter of vehicles from the U.S.

“We are very comfortable. This is our second home,” Robertson tells journalists. “There’s more investment here than in any other country in the world. From that perspective, I think we will work with the new administration in the same way we’ve worked with administrations before.”

As BMW prepares to expand its CUV portfolio with the X7, rival Audi is adding its fourth, the Q8, next year. Robertson doesn’t seem too concerned.

“We’ve got more (luxury utes) than anyone else,” he says. “We started this trend with the X5. I think we’re filling every potential niche, and we’re increasing our capacity all around the world on those particular products equally.”

Fellow German automaker Volkswagen may have sullied the waters for diesel engines after its 2015 emissions cheating scandal, but Robertson says BMW still sees diesel as “a very strong technology in some markets in the world, primarily Europe.”

The popularity in the U.S. of these compression-ignition engines in light vehicles remains low, reaching 3.1% in 2014 and falling to 2.6% in 2016, according to WardsAuto data. But BMW remains optimistic about diesel’s prospects in the U.S.

However, he notes in Europe buyers of small cars who used to pick the diesel option now are choosing plug-in hybrids or more-efficient gasoline engines. “For bigger cars, it’s primarily still a diesel market,” he says.

He declined to confirm if the new BMW 5-Series will be available in the U.S. with a diesel.

Looking further to the future, Robertson sees no difficulty in continuing to market BMW as the “ultimate driving machine” even as the brand is aggressively selling eco-friendly EVs, PHEVs and, eventually, self-driving cars.

“I think we are entering a phase now where we will see an even more exciting drive,” he says.

“There are those times when driving is not so much fun – if you’re in heavy traffic. I come up the autobahn from south of Munich every morning, and I drive at 250 km/h (155 mph) on the autobahn. It makes me feel good.

“But the last 10 km (6 miles) are in bumper-to-bumper traffic. It’s not so much fun anymore. I’d rather do my emails then. So, kicking into some form of autonomous driving is very helpful in that area. When the open road’s there, sheer driving pleasure will always be fun.”