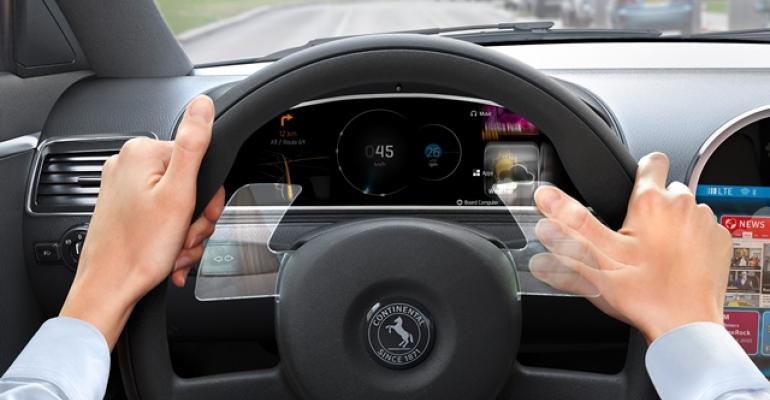 <p><strong>Continental expects Hands on Wheel Gesture technology to be available for production in 2018.</strong></p>
Vehicles>Interiors

A panel devoted to the user experience in vehicle interiors generates news from Continental, which offers another approach to gesture control integrated within the steering wheel.

DETROIT – The auto industry is considering multiple ways for people to interact with their vehicles, and supplier Continental offers a solution that ties together gesture control and touchpads in a convenient place: right on the steering wheel.

Dubbed as Hands on Wheel Gesture, Continental presented the technology here at this week’s WardsAuto Interiors Conference on a panel dedicated to enhancing the user experience in vehicles of tomorrow.

Using these gestures, drivers can cycle through music, apps and navigation options; answer calls and control the trip computer, all with both hands on the steering wheel.

“We think this is a good way to add gesture (control) to a vehicle,” says Susan Drescher, Continental’s global HMI expert.

Providing an actual location for gesture control – such as the plastic pads – eliminates a lot of guesswork and a potential source of driver distraction, Drescher says. The new BMW 7-Series uses gesture control, but it requires the driver to perform specific motions in “free air” in front of the center stack.

“We think sometimes free air is a little bit hard when you are trying to do certain commands where the hand has to be in a certain area,” she says. “It’s hard to find the right location for your hand. This gives you a place where your thumb lands.”

When fully developed, Continental’s concept can eliminate all electronics from the steering wheel. Drescher says the technology should be ready for production in 2018.

An effective interface between driver and vehicle is vital as the industry advances with self-driving cars and as the “user experience” becomes core to vehicle development.

“What happens when you drive a car at night? You don’t see the exterior, and you don’t see your interior,” Gieske says in his panel presentation. “You see the experience, the interfaces lighting up and information coming at you. Imagine Apple without a user experience with their iPhones.”

FCA is developing “self-learning” vehicles that are more intelligent and can detect a driver’s patterns and habits. For instance, vehicles with remote start also can turn on the heated seats if the temperature outside is below 40º F (4º C).

In another example, the new Chrysler Pacifica minivan answers the age-old question from impatient youngsters: “Are we there yet?”

The question becomes an interactive game as children can use the two high-resolution display screens in the second row to chart a road trip from starting point to destination.

Automakers are loading up vehicles with infotainment options to meet consumer demand for the kind of features they enjoy at home and work, but that integration has not always been successful, says Gary Braddock, partner at Pocketsquare Design.

In the past, vehicles had simple controls (for radio and climate, for instance) that were easily recognized and could be operated without looking at them. The complexity of today’s vehicles forces drivers to look at controls rather than the road, Braddock says.

“More functions have brought more controls,” he says. “In some cases, there are too many buttons.”

Forcing drivers to look away from the road and instead at controls “is not really a good plan for future design,” he says.

Braddock refers to NHTSA’S “Two-Second Rule,” which says a driver should be able to perform six HMI tasks at two-second intervals.

“But that means I take my eyes off the road and am looking down for two seconds,” he says. “A lot happens in two seconds on the road. Every time I look up, something changes.”

Because of these risks, automakers are attempting to eliminate buttons, instead using touchscreens, voice activation and graphical representations on displays in the center stack and gauge cluster.

“It’s like a graphic Darwinism happening, step by step,” he says.

Braddock refers to Honda, citing a steering wheel in 2000 that had no buttons to control radio volume and other features and then a 2016 Honda steering wheel loaded with them.

“By 2016, there are so many controls that I can’t operate this without looking,” he says. “For a company that’s known for consistency, that’s not what anyone would expect.”

“The purpose is to develop systems where you can get quantitative data about a user-experience system not only after it’s designed but while it’s being designed,” he says.

That means measuring font size, deciding how much information is appropriate to display, checking adherence to NHTSA guidelines and ensuring proper ergonomics, familiarity and human factors.