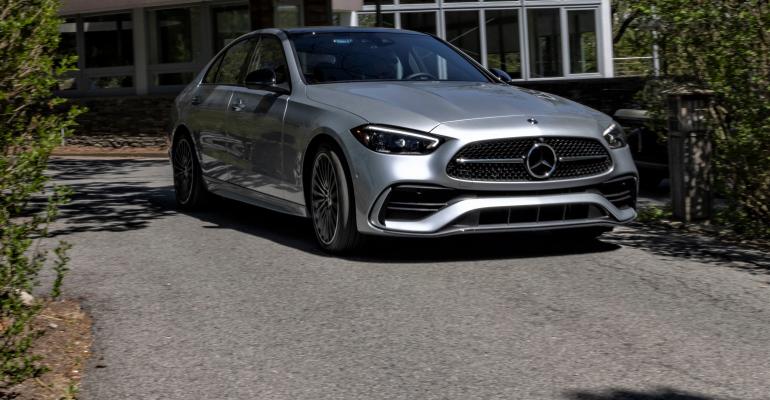 The C-Class’s predecessor was the Mercedes-Benz 190. When it was introduced in 1982, it was nicknamed the “Baby Benz” and carried an entry-level image relative to the rest of the automaker’s lineup. The redesigned C-Class aims to put that image to rest.

Standard features include large display screens in front of the driver and on the center stack, and the latest-generation MBUX infotainment system, which were introduced on the flagship S-Class sedan about a year ago.

“Features typically trickle down from the most expensive cars, but really, it’s a matter of when the new cars are introduced,” says Bernhard Glaser, director-product management for Mercedes-Benz USA.

Some of the latest features introduced on the S-Class have reached the E-Class sedan and GLE CUV, and now they’re reaching the C-Class, Glaser says in an interview at a press introduction here.

“Some people call it a mini S-Class,” he says.

Glaser says the two large screens are a good example of a standard feature that today’s C-Class buyers want, but which people wouldn’t necessarily expect in the C-Class. “Every luxury customer wants the large screens,” he says. 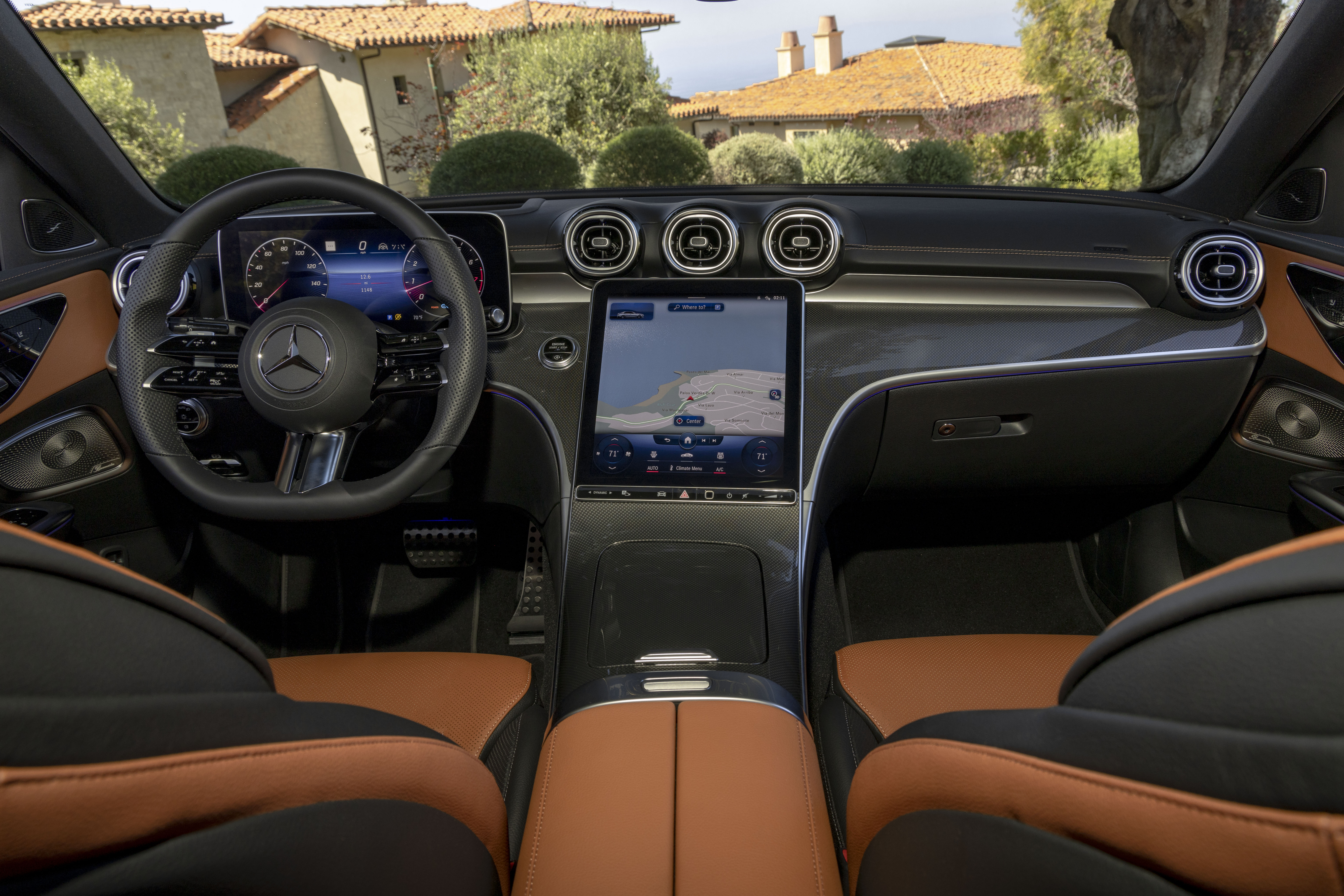 The predecessor to the C-Class was the Mercedes-Benz 190. When it was introduced in 1982, it was nicknamed the “Baby Benz” and it carried an entry-level image relative to the rest of the Mercedes-Benz lineup at the time.

The redesigned C-Class aims to put that image to rest. It’s already outdated, considering the German automaker’s U.S. sales and marketing subsidiary has offered models based on the smaller A-Class for several years, starting with the CLA CUV in 2013.

The previous generation of the C-Class was introduced in 2014. Since then, over 2.5 million C-Class sedan and wagon models have been sold globally, the highest-selling Mercedes-Benz model in that time, the company says.

S-Class-style options for the new C-Class include an augmented-reality version of the MB Navigation system, which superimposes traffic signs, directional arrows, lane-change recommendations, house numbers and other graphics on a video image from a forward-facing camera, which is displayed on the center screen.

The visual cues, together with audible prompts, make it hard to miss an upcoming turn. The augmented video feature is part of a package of options that retails for $1,700.

An optional upgrade to the intelligent cruise control also enables hands-free driving, but only for a few seconds, before the system prompts the driver to put their hands back on the wheel. If the driver doesn’t respond to increasing levels of warning, the car slows down and pulls itself over. That’s part of a Driver Assistance Package, which retails for $1,950.

Suggested retail price for the ’22 C-Class starts at $44,600 for the C300 Sedan, including $1,050 destination charge. The base model includes a lot of content, including those large screens, but options can add up quickly. 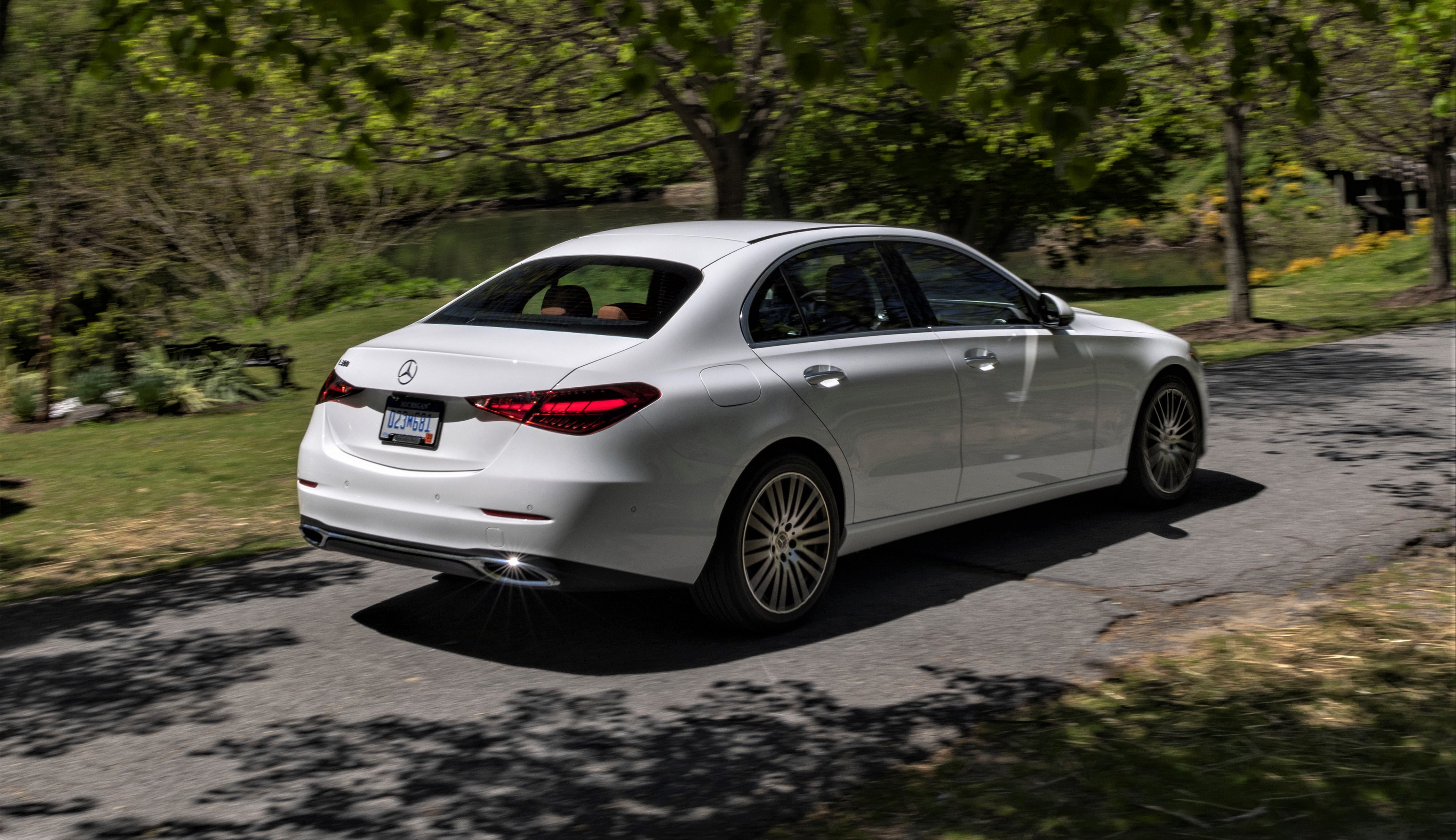