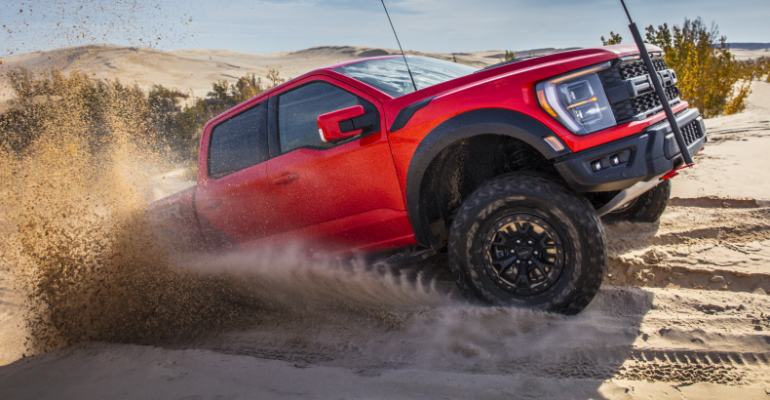 As a second truck, just for hammering the dunes or running the backwoods trails, the Ford F-150 Raptor R makes perfect sense.

MUSKEGON, MI – There’s no actual need for 700 hp in a sports truck unless you take advantage of it every chance you get.

Therefore, should you ever find yourself with a ’23 Ford F-150 Raptor R, you should probably head for the trails and dunes as often as possible. We recently tested the new desert-tuned Raptor R in the Silver Lake dunes here along the shores of Lake Michigan.

The Raptor R is the beefier, brawnier sibling of the new F-150 Raptor. There are visual changes, sure, but the biggest upgrade lies under the hood, where Ford exchanges the 3.5L twin-turbocharged EcoBoost V-6 found in the ’23 Raptor for a 5.2L supercharged V-8. This is a recalibrated version of the engine found in the Mustang Shelby GT500, but here it’s been paired up with stainless steel exhaust manifolds, a new oil cooler and filter and a deeper oil pan.

As you might guess, fuel economy is abysmal: 10 mpg city, 15 highway and 12 combined (in L/100 km, that’s 24 city, 16 highway and 20 combined). The Raptor R does just fine on standard roads, but with those fuel economy numbers, it’s naturally not the ideal commuter. 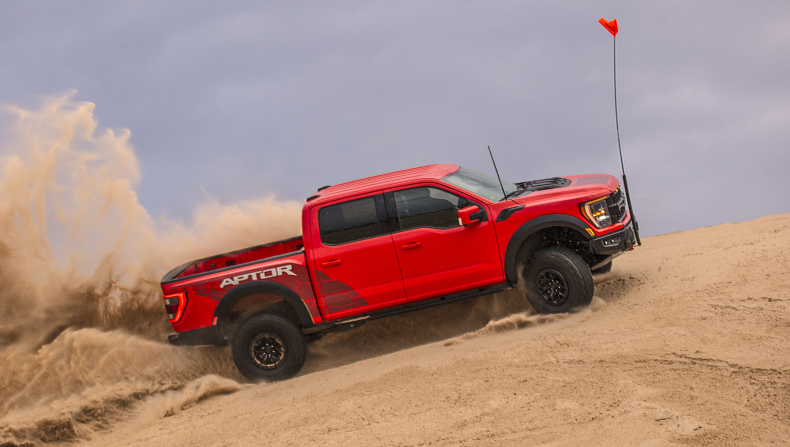 Other changes can be found in the front axle, which is now stronger to handle the higher torque, and a larger-diameter aluminum driveshaft. A specially tuned torque converter smooths out acceleration no matter what surface the Raptor R might find itself on.

The suspension system carries over from the standard Raptor, but it’s been tuned for the R’s increased performance. The familiar Fox Racing Shox, 5-link rear suspension and independent double-wishbone front suspension are all here, but the Raptor R has a unique coil spring rate. Also, the optional BFGoodrich K02 37-in. all-terrain tires from the Raptor are standard on the R, providing 13.1 ins. (333 mm) of ground clearance and offering 13 ins. of wheel travel in the front and 14.1 ins. (358 mm) in the back.

All of these changes make the Raptor R an impressive beast away from staid, paved surfaces. The Raptor R has four preset drive modes – Normal, Sport, Quiet and Baja –  and the ability to save  your custom settings for the drivetrain, steering and suspension systems.

Baja was the setting of the day on the dunes. And it didn’t take more than a few climbs and drops to prove that what the engineers programmed was indeed a capable way for the truck to handle the sand.

Thanks to the drive modes and a rear differential lock to optimize power delivery, we never lacked grip or power on the Lake Michigan shore, and the Raptor R more than proved itself on the dunes, whether going for speed, hill climbs or jumping. Any time the truck didn’t manage a turn or a bump, the problem lay in the driver’s white knuckles, not in anything inherent in the truck.

None of this is surprising. The Raptor R is a purchasable vehicle inspired by extreme Baja 1000 desert races. Still, upgrading the Raptor with the R package costs $30,575 in addition to the Raptor’s $78,570 sticker price (including the $1,795 destination charge).

The extra money gets you the engine upgrade and other powertrain changes mentioned above, as well as plenty of visual changes: black exterior accents, unique R badges and Ford Performance Code Orange highlights such as tow hooks and interior fabric stitching on black seats. The F-150 Raptor R is available in eight exterior colors, with Avalanche and Azure Gray Tri-Coat coming to the Raptor for the first time.

All this fun and power doesn’t make the ’23 F-150 Raptor R a sensible truck to buy, though. $30,000 is a lot of money to spend on pretty upgrades and more off-roading fun. So much that it really only makes sense if you’re going to head for the trails and dunes as often as possible – now, for instance. 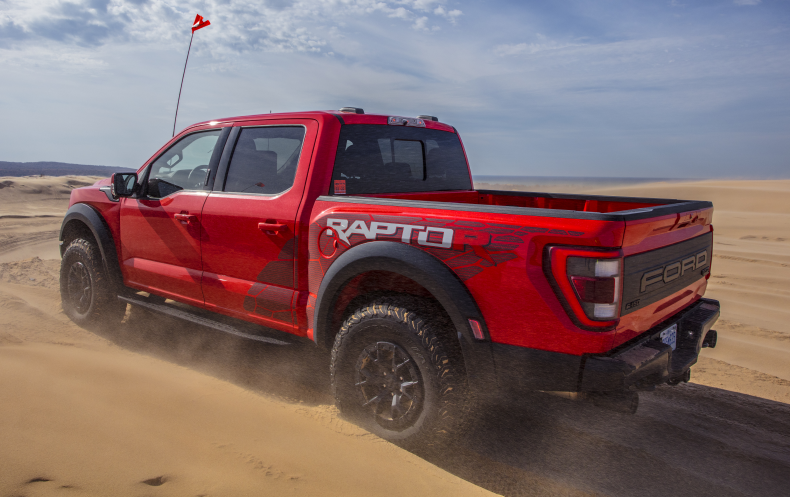