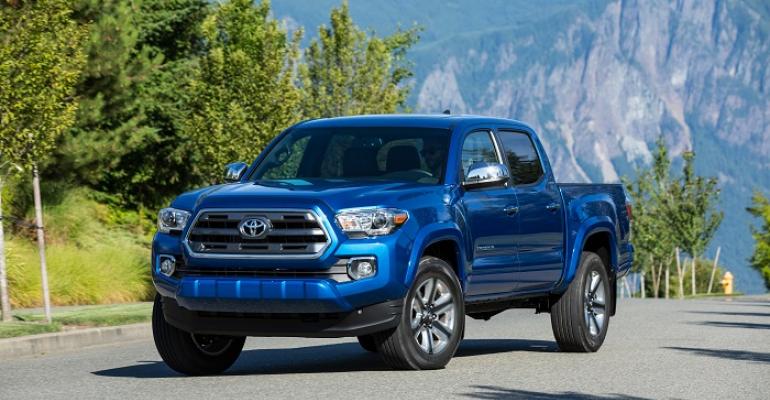 New Tacoma Shines Off-Road But Not a Slam-Dunk Truck

The latest iteration of Toyota&rsquo;s best-selling pickup not surprisingly maintains its tough and rugged image, but falls shy of the GM twins in various attributes.

TACOMA, WA – The Toyota Tacoma has been the No.1-selling small pickup in the U.S. for 10 years and this year is headed for an 11th win.

What’s more extraordinary is the Tacoma that achieved those wins essentially is a circa 2004 model. Yes, the truck, affectionately called the Taco by its loyal fan base, hasn’t been redesigned since Dubya was in office, flip phones were all the rage, and Outkast implored listeners to “shake it like a Polaroid picture.”

It’s impossible to know if the Tacoma has risen to the top because it was so good or the competition was so underwhelming.

Due to the shrinking price gap between their aging small pickups and more-profitable large trucks, Ford and Ram forwent redesigns and dropped the Ranger and Dakota, respectively, although there is speculation the former will return.

The Nissan Frontier is almost as old as the Tacoma, last redesigned in early 2005.

Do you remember the Suzuki Equator and Mitsubishi Raider? No? Me neither.

But there has been some life in the segment as of late with last year’s introduction of the new Chevy Colorado and GMC Canyon twins.

Both are getting good reviews and both compare favorably, and in many respects are better than, the new ’16 Tacoma driven here and going on sale Sept. 10.

But the General Motors trucks fall short of the Tacoma where they always have: off the pavement.

The new Tacoma almost defies the laws of physics as we, or should I say the truck, climb up and down a 40-degree slope with minimal fear, thanks to a new crawl-control feature. It’s a cruise control for off-roading, automatically controlling braking and acceleration at speeds between 1 and 5 mph (2-8 km/h), meaning drivers need only focus on steering, which was plenty to focus on when needing to dodge trees, giant boulders and dropoffs in the back country north of Mount Rainier.

Other measures taken by engineers to make the Tacoma even more off-road proficient include a segment-first multi-terrain selector with five traction-control modes (mud and sand, loose rock, mogul, rock and dirt and rock), as well as updated springs and spring rates for the carryover front double-wishbone and rear leaf-spring suspensions. The base SR Tacoma along with the SR5 and Limited grades receive standard shock-absorber tuning, while the Sport and Off-Road grades, which take over where the ’15 PreRunner left off, get sport- and off-road-tuned suspensions.

The front third of the frame now is fully boxed, the center of the frame has a reinforced C-channel and the rear uses an open C-channel design. The latter not only allows for more articulation of the rear suspension, but also is a lighter-weight setup that should increase rear-seat passenger comfort, Toyota says.

One Carryover Engine, One New

The 4-cyl. can be mated to a carryover 5-speed manual transmission or a new 6-speed automatic, also available for the V-6. A newly designed 6-speed manual is optional for ’16 V-6 Tacomas.

We spent the majority of our time in the high-end Limited and mid-range Off-Road grades, both with the new 3.5L.

As with most modern fuel-economy-focused automatics, the Tacoma’s 6AT doesn’t downshift when you want it to, or hold the lower gear long enough, so we call on the 6AT’s self-shifter frequently.

Given its straining for torque, the engine is raucous. We can’t detect the D4-S’ new self-cleaning mode during idle, but Toyota warns some people may.

Road noise, thanks to the rough-aggregate surfaces of greater Seattle, also is very evident. We assume Toyota’s testing of the Tacoma’s extensive noise, vibration and harshness countermeasures occurred on smoother surfaces.

As with every new vehicle striving to please finicky consumer ears and meet government fuel-economy regulations, the new Tacoma is said to be quieter and more aerodynamic than the model it replaces. Toyota claims a 43% overall improvement in NVH vs. the outgoing model and a 12% drag reduction, from 0.39 to 3.83, the largest drop in its history between vehicle generations. However, the 12% cut only is for models with an optional lockable tonneau cover, expected to account for just one-third of the initial build.

The Tacoma’s power steering is a strong point, with perfect feedback and just the right amount of assist. A U-turn reveals an unexpectedly tight turning circle.

Style-wise, the truck gets more menacing sheetmetal, with strong character lines and a big hood scoop. But its underbite, aka protruding lower bumper, isn’t attractive. It should placate federal regulators, however, who are expected to enact more stringent pedestrian-vehicle crash rules.

The Tacoma’s interior was a focal point for designers and engineers, as the 11-year-old outgoing truck lacks a lot of the niceties found in modern vehicles.

“Our goal was a complete design overhaul of the interior,” Tacoma Chief Engineer Mike Sweers says.

So the pickup predictably gets better materials, including cloth and leather seats with interesting patterns or embossing.

On the infotainment front, a touchscreen is standard on all grades and Scout’s GPS subscription-free navigation app is integrated into the Entune Audio Plus head unit of the second-most-affordable Tacoma, the SR5.

Even with the updates, though, the passenger cabin of the ’16 truck still bears more than a passing resemblance to the ’15 model in its layout and copious amounts of faux-leather hard-plastic trim.

The Tacoma’s flimsy plastic air vents are a stark contrast to the expensive-looking glass touchscreen in our Limited tester.

Also jarring – shocking really, is the $37,000 Limited’s lack of a power driver’s seat.

Fit and finish is so-so in test vehicles. Panel fits are tight but door-pocket plastic flashing is present, as is a sticky, glue-like substance on the Tacoma Limited’s center console.

For best interior in the segment, we have to give the edge to the GMC Canyon, a 2015 winner of a Ward’s 10 Best Interiors award. The Canyon has lower-gloss plastics and more soft-touch surfaces. It also has a bigger touchscreen and a standard power-adjustable driver’s seat.

Frankly, if a midsize-pickup buyer doesn’t dream of driving with two tires off the ground, the Canyon is worth a strong look.

However, with the Tacoma boasting some of the highest loyalty rates among any model in the Toyota lineup, it may be difficult for GM to gain an edge no matter how many accolades the Canyon, or Colorado for that matter, collect.