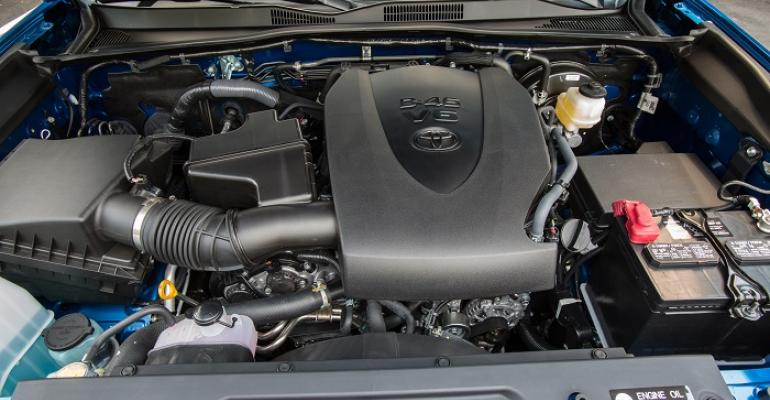 Drivers may hear the self-cleaning taking place during a hot idle, and the process could last from 10 seconds to as long as 10 minutes, depending on driving patterns and the amount of build-up on the injectors.

TACOMA, WA – Toyota advances its D-4S port- and direct-injection system with the technology’s installation in the new Tacoma midsize pickup.

The automaker believes it has solved the conundrum of carbon build-up on injectors with a new self-cleaning feature for D-4S, a technology that debuted 10 years ago on the ’05 Lexus GS 350 and ’06 Lexus IS 350 and today is used in the current-gen Lexus IS, GS and RC and Scion FR-S sports car.

“What we’re doing is we have a slit on the side of our injector and we’re blowing that carbon off,” Mike Sweers, the ’16 Tacoma’s chief engineer, tells WardsAuto here during the truck’s media preview. “If we tried to use just high pressure, using just the nozzle itself, you would clean the bottom of that nozzle.

“But since the carbon grows from the outside and comes around, you would still plug up that injector,” he adds. “So by cleaning on the outside of that, we get a clean injector all the time.”

Drivers may hear the self-cleaning taking place during a hot idle, and the process could last from 10 seconds to as long as 10 minutes, depending on driving patterns and the amount of build-up on the injectors.

“When you go into a hot-idle situation, the system is going to look at the time that it ran, the number of cycles the injectors went through, the temperature of the injectors and then it goes into a self-cleaning mode,” Sweers says. “Because we have the port injection, I can continue idling the engine without having any side effects.”

He compares the technology to a self-cleaning oven, as no additives are necessary.

“You stop at a light (and) it may clean for 10 seconds, you’re going to take off and stop at another light and it’s going to clean for (another) 10 seconds,” he says, noting the engine will deliver torque when a driver wants it and shut off the cleaning mode.

The 10-minute cleaning cycle occurs during longer idling, such as in a drive-thru line.

The next-generation D-4S is paired with the next generation of Toyota’s 2GR engine family, the 3.5L 2GR-FKS. The previous iteration of 2GR, 2GR-FSE, is a 4-time Ward’s 10 Best Engines winner.

Both 2GR-FKS and 2GR-FSE are all-aluminum Atkinson-cycle engines. But differentiating the new 2GR from the existing 2GR are reduced-friction oil sumps, a new variable-valve timing system that shifts between Otto and Atkinson cycles and an exhaust manifold integrated into the cylinder head, a design that has a variety of benefits, including weight reduction and the ability to use engine coolant to cool exhaust gas.

A side benefit of the design: the catalytic converter is closer to the head, making theft less likely.

“You can’t get up there and take them,” Sweers says. “It’s amazing what you can do with a Sawzall,” he says of a reciprocating saw often used by thieves to cut off easily accessible catalytic converters.

Catalytic converter theft is on the rise, as the emissions-control device contains valuable precious metals and more Americans are driving light trucks that sit high off the ground with easy access to their undercarriage.

Toyota says the new 6-speed automatic is lighter and with fewer components than the ’15 Tacoma’s 5AT, and the 6-speed manual boasts more robust carbon synchronizers and improved shift feel vs. the ’15 Tacoma’s 6MT.