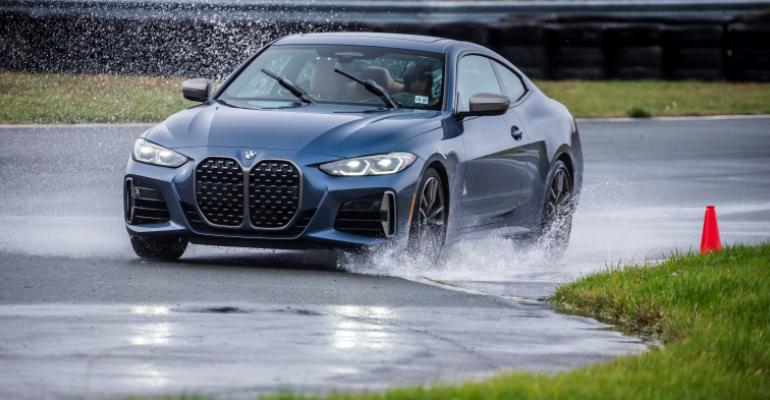 On a New York test track, the redesigned 4-Series displays its handling acumen, even on a miserably chilly, rainy, autumn day in the Catskills.

MONTICELLO, NY – BMW’s best-selling models in the U.S. so far this year are the X3 and X5 CUVs, but that doesn’t mean Bavaria is forsaking sedans or – a variant that sells in even lower volumes – the seemingly endangered coupe.

Through the first nine months of 2020, the Audi A5 is leading the segment with 14,029 deliveries, but BMW’s four-coupe lineup accounts for more than 51% of sales in the sector. Showing the most growth, as expected are the freshest entries, the 2-Series and 8-Series, but today the focus turns to the 4-Series, which is all-new for ’21 and is likely to keep building BMW’s coupe momentum.

Before 2014, BMW offered both a coupe and sedan under the 3-Series banner, but now they’re separated and Job One for the redesigned 4-Series coupe on sale now is to further differentiate itself from the 3-Series sedan, even though they share the same engine lineup and the same underlying architecture.

Among BMW fans, the 4-Series already is well known visually, for its oversized, forward-leaning kidney grille, which started showing up in photos of the new ’21 model back in June.

“It’s very visible, very obvious,” says John Kelly, M product manager for BMW of North America. “Especially at the front end, nobody would mistake the 4-Series on the street” for the 3-Series, he says in an interview at the Monticello Motor Club track here. (2021 BMW M440i xDrive with Cognac Vernasca leather pictured below.)

That’s especially true for the 3-Series vs. the BMW 430i and the BMW M440i, which figure to be the biggest sellers in the 4-Series stable because they’re less expensive than high-performance M variants. BMW isn’t disclosing volume targets for the new 4-Series.

Besides the big grille, the ’21 4-Series is longer and wider than both the 3-Series and the previous-generation 4-Series. The new iteration also is significantly stiffer than the model it replaces.

Those attributes contribute to sharper handling – the second big way BMW intends the 4-Series to stand apart from the 3-Series.

On the test track here, the 4-Series displays its handling acumen, even on a miserably chilly, rainy, autumn day in the Catskills. It wasn’t cold enough to snow, but it felt like it.

Because of the slick conditions, I opted to ride shotgun. Tom Plucinsky, head of BMW product communications, drove. In his spare time, he’s an accomplished, veteran amateur race driver.

Everyone platooned around the track one behind the other with no passing. Another experienced driver led, providing a stream of advice via walkie-talkie – “full throttle,” “lift off the gas,” “brake hard in 3-2-1,” “stay left,” “go all the way to the right exiting this turn,”etc. etc.

The red-white-and-blue striped, painted curbing that provides an aiming point on the twists and turns was even slicker than the track itself. The advice there was, “two tires up” on the curbing, and even that was risky because the wet, painted surface was like glass.

But in Plucinsky’s capable hands, our M440i xDrive coupe (priced at $58,500 and powered by the award-winning B58 3.0L turbocharged inline 6-cyl. rated at 382 hp) handles the slippery course with ease. He twitched the steering wheel once or twice per lap without comment and nipped in the bud what would have been a splashy spin-out in my hands.

“The all-wheel drive also makes a big difference, obviously,” Plucinsky says after several “hot” laps. He points out it was so cold and wet that, despite all the power sliding, hard accelerating and hard braking, the tires never did warm up or gain much if any stickiness.

The 4-Series also gets what BMW calls Intelligent Personal Assistant, which is activated by voice command (“Hey, BMW”) or by touching a button. The updated system can recognize whether the driver or passenger is speaking and react accordingly – for instance, it can tell which side wants to change the cabin temperature. 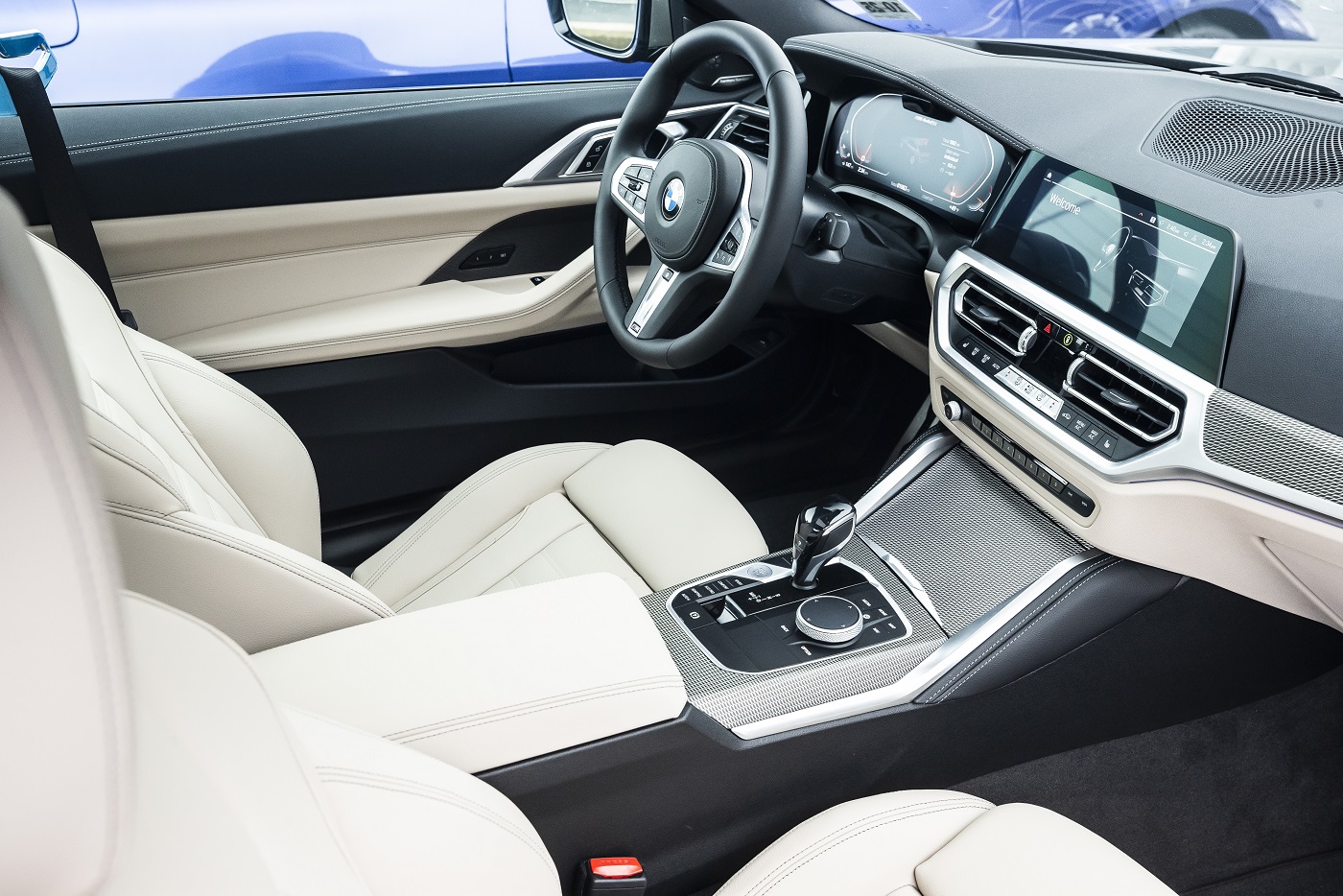 At the high-performance end of the 4-Series range, BMW decided it was OK for some visual overlap between the 4-Series and 3-Series M models. It’s interesting, considering the brand’s efforts to differentiate the 4-Series.

For display only, BMW parked a pre-production M3 Competition sedan and an M4 Competition coupe side by side at the track. Except for the number of doors, it required a long, close look to detect much difference in appearance, especially from the front.

The new M3 has what’s now become the M4-style, big upright grille, even though other 3-Series models have a lower and wider kidney grille.

From the rear, the external differences are a little more obvious, particularly the taillights. Both models have the same rear trunklid spoiler and the same appearance to the four big, blacked-out exhaust tips, two on each side.

“Since the introduction of the BMW 4-Series in 2014, feedback from customers of the coupes and convertibles has shown that they want a greater differentiation between the 3-Series sedan and the 4-Series coupe and convertible,” says Oleg Satanovsky, BMW Product & Technology spokesperson.

“M3 and M4 customers are actually quite similar to each other,” Satanovsky says. “These customers want the most aggressive styling available, so both the M3 and M4 are designed to deliver similar styling and performance, so the only choice being the number of doors you would like.”

And then there’s the varying “Levels of M” among BMW models. For example, the M2, M3, M4, M5, X5 M and X6 M and so on generally are the most powerful, track-ready vehicles for each nameplate.

Stepping down in price and capability leads shoppers to a series of models that could be described as M-light, such as the M235i, M340i or M550i – cars that represent a step up from the base models with cosmetic or performance upgrades. 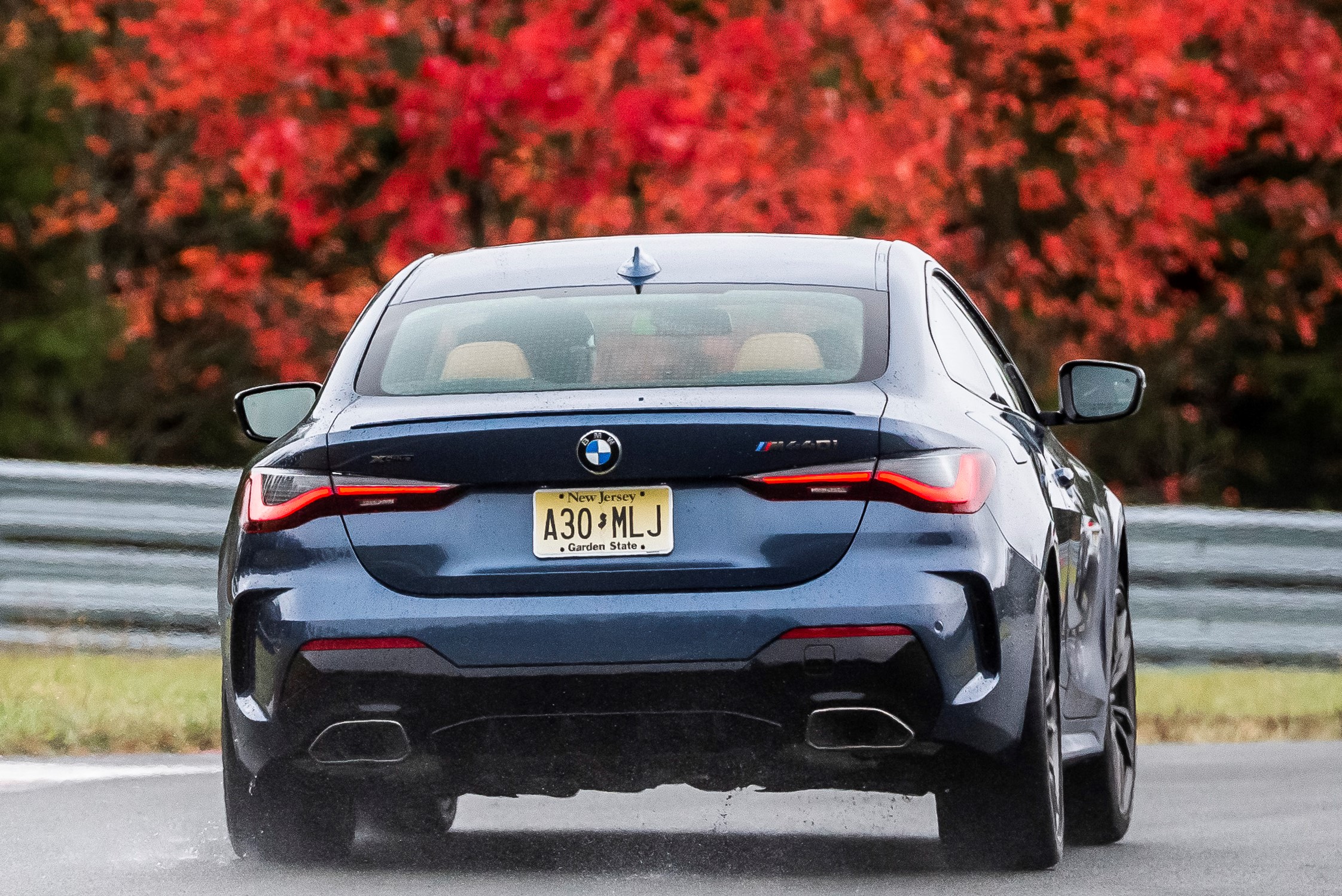 There’s even variation among these M-light models: M Performance, with more engineering by the M GmbH subsidiary than series production cars; M High Performance, everyday drivers that can be driven on the track; M CS, for Competition Sport, which is the other way around – optimized for the track but suitable for everyday use. The highest is M CSL, which BMW says is “born for the racetrack.”

Confused? Yes, Bavaria slices the bread many, many ways.

Rest assured, if you want a midsize luxury coupe, BMW has a roster for every purpose and purse. 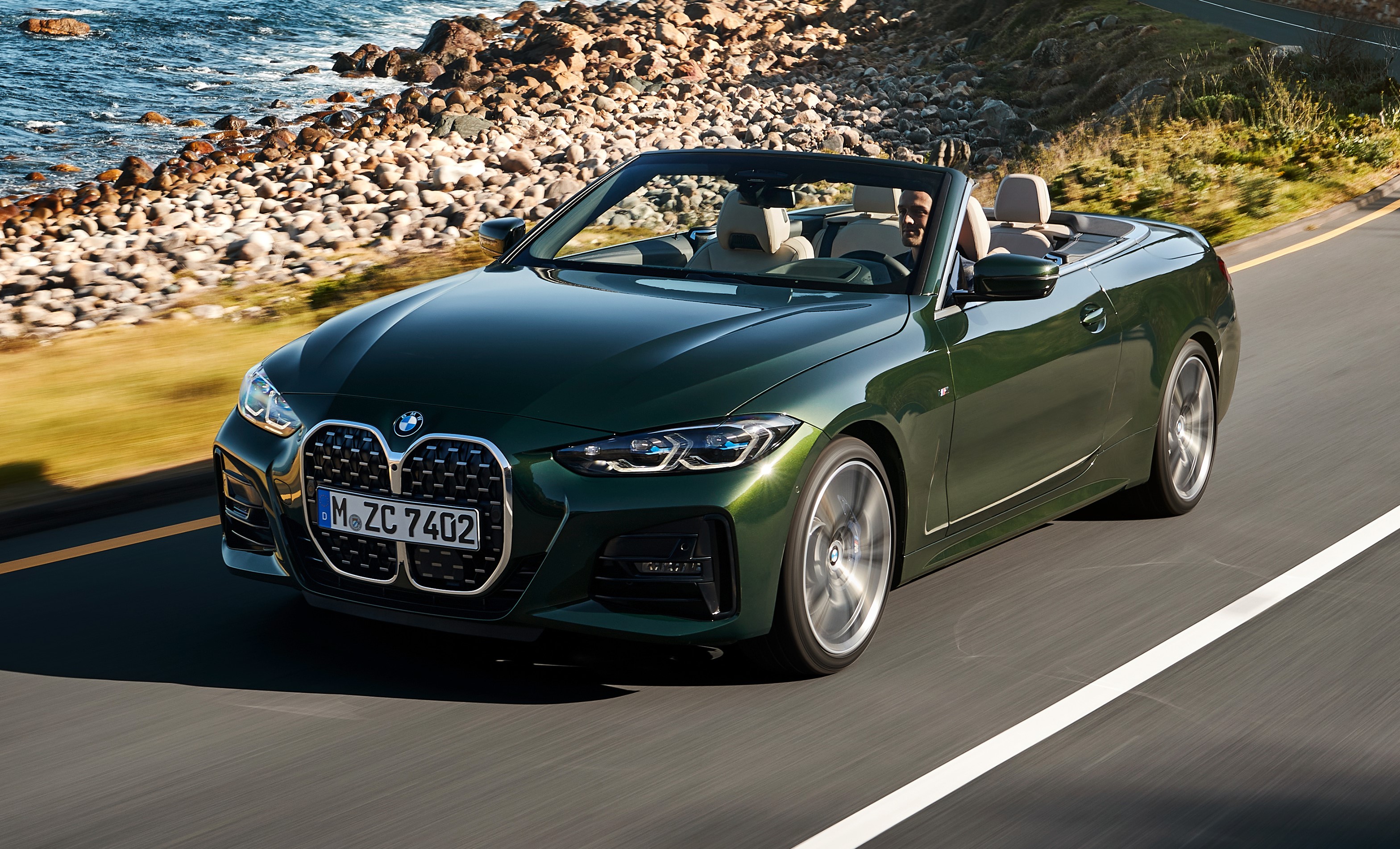 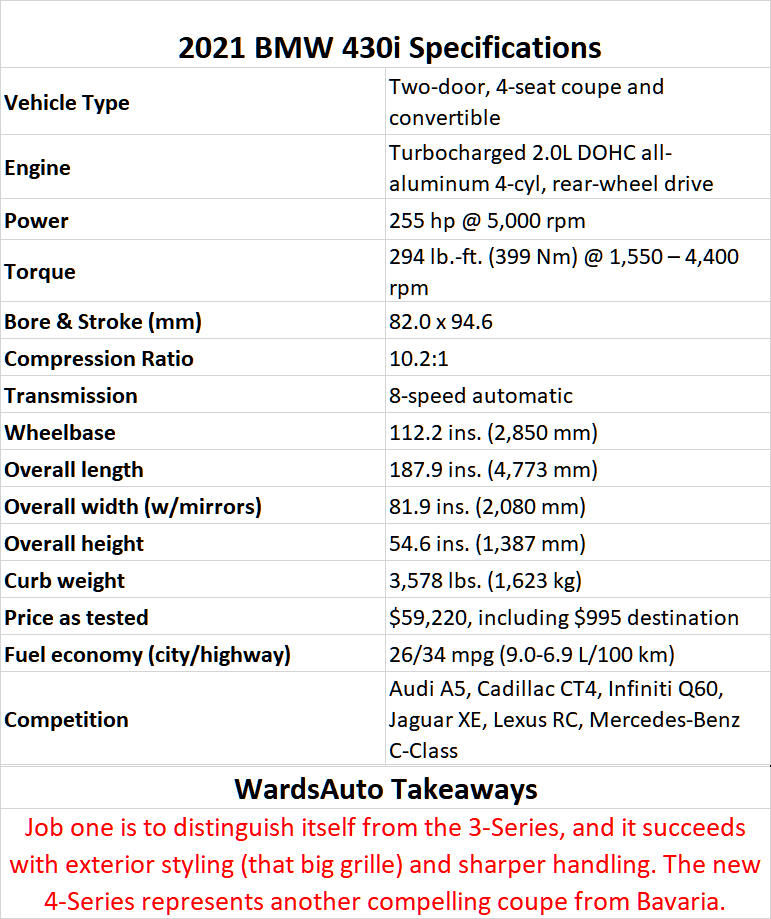