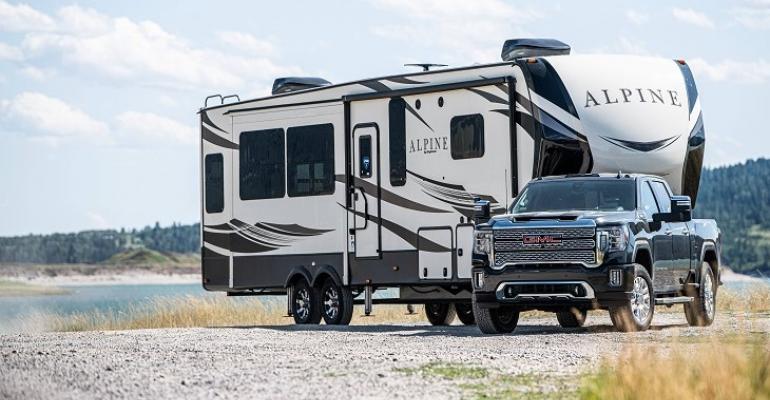 The Sierra HD drive also provided the opportunity to test GM’s all new Duramax 3.0L turbodiesel I-6 available in the ’20 Sierra and Chevy Silverado light-duty pickups.

ALPINE, WY – Bigger and bolder in every way than its predecessor, the ’20 GMC Sierra 2500 Heavy Duty pickup is a massively capable truck, purposefully engineered to perform more tasks than a framing hammer with a design sure to turn heads whether on the jobsite, campsite or back forty.

The numbers practically say it all: An SAE-rated 3,597-lb. (1,632-kg) maximum payload and 18,500-lb. (8,391-kg) maximum trailering, giving the Sierra 2500HD 4-wheel-drive crew cab all the grunt an owner would need to haul heavy loads and pull heavy equipment or recreational toys.

Sierra HDs tested along winding, hilly routes here in both Denali and AT4 trims were outfitted with an updated version of General Motors’ Duramax 6.6L turbodiesel V-8 making an SAE-rated 445 hp and 910 lb.-ft. (1,234 Nm) of torque. The engine is mated to an all-new Allison 10-speed automatic transmission specifically developed for the Sierra HD.

The 910-lb.-ft. of torque from the Duramax falls short of the industry benchmark 1,000 lb.-ft. (1,356 Nm) from Fiat Chrysler’s Cummins 6.7L inline turbodiesel 6-cyl. in the Ram HD, but GM can boast the highest trailering capability with the dually.

It is worth noting in most states pulling anything above a combined truck/trailer weight of 26,000 lbs. (11,793 kg) requires a commercial driver’s license. Pulling 30,000 lbs. (13,608 kg) here with a Sierra HD dually was a breeze. Despite all the weight, there was surprisingly little of the “trailer-driving-the-truck” sensation. But since the load required a CDL in Wyoming, testing was limited to a short, mostly closed and fairly tame route.

It also should be said the Duramax torque number is carryover from the previous generation, but the towing number improves thanks to the Allison transmission, stronger axles and a larger driveshaft. A larger, 28-in. (711-mm) fan keeps the diesel cool.

A redesigned 6.6L gasoline V-8 also is available, although the 401-hp unit with 464 lb.-ft. (629 Nm) of torque was not available for testing on this day. The engine is mated to a 6-speed automatic transmission. Horsepower improves 11%, the torque rating is up 21% and towing capability rises 18% over its predecessor. But do not expect to see many at your local GMC dealer, since 70% of Sierra HD sales are the Duramax diesel and most of the remaining gasoline models are sold to fleet operators. 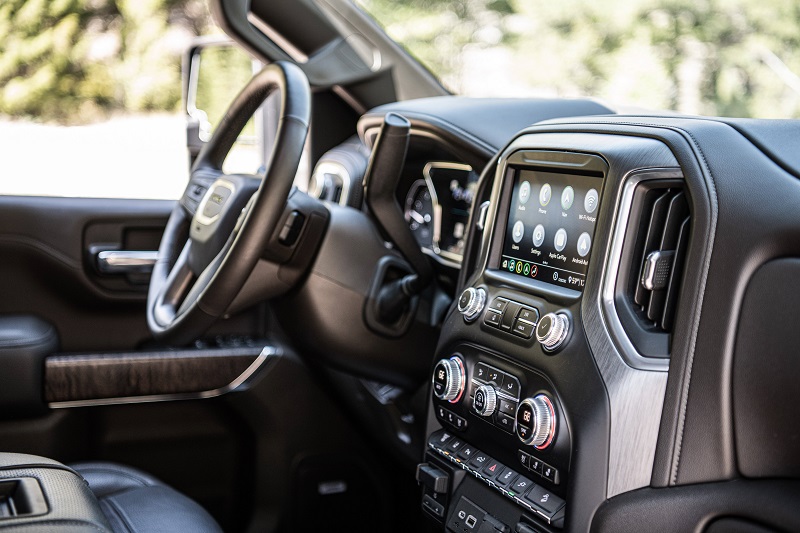 The drive here also provided an opportunity to test GM’s all new Duramax 3.0L turbodiesel inline 6-cyl. with a trailer. Available in the ’20 Sierra and Chevy Silverado light-duty pickups, the I-6 puts out 277 hp and 460 lb.-ft. (624 Nm) of torque. It is mated to a 10-speed automatic transmission.

The 3.0L Duramax will tow a maximum 9,100 lbs. (4,128 kg), and hardly breaks a sweat running a 60% grade near the majestic Palisades Reservoir while hooked to an 8,000-lb. (3,629-kg) box trailer. An off-road course illustrates how well the little diesel’s big torque is great for creeping over logs and up slippery slopes.

Combine the trailering capability of the 3.0L Duramax with the astonishing 33.9 mpg (6.9 L/100 km) achieved during separate, unladen testing in the Chevy Silverado, and it feels like GM has added a real winner to its pickup propulsion line.

The trailering experience of the Sierra HD is a definite upgrade. An enhanced GMC ProGrade trailering system installs no fewer than 15 cameras on the Sierra HD for multitude live views, including a cornering look to prevent the trailer from hopping the curb during tighter turns.

An overhead hitch view makes hooking up the trailer easier, and when the pickup is in tow-haul mode the electric parking brake will automatically engage to prevent any roll that can occur after shifting into park. A miss of just a couple inches can mean the difference between dropping the trailer perfectly onto the hitch or lining it up all over again.

But the real whiz-bang technology comes from an accessory camera that owners can install on the rear of their trailer, which marries with a tailgate-mounted camera, existing factory-equipped cameras and the 8-in. (20-cm) infotainment screen to virtually see through a trailer in tow. World-class software stitches all the images together for an unobstructed view, which helps when navigating crowded parking lots, tight turns or keeping an eye on that pesky Toyota Camry that may be following too closely.

The trailering system also pairs with an owner’s smartphone and compatible trailers to monitor and control from the palm of their hand an array of functions, such as activating the trailer’s air conditioning or water heater, and checking water tank levels and fuel levels for trailers with a generator. Trailer tests, such as lighting and pre-tow checklists, can be run conveniently from the Sierra HDs infotainment screen. 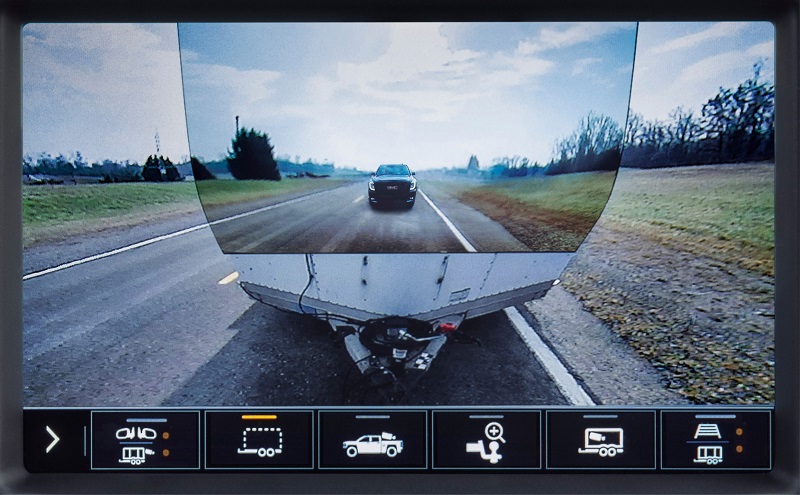 Some nifty exterior design enhancements exclusive to the HD model versus its light-duty counterpart include big-rig styling to the grille and hood; a 1-in. (25-mm) lower beltline for better visibility; long arms for the exterior rearview mirrors for safer trailering; a higher crease on the exterior door panel to accommodate signage; a lower cargo box top for fifth-wheel towing; an integrated side step to access the cargo box; and side blind zone sensors integrated into the rear corner step of the back bumper instead of the rear lamp to lower replacement costs for a busted taillight.

Against a big Western sky, the Denali’s 20-in. polished aluminum wheels and chrome grille gleam like the nearby Snake River.

Like the light-duty Sierra, the heavy-duty model can be had with GM’s innovative, 6-way MultiPro tailgate, and the integrated corner step of the rear bumper is bigger to accommodate fatter steel-toe work boots.

Inside, the Sierra HD tested here comes with familiar Denali luxury appointments, such as leather seating surfaces, authentic open-pore wood and dark-finish aluminum trim pieces. The 10-way power front bucket seats are made for long days in the saddle with heated and ventilated functionality, and the driver’s seat is positioned slightly higher for better rear view.

The crew cab model boasts generous leg, hip and shoulder room in both rows, and rear passengers in the outboard seats enjoy available heated seats and up to three power sources for devices.

An optional 15-in. (38-cm) multi-color head-up display carries trailering information, vehicle speed, navigation information and an inclinometer for road grade. There is a Wi-Fi hotspot and up front plenty of places to plug in, including a wireless power pad integrated into a massive center console area. But as with the light-duty model, the infotainment screen seems skimpy by today’s standards and some of the switchgear a bit small for a truck this size. The Sierra HD definitely is a step up from its Chevy Silverado HD stablemate but, like the light-duty version, not quite to the surprise-and-delight level of Ram trucks. Lack of adaptive cruise control is another miss against rivals Ram and Ford with the technology.

It is impressive how GM engineers struck a nice balance between ride and handling when the Sierra HD is under load and when the cargo box or trailer hitch is empty. Credit goes to an optimized body structure and new independent front suspension versus the solid axles employed by competitors that doesn’t sacrifice capability, new body mounts for better ride isolation and wider tires for an improved ride with heavy loads. Freeway hop pretty much is held in check when unloaded and the diesel’s 19.3 mpg (12.2 L/100 km) achieved on the 42-mile (68-km) drive from Jackson to Alpine isn’t shabby for a 7,721-lb. (3,502-kg) truck. Fair warning, however, these trucks do not come cheap: $78,205 for a Denali as tested and $77,210 for an AT4.

Just like their light-duty little brothers, the capability and refinement of heavy-duty pickups from the Detroit Three improve by leaps and bounds with each new generation. Whether it’s a GMC, Chevy, Ford or Ram, each presents a highly credible offering for folks who work and play hard with their pickups. The Sierra HD stands out for the unique styling and luxury interior of Denali models and aggressive, off-road machismo of the AT4. However, both are highly connected and offer a trailering experience that is second to none. 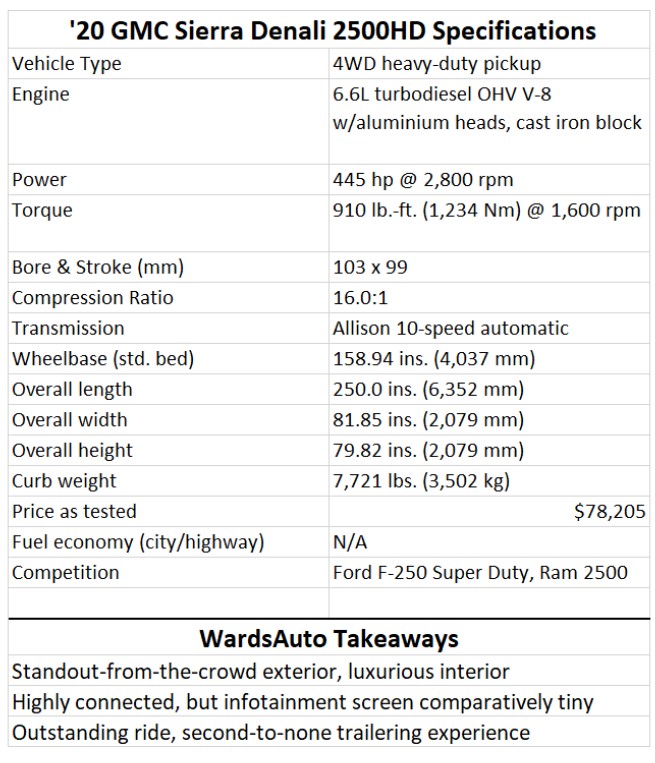