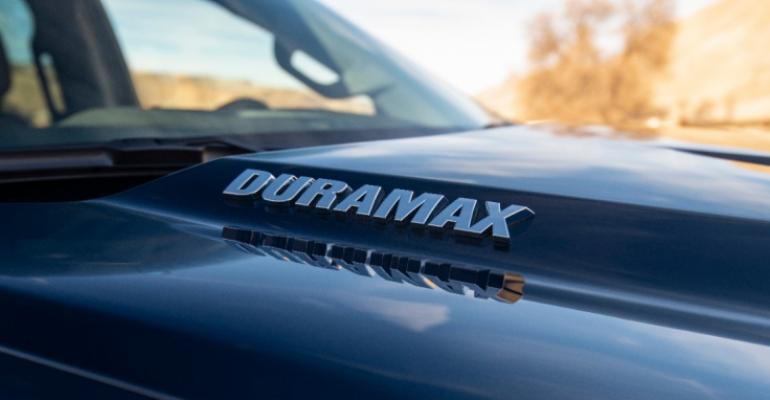 Game On as Chevy Launches 3.0L Diesel in Silverado

Chevy’s new light-duty diesel, which squares off against Ford and Ram entries this fall, is as quiet as a gasoline engine and logs some impressive fuel economy during recent testing. But we didn’t get to tow, and it lags Ram’s upcoming 3.0L in torque.

BEND, OR – Everyone likes a good race. When multiple well-qualified contenders come to the starting line with a legitimate chance to win, spectators look forward to the ensuing drama and entertainment.

For truck enthusiasts, this fall promises a lively shootout as all three Detroit automakers – for the first time ever – will be offering light-duty 6-cyl. diesel engines that are perfectly suited for quiet, comfortable cruising and long-haul towing.

The engines from Fiat Chrysler, Ford and General Motors – all displacing 3.0L – will square up during testing for the 2020 Wards 10 Best Engines & Propulsion Systems competition this fall.

Ford has a head start, as its Power Stroke diesel launched last year in the F-150 and earned a spot on the 2019 list. FCA’s EcoDiesel earned three trophies starting in 2014, and its next-generation 3.0L goes on sale this fall in the Ram 1500.

Filling out the field is GM’s long-awaited Duramax inline 6-cyl. diesel, which arrives this fall in the ’20 Silverado and GMC Sierra.

After test drives here in the Silverado, we can confirm the new light-duty Duramax assembled in Flint, MI, is virtually clatter-free and primed for a U.S. market in love with pickups.

Those truck shoppers seem to have a “bigger is better” mentality, which means the efficiency gains inherent with diesel engines would go a long way in reducing tailpipe emissions and saving money at the pump.

For years, fullsize truck buyers opted for gasoline V-8s, and they’d be lucky to top 20 mpg (11.8 L/100 km) during routine driving. The bigger the load and the heavier the trailer, the worse the observed fuel economy. 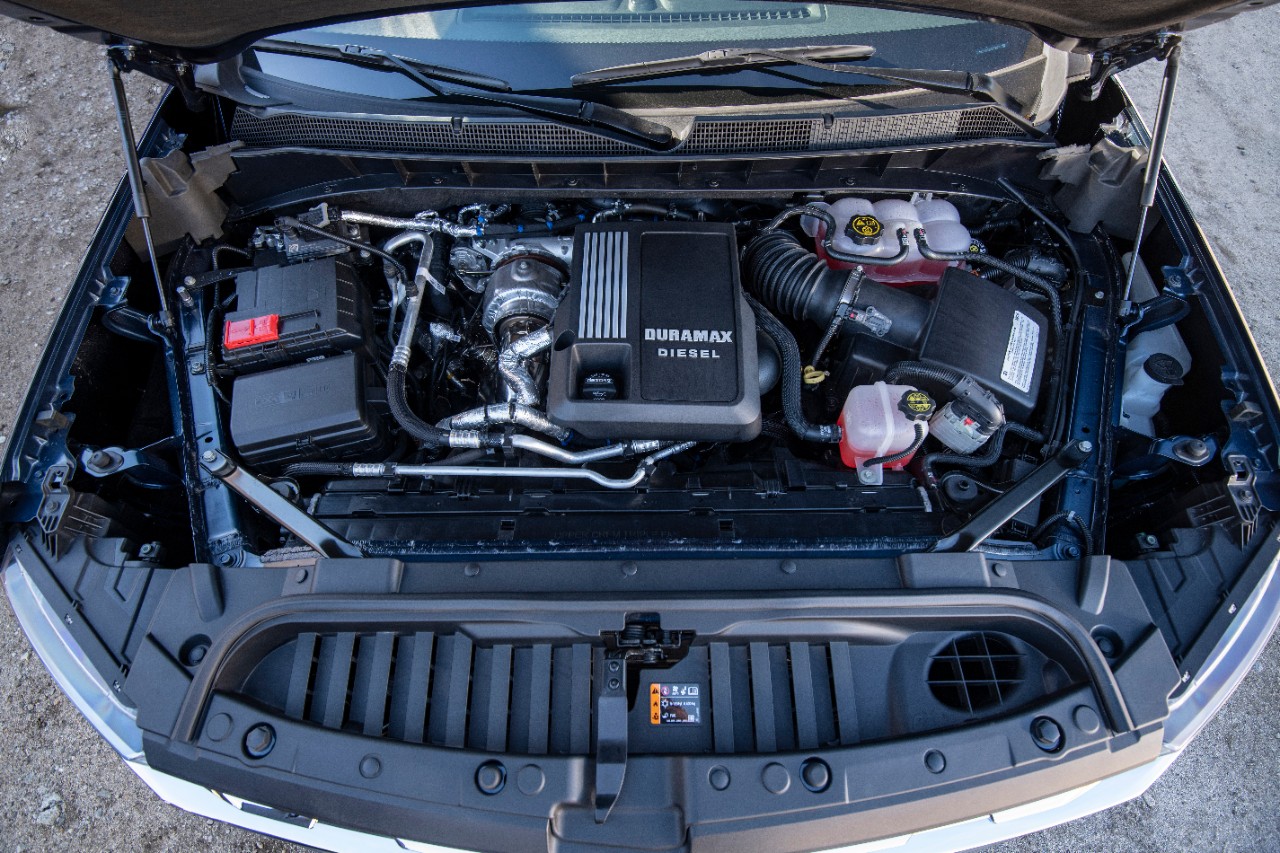 Gasoline V-6s have become popular in recent years with some of these fullsize truck buyers, but observed fuel economy often still hovers in the mid-20s.

So along comes the new generation of light-duty diesels, powered with more energy-dense fuel than gasoline and capable of some truly remarkable fuel economy, while delivering V-8 levels of torque.

One can speculate how to achieve such results in a vehicle with poor aerodynamics weighing 2.5 tons and benefiting from no other electrification besides stop/start. This light-footed editor was pleased to see 33.9 mpg (6.9 L/100 km) on the same route and did not suffer the horn of scorn from impatient locals (see photo below).

In routine driving, the Silverado with its light-duty Duramax stacks up nicely to the F-150 Power Stroke. Both engines are surprisingly quiet – especially for ears familiar with the cantankerous mills of the 1980s – and they rev without fuss when called upon.

Sorely lacking in the Silverado test drive was the ability to tow. Chevy had assembled multiple trailers of various weights for a two-day event that included towing with the new heavy-duty pickups, but inexplicably none of the flat-beds or box trailers was ever hitched to the light-duty Duramax 3.0L for media testing. 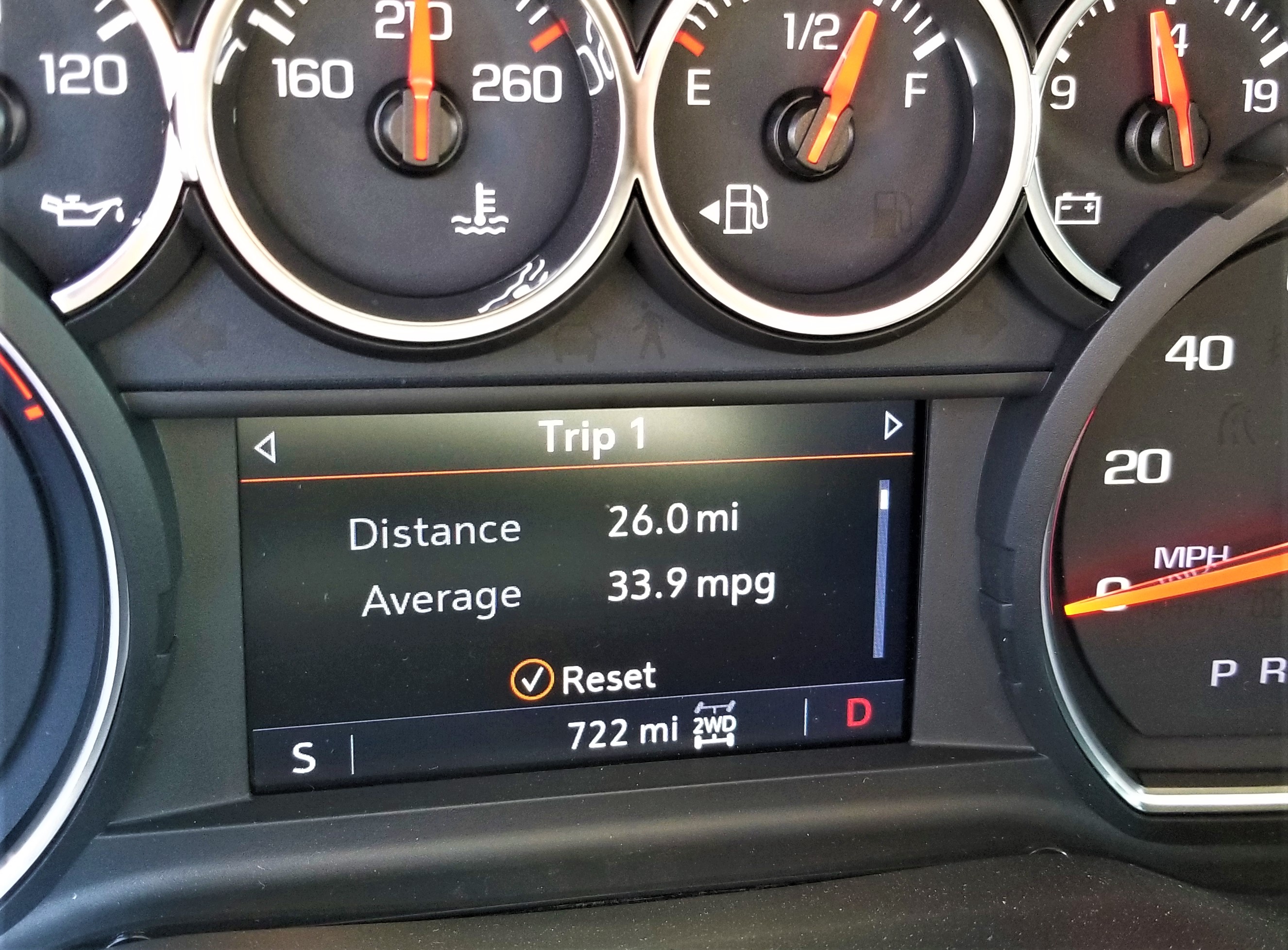 These numbers mean something to truck buyers who own boats, campers, jet skis, dirt bikes, snowmobiles and landscaping companies. With growing popularity of three-row utility vehicles, the ability to pull something truly is the only good reason these days to purchase a body-on-frame pickup truck.

Incidentally, the 5.3L gas V-8 was found under the hood of 84.9% of model-year ’18 Silverados sold in the U.S., according to Wards Intelligence data. 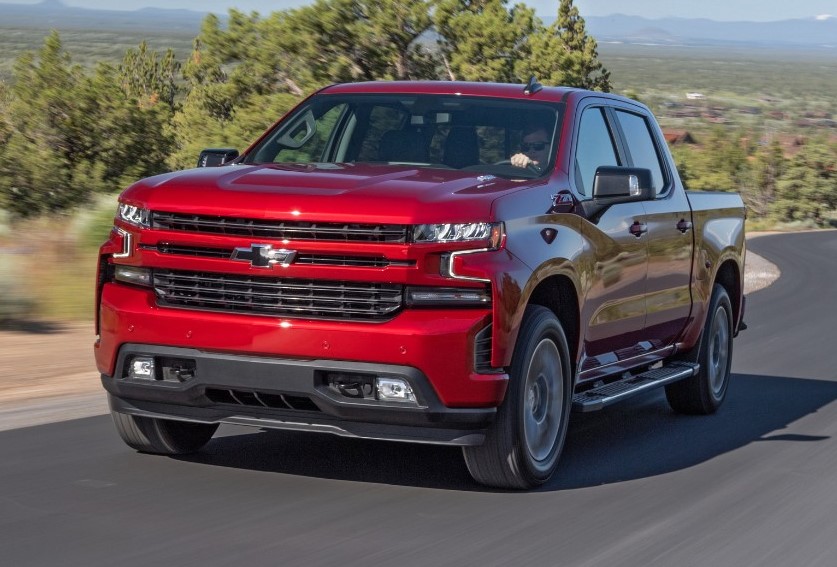 The 3.0L Duramax is priced the same as the 6.2L gasoline V-8 that represents the flagship powertrain for the Silverado.

Scheming Volkswagen engineers may have given Rudolf Diesel a black eye, but there’s no arguing the merits of compression-ignition engines as workhorses in commercial vehicles, tractors, heavy equipment and pickup trucks of all sizes and capabilities. 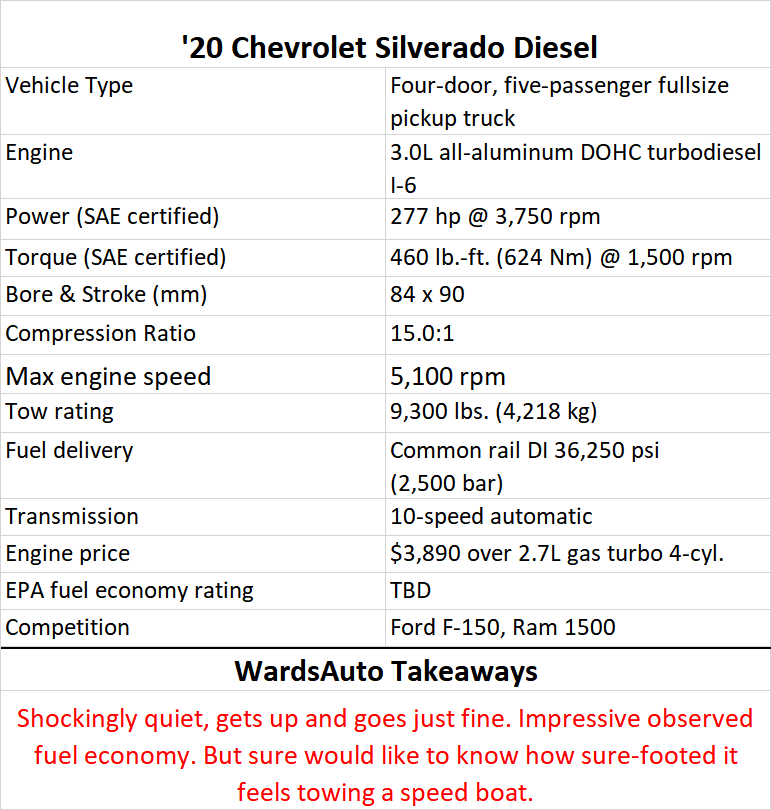